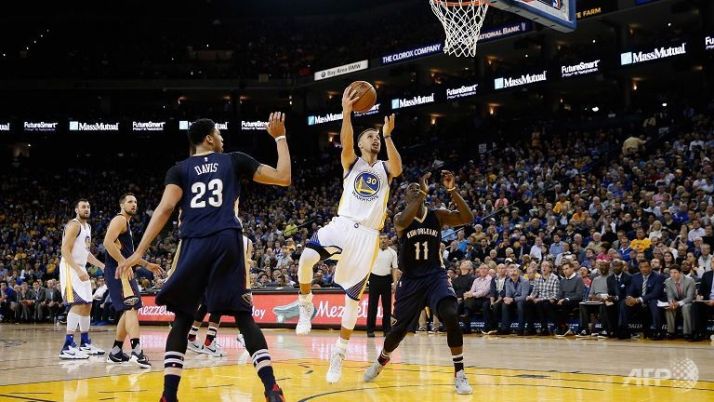 Golden State star Stephen Curry had plenty to celebrate on Monday, pouring in a game-high 27 points on his 28th birthday as the Warriors stayed perfect at home this season with a 125-107 victory over the New Orleans Pelicans.

The Warriors improved to 60-6 — becoming the fastest team in league history to reach 60 wins and the first since the 2007-09 Boston Celtics to record 60 wins in back-to-back campaigns.

Curry was feted with songs and chants to celebrate his birthday.

But it was Australian big man Andrew Bogue who sparked a third-quarter surge with a rare three-pointer — the third of his career and his first since March 8, 2013 — followed by a blocked shot at the other end.

His efforts ignited a 13-0 scoring run that put the Warriors well on their way to a 49th straight regular-season victory at home in Oakland, California, a streak dating back to last season.

The Warriors secured the Pacific Division title on their day off on Sunday thanks to the Los Angeles Clippers’ loss to Cleveland. They have won back-to-back division titles for the first time since 1975 and 1976.

The Utah Jazz kept up their push for an NBA playoff berth with a 94-85 victory over LeBron James and the Eastern Conference-leading Cleveland Cavaliers.

Rodney Hood scored 28 points and Shelvin Mack added 16 oints, 10 assists and seven rebounds to lead the Jazz, who were without leading scorer Gordon Hayward who missed the contest with plantar fasciitis.

James scored 23 points and Kyrie Irving added 15 and Kevin Love 12 for the Cavaliers, who had won three straight coming into the game.

Cleveland looked primed to end their road trip on a high note when the raced to an 11-4 four lead courtesy of an alley-oop dunk from James.

But Utah battled back as Mack drained a three-pointer and French center Rudy Gobert converted a three-point play to key a 13-2 run that put the Jazz up 19-15.

Cleveland used a 14-3 run to take a slim lead late in the third and they went into the final quarter with the score tied at 66-66.

Trey Lyles scored 10 of his 12 points in the fourth quarter for Utah — before he was ejected for a flagrant foul against Channing Frye with less than four minutes to play. Frye was also tossed after retaliating with a head-butt to earn his second technical.

With the victory Utah remained two games behind the Houston Rockets and Dallas Mavericks — both winners on Monday — for the last Western Conference playoff berth.

The Cavs are two and a half games ahead of Toronto in atop the East.

Trevor Ariza and Patrick Beverly set the tone with six three-pointers between them in the first quarter as the Houston Rockets thrashed the short-handed Memphis Grizzlies 130-81.

The Rockets connected on 16 of 33 attempts from long range. Ariza finished with 16 points, one of nine Rockets players to score in double figures in the wire-to-wire win.

The last time Houston had nine scorers in double figures was in 1993.

In Toronto, the Raptors once again brought out the best in Chicago reserve forward Doug McDermott, who scored a team-high 29 points in the Bulls’ 109-107 victory.

“It’s something about playing one of the top teams in the East gets you motivated,” said McDermott, who had a career-high 30 points when the teams last met in February in Chicago.

The Bulls led by as many as 13 points early in the fourth quarter but the Raptors, who had won 15 of their previous 16 home games, twice cut the deficit to one in the final 20 seconds.

Enes Kanter scored 26 points to lead the Oklahoma City Thunder to a 128-94 victory over the Portland Trail Blazers, avenging a January defeat.

It was the first time since January 4 that a player other than Kevin Durant or Russell Westbrook led the Thunder in scoring.

Oklahoma City’s stars did their part, however, with Westbrook posting his 12th triple-double of the season with 17 points, 16 assists and 10 rebounds — all with no turnovers.