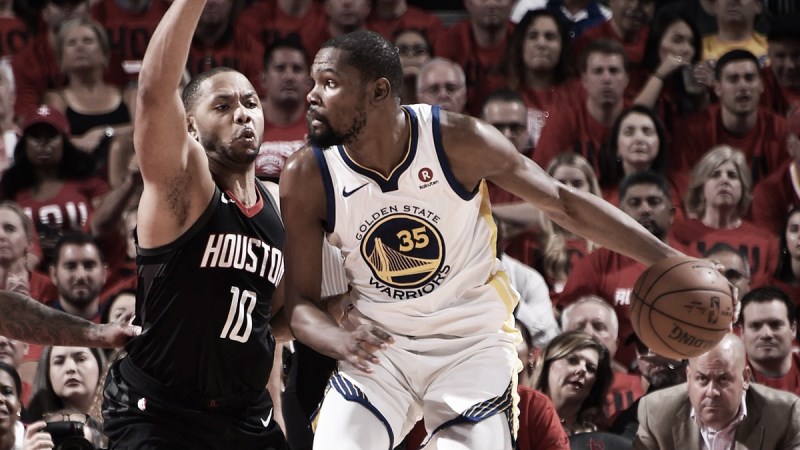 Two-time NBA Most Valuable Player Stephen Curry said there’s “no panic” in the Golden State Warriors locker room after a 22-point loss to the Houston Rockets in game two of the Western Conference finals.

Curry looked significantly off his game on Wednesday night, connecting on just seven of 19 shots from the floor, including one of eight from three-point range. He finished with 16 points but never established the remarkable range that can stretch opposing defenses to the breaking point.

His 16 points — on the heels of an 18-point performance in game one — marked the first time Curry has failed to reach at least 20 points in consecutive playoff games since the 2016 NBA Finals, when he was nursing a knee injury.

His struggles were mirrored by most of his teammates. Kevin Durant was a predictable rock with 38 points, but Klay Thompson scored just eight, Draymond Green six and Andrea Iguodala five as the Warriors offense stagnated.

“No panic,” Curry insisted after the game. “No houses-on-fire type of mentality in our locker room. We’re in pretty good shape right now.”

The Warriors, indeed, headed home to host games three and four on Sunday and Tuesday having shocked the 65-win Rockets in game one.

And Warriors coach Steve Kerr said he was certain Curry would find his groove.

“I’m not worried about Steph,” Kerr said. “He’s the kind of competitor and player who will bounce back from a tough night.”

Both Kerr and Curry himself were adamant that Curry’s troubles were unrelated to the sprained knee ligament that sidelined him for 16 games until his return in the second game of the Warriors’ second-round series against the New Orleans Pelicans.

“I’m feeling great,” Curry said. “I didn’t find a rhythm early. I had some decent looks from three that could have changed the momentum of the game of the game early in the first half.”

Curry said he and the Warriors need look no further for inspiration than Durant.

“He has been amazing,” Curry said. “I think we all need to feed off that focus and that determination. If he can continue to do what he does, I’ll shoot the ball better and play better defense, other guys will get involved and we’ll be in great shape.” – Agence France-Presse