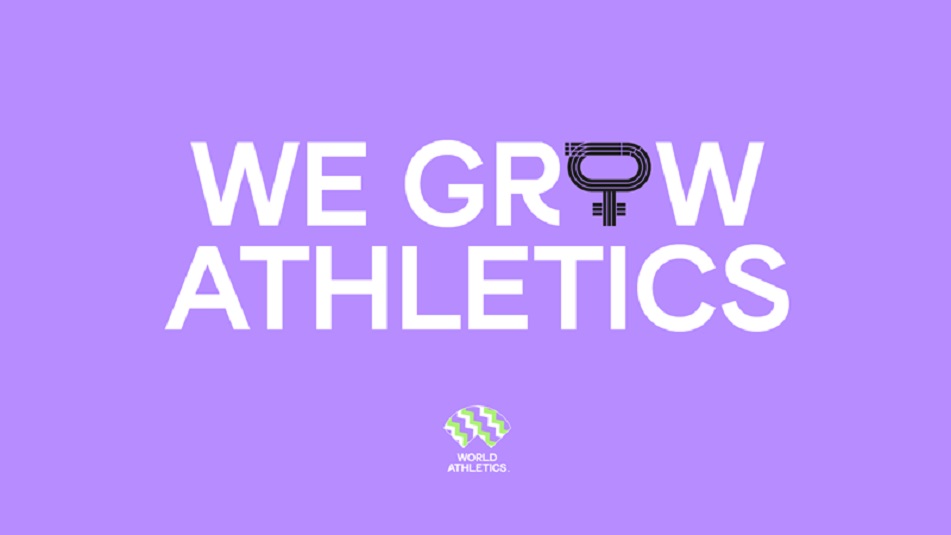 To coincide with International Women’s Day on 8 March 2021, World Athletics is delighted to announce the launch of #WeGrowAthletics, a campaign designed to build on the strides the sport has taken towards greater gender equality.

As part of the launch, World Athletics is making a number of pledges to commit to further advance the role of girls and women in athletics in three core areas of the sport – empowering women in leadership positions, breaking with traditions and shining a spotlight on women’s stories across its platforms.

This pledge has been the result of an internal review across World Athletics’ departments and work with key stakeholders and partners to identify areas in which more progress can be made.

All digital platforms will feature a new version of World Athletics’ logo – inspired by the colours of the suffragette movement – for the week of 8-14 March and our feature content across all channels will celebrate the rich and inspiring stories of women in our sport, told and illustrated by women. There will also be a specially designed emoji running alongside the #WeGrowAthletics hashtag on Twitter.

The pledges have been brought together under three core pillars:

#WeGrowAthletics by empowering women to pursue leadership positions
In line with the 2016 Governance Structure Reform embedded in the sport’s constitution, World Athletics will continue its work to grow the number of women in leadership positions across the sport and remains committed to its Council being gender-balanced by 2027. The first step towards this goal was taken at the 2019 elections where we appointed our first female Vice President, a voting female and male athlete on Council and increased female representation on Council to 30%. Much of the work towards this goal is being done through our areas, led by a Gender Leadership Taskforce.

#WeGrowAthletics by breaking with traditions
World Athletics pledges to review age-old traditions around the presentation of women’s performances and achievements to emphasise the importance of women’s competition. There is often an unconscious bias in traditions that, until properly explored, can go unchecked. We have a number of commitments around how we present women’s performance results, including ending our World Championships with a women’s event for the first time at the World Athletics Championships Oregon22. We will continue to explore and review our traditions.

#WeGrowAthletics by ensuring a platform for women’s voices and tackling online abuse
World Athletics pledges to put greater emphasis on how and by whom women’s stories are told on its platforms together with making them a safer space for everyone and will continue to work with social media platforms to eliminate and remove sexist, racist and other inappropriate comments and posts in order to make these platforms inspirational places for women to share stories.

Commenting on the initiative, World Athletics President Sebastian Coe said: “Gender equality should no longer be a theoretical discussion in any organisation. We should all be taking action by identifying barriers, reviewing our policies and practices and creating clear pathways for women to rise, contribute and participate at all levels. Athletics has historically led the way in gender equality since the beginning of the professional sports era in the 1980s with an equal programme of events and prize money for both women and men. We want the strides we have made in our sport, thanks in most part to trailblazing women on and off the field of play, to inspire others.”

He added that: “We have much more to do but I am confident these pledges, together with those of our partners and stakeholders, will allow more women to hurdle historically established barriers on the way to greater gender equality.”

World Athletics is proud of its partners and stakeholders, many of whom will be supporting this pledge now and into the future. Partners and stakeholders who will be making their own supporting pledges on International Women’s Day 2021 include Mondo, Fifty Digital, World Athletics Productions and the World Athletics Championships Oregon22. We would also like to thank Twitter for their support in creating a strong and striking emoji for this campaign and the continuing work we will do in this area.

A number of Area Associations are celebrating International Women’s Day including the NACAC (North America, Central América and Caribbean) region which is encouraging all their federations to participate in a one-mile walk or jog with those participating incorporating shades of purple in their attire.

In South America, they will be holding a Gender Leadership Conference for all their federations with keynote speeches from World Athletics Vice President Ximena Restrepo and Brazilian former athlete and Manager, Maria Magnolia Figueiredo. In addition, many of our 214 Member Federations are celebrating and supporting International Women’s Day with a variety of activities.