Donations of artefacts from current world record-holders Mondo Duplantis, Mary Keitany and Gudaf Tsegay highlight today’s opening of the Indoor Athletics and Out of Stadia Collections room in the 3D virtual Museum of World Athletics (MOWA).

The new gallery in MOWA, the world’s first online fully virtual sports museum, has been created with two distinct spaces. One half of the room is designed to reflect the theatre-like drama of an indoor athletics arena. The other brings the outdoors inside MOWA, with multi-terrain natural elements of cross country courses, and the tarmac routes of athletics’ road events

The new displays in glorious 360˚ 3D – supported by text in English, French and Spanish languages, and illustrated by stunning photographs and videos – celebrate the history of indoor athletics, cross country, road running and race walking, dating back to the early 1800s. 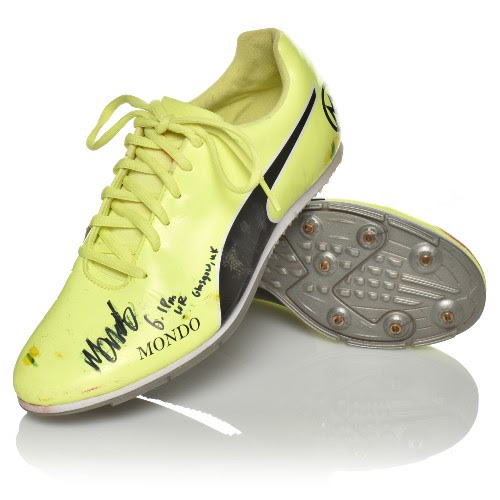 Sweden’s high-flying Mondo Duplantis has donated the pair of pastel-yellow spikes which he wore when soaring to the current 6.18m world pole vault record indoors in Glasgow, UK, on 15 February 2020.

Kenya’s Mary Keitany, the world marathon record-holder (women-only race), who retired this year, has provided the singlet, shorts and shoes in which she ran 2:22:48 to win her fourth New York City Marathon title on 4 November 2018.

Gudaf Tsegay of Ethiopia has gifted the collection the pair of spikes she wore when taking more than two seconds off the world indoor 1500m record of 3:55.17 in Lievin, France, on 9 February 2021.

In total, new artefacts from 28 global champions and/or world record-breakers, representing 17 countries from across all six continental areas, are entering MOWA today (all athletes and countries are listed below).

To mark the opening of the new gallery, seven World Athletics Heritage Plaques have also been announced. The recipients in Asia, Europe, NACAC and South America have been honoured across three plaque categories: Competition, Culture and Legend.

The new athletes and artefacts joining the displays across MOWA for the first time today include:

Today, and in the coming weeks, we will focus in greater detail on the careers of many of the outstanding retired champions and record-breakers who have recently made donations to our Indoor Athletics and Out of Stadia Collections.