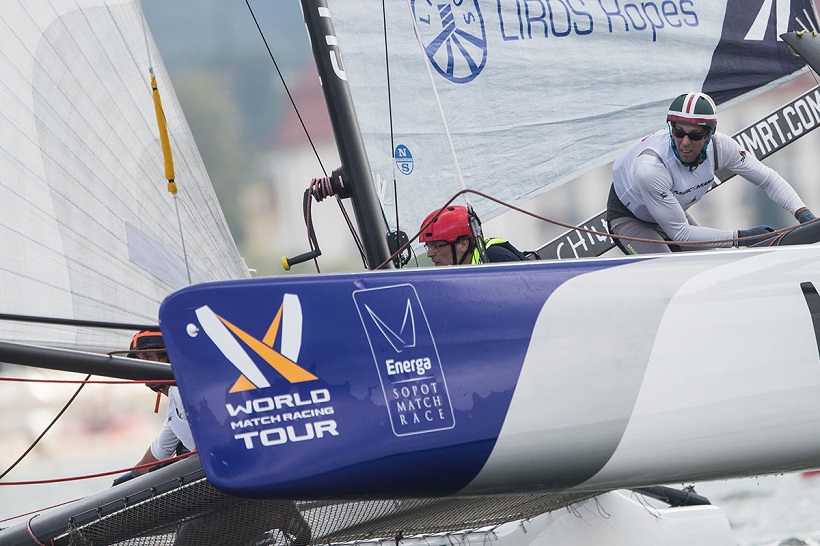 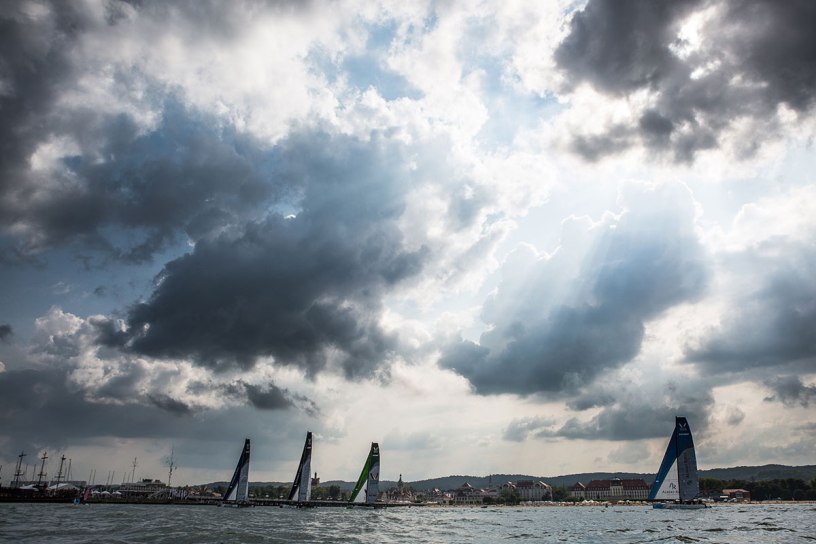 Young Swede Nicklas Dackhammar and his Essiq Racing came out all guns blazing to post a 2-1-1 on the opening day of Energa Sopot Match Race, the first event in the new World Match Racing Tour season.

Crowds swarmed the pier in this famous Polish resort town, but it wasn’t until the afternoon that a light north-easterly breeze filled in. In this only four races could be held, with the six teams rotating through four boats in this Fleet Race Qualifying round, before the Baltic glassed out and the competition was canned for the day.

While Dackhammer’s experience in the high performance M32 catamaran paid dividends, Chris Rast’s EFG Bank team also did well posting a 1-3-3-3, despite this only being the Swiss team’s second ever event in the challenging Swedish-built multihull.

With Eric Monnin’s Albert Riele Swiss Team winning its sole race today, it was felt that the Swiss lake specialists got the opportunity to shine in ‘their’ conditions.

“We started off strong with a bullet, which we had to fight for,” recounted Rast. “We have a new guy sailing with us, and if you change one cog, it changes the whole gearbox. We are trying to figure that out communications-wise.”

Rast felt that because they were still having to sort out their boat handling in the tweaky lightning fast M32, he and his crew had spent too much time with their head ‘in the boat’. “It is very shifty here and it puts an emphasis on knowing what is going on with the breeze rather than perfect boat handling. We focussed too much on boat handling rather than the breeze, so that cost us a couple of points. Otherwise we are pretty happy.”

Rast is impressed with the Polish stopover on the World Match Racing Tour and the enthusiasm for the spectators who typically ram Sopot’s Molo pier, especially this year with the M32 catamaran fleet making its debut at this annual regatta.

“It is a really cool venue – there is a lot of public, it is a holiday resort and there’s a good vibe,” Rast continued. “Everything is in place. The only thing lacking is the one thing we can’t control: the breeze.”

Rast, along with Australian Torvar Mirsky’s Mirsky Racing Team was the only team that got to sail the full complement of four races. Monnin and Australia’s Sam Gilmour only got to race one.

Tomorrow, Energa Sopot Match Race will launch into it’s Round Robin match racing phase were all six teams, also including Dane Joachim Aschenbrenner, will get to line up one-on-one. Hopefully the wind on the Baltic will be more forthcoming.