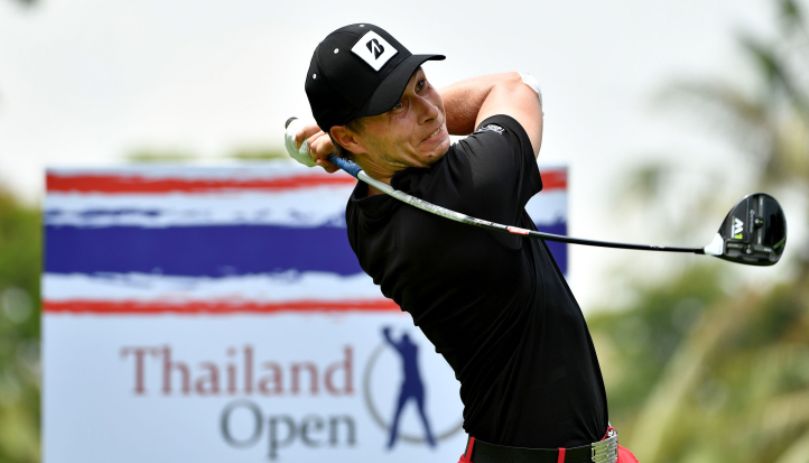 Local prospect Rattanon Wannasrichan flew his country’s flag high by taking a share of the first round lead with Janne Kaske of Finland in the Thailand Open on Thursday.

The leading duo signed matching nine-under-par 62s to lead by two shots from Panuphol Pittayarat of Thailand in the US$300,000 event, which is making a return onto the Asian Tour schedule after an eight-year lapse.

Thai veteran star Prayad Marksaeng posted a fine 65 to trail by three shots alongside Gaganjeet Bhullar of India, who was bogey-free at the scenic Thai Country Club.

Reigning Order of Merit champion Scott Hend of Australia signed for a 69 to lie seven shots off the pace.

The Thailand Open, inaugurated in 1965, is also the first leg of the newly launched Panasonic Swing, which provides a bonus pool across five designated tournaments.

It was pretty awesome out there. I got off to quite a slow start but I birdied the tough par-three sixth hole and made an eagle on the par-five seventh hole. Things started to roll for me after that. I had a lot of looks from like 10 to 20 feet all day and I felt like I was making all of them. It’s definitely one of the best putting rounds I have ever had.

I didn’t make a super long one but I made a whole lot of makeable birdie looks. I had a great drive on seven and then a six-iron left and right in line with the pin from about eight feet. I made the eagle putt and that really got things going.

It was just solid. I think this golf course suits me pretty well. It’s been soft so it’s playing a little bit longer. I hit it quite far and I am still getting wedges in my hands almost on every hole. I can set up a lot of birdie opportunities for myself if I drive the ball well.

I live in Bangkok and I play here quite often. I think I have got like 15 rounds here overall. I am used to being out there and I’ve shot some low scores here before. It feels great to be playing well, especially coming in to the tournament as a sponsor’s invite.

To be honest, I haven’t been playing well for months but I sort of got my hopes up a little bit at the beginning of the week. I had a few practice rounds and I felt like I found something in my game again. I knew I have the capability to shoot a low score out there.

Everything needs to be good to shoot a 62 obviously but I still made bogeys out there. I made a mistake on the 18 and finish the round with a bogey which was disappointing. I wasn’t thinking much out there. I saw the leaderboard but didn’t bother about how much lead I had and all. Looking forward to the next three rounds now!

I putted solid today. I sank a 15-footer for birdie on my last hole on nine which was my longest putt. I only two-putted on two holes. The rest of the holes I needed only one putt each. The putter was really hot. I needed only 20 putts in total.

My game has been feeling good since finishing fourth in Chinese Taipei last month. The course is playing soft due to the rain yesterday and it was an advantage for me. It’s easier to hit iron shots because you can attack the pins and try to hit it closer.

This is my best ever 18-hole score on the Asian Tour. I am really pleased with how I played. I will keep to the same game plan and try to hit my iron shots on the greens. I play this course only about once every year. Course knowledge is not really an advantage for me but I do feel comfortable every time I come to play on this course.

It was a hot front nine. I hit the ball good, rolled it well and I took all my chances. I chipped in from 20 yards for birdie on the 10th hole which was very good too. The day kind of died off a bit and then I birdied the par-five 14the hole. I missed a very good chance on 15 for birdie. I made a mistake on 16 for bogey, hit a bad shot and didn’t get up and down. Overall, eight birdies and only one drop shot, so I am happy.

I was just having fun out there. I got off to a great start, with four birdies in a row from the second hole. I was enjoying the golf course, the weather and everything out there. This has become my home course just three weeks ago actually. The course feels differently from what I am used to because it has been raining a lot these few days.

But having said that, I feel very comfortable when I play on this course. I love it. I kept the ball in play and I took a lot of chances. I just hit a lot of good shots and putted well. Same thing for me tomorrow, I will just go out and enjoy the game, have fun and keep the ball in play.

The game’s feeling good. I hit the ball very good and I gave myself a lot of birdie opportunities out there. I putted very well too. I holed about four to five crucial putts which helped. I started pretty solid. I birdied the first and third hole so that gave me a lot of confidence and some momentum heading into the round.

The course is in a good shape. The greens are rolling smooth. I am looking forward to the next three days. I think my longest putt was on my first hole on 10 where I nailed a 25-footer. That gave me a good feeling for today. I sank a 12-footer for birdie on 17 as well. It was a crucial putt downhill right to left. It was a good putt.

My best birdie would be on the fourth hole. I hit a driver off the tee and then a six-iron to about 20 feet before making a little curler from right to left. You need to give yourself good looks on the greens to score on this course. As long as you’re on the correct side of the flag and get to a good start, you should be able to do well.

It’s a good to see such a prestigious event back on the Asian Tour schedule. Thailand is the home of a lot of good Asian Tour players and it always gives us a lot of happiness playing in this part of the world.

Scores after round 1 of the Thailand Open being played at the par 71, 7097 Yards Thai CC course (am – denotes amateur):