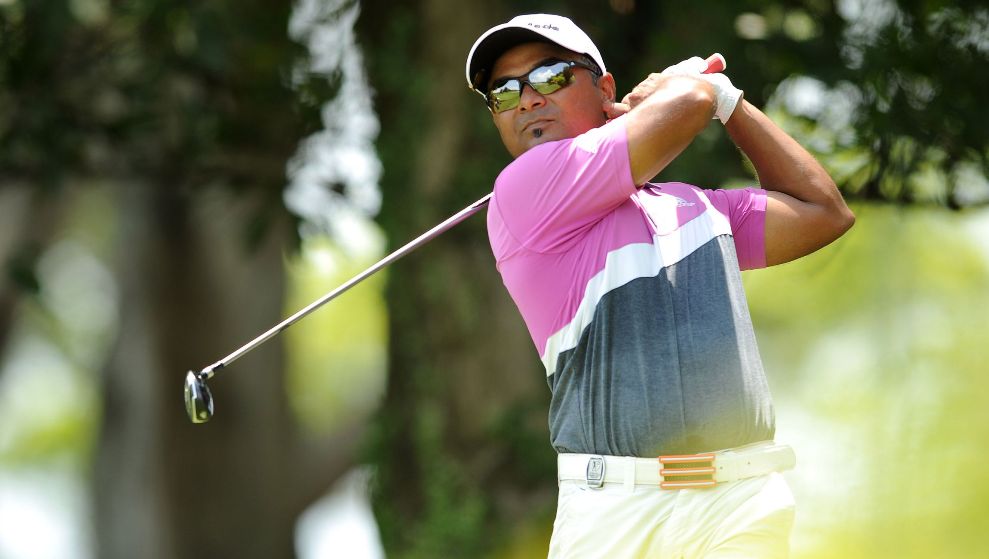 Rahil Gangjee’s best result in seven years at the US$1.5 million The Championship at Laguna National on Sunday has given him hope of ending a long 10-year title drought on the Asian Tour.

The amiable Indian made a strong debut on the Asian Tour when he won in China in 2004 but has since come up short in his bid to land a second victory on the region’s premier Tour.

Gangjee was in the thick of contention at The Championship in Singapore before settling for fourth place. He took pride in his performance which was his best result since finishing third at the 2007 Hero Indian Open.

“My game has been pretty good. I think it’s my physical ability to carry on which has been tested these last few weeks. Overall I am really very happy because it is really difficult to stay focus in the heat. You get more and more tired towards the end of the round so I’m glad with how I finished,” said Gangjee.

He enjoyed a late flourish by shooting five closing birdies for a career low of 19-under-par 269 to finish three shots behind champion Felipe Aguilar of Chile, who produced a stunning 62, which included an eagle at the last, to win the title.

“The last few holes went by in a hurry. My heart was beating fast on the 17th tee when I hit that six iron. It ended on the edge of the green and did not move from there. I kept myself in it and it was a bonus that the (birdie) putt went in. I think this is my best finish so far and my best four round score ever,” he smiled.

The commendable result earned him US$75,000 which propelled him to fourth place on the Asian Tour’s Order of Merit. Countryman Anirban Lahiri, who finished sixth last week, continues to lead the rankings following his victory at the CIMB Niaga Indonesian Masters two weeks ago.

Gangjee and Lahiri are among four Indians in the current top-10 of the Merit list which includes two-time Asian Tour winner S.S.P. Chowrasia (7th) and young prospect Rashid Khan (8th) who won the season-opening SAIL-SBI Open on home soil.

The 35-year-old Gangjee will have extra motivation to land a second Asian Tour title as his season’s collection of US$103,636 will be good enough to secure his playing rights for 2015.

EurAsia Cup hero Lahiri, who contributed two points in Team Asia’s dramatic draw with Europe in Malaysia in March, stayed at the top of the rankings following another fine performance. He also rose two rungs to 65thon the latest Official World Golf Ranking.

“I have been playing well. It was obviously an important week for me so I am glad I played solid all week. Everything seems to be working out for me. It’s been good overall so I am very happy with my game right now,” said Lahiri, who leads with US$240,900.

Rikard Karlberg of Sweden, who finished tied 11th at The Championship, stayed in second position on the Order of Merit with US$143,400 while American David Lipsky moved to third place after finishing tied second last week to raise his season’s haul to US$141,712.

Baek Seuk-hyun of Korea is fifth on US$92,309 while Richard T. Lee of Canada, winner of the Solaire Open in the Philippines, sits in sixth place on US$88,808.

The Asian Tour will travel to the ICTSI Philippine Open next week where the US$300,000 event will be played at Wack Wack Golf and Country Club from May 15 to 18.