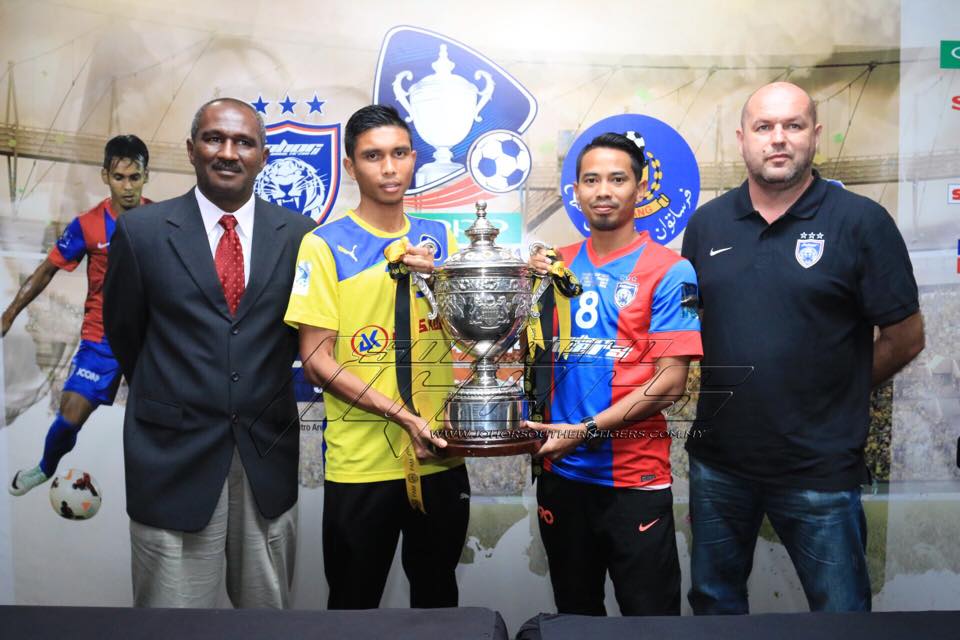 * Pahang very much in the game, says Zainal

* Pressure is on Pahang, says Hodak

PRIDE, passion and hunger for success are among the ingredients that will be seen at the National Stadium in Bukit Jalil tonight when FA Cup champions Pahang and Super League champions Johor Darul Takzim cross paths in this year’s Malaysia Cup final – the season ending finale that is the hottest topic for discussion in a country called Malaysia.

Football fever has gripped the nation and everyone seems to be having that ‘demam’ for good reasons. For once football is being discussed in every corner of the country – from kampungs, coffee shops, schools, offices, shopping complexes and even at homes.

“Who will win?” This is a soalan panas on every ones lips. Friendship takes a back seat if the friends are supporters of rival teams. There are Pahang and JDT supporters all over. Families are divided but all in good faith and sibling rivalry is at its best.

Tickets were sold out hours after being put on sale. Many bought tickets double price and willingly parted with RM80 to RM100 for a RM40 ringgit ticket. It did not matter to the fanatical supporters of the team. And many were also told to wear JDT colours or Pahang colours when they lined up at the stadiums when purchasing tickets for the final

Buses became a “hot commodity” because of high demand to ferry the supporters. There is this true story when someone in Johor Bahru tried to get buses from Mersing and was simply told in bahasa “abang lewat seminggu” (bro you are one week late) in making his booking.

He next tried to get buses from Kuala Lumpur and was promptly given a price triple the normal price.

Knowing the demand for chartered buses, Pahang supporters had booked buses from Mersing for the trip to Bukit Jalil and it did not matter if the price of a chartered bus had gone up because of the Malaysia Cup Final.

Super League champions Johor Darul Takzim are the pick of many but Pahang, the defending champions are also “on fire” and the Elephants are the choice of football pundits for various reasons.

The Southern Tigers have a squad that is strong enough to break up into two teams with equal depth and the suspension of skipper Aidil Zafuan Abdul Radzak and flanker Nazrin Nawi from the final has not “crippled” JDT in awayway.

Pahang coach Zainal Abidin Hassan is the first to admit this and in his own words said: “The suspensions have not weakened JDT in any way.”

A strong warning to his team that Pahang will have to show championship form to beat the Tigers if the Elephants want to retain the much sought after Malaysia Cup they won last year with a 1-0 win over Kelantan in the final. Pahang’s Argentine hitman Matias Conti delivered the winner with a header.

And Conti is once again Pahang’s hope to deliver. He plundered a hattrick in Pahang’s 5-0 whitewash of Kedah in the return-leg semifinal in Kuantan and powered the East Coast giants into the final 6-3 on aggregate. Kedah won the first-leg 3-1. Then there is Niegrain Dickson Nwakaema who is the “darling” of Pahang football with his high workrate and ability to take two or three opponents with ease.

JDT too have their aces in Luciano Figueroa and Jorge Pereyra Diaz and the Argentine duo have conjured winners and make goals to easy to come. They are Johor FA president Tunku Ismail Sultan Ibrahim’s prized possessions who have made JDT into a football powerhouse in Malaysia with an eye of going beyond the shores of Malaysia.

JDT coach Bojan Hodak is a seasoned hand in finals after his stints with Kelantan – treble winners in 2012 when the Red Warriors completed a unique triple by winning the League Cup, the FA Cup and the Malaysia Cup.

“It is a final where both teams want to win to end the season on a high…but the pressure is on Pahang because they are the defending champions. Of course we would like to add another trophy to our collection after winning the League Cup,” said the Croatian.