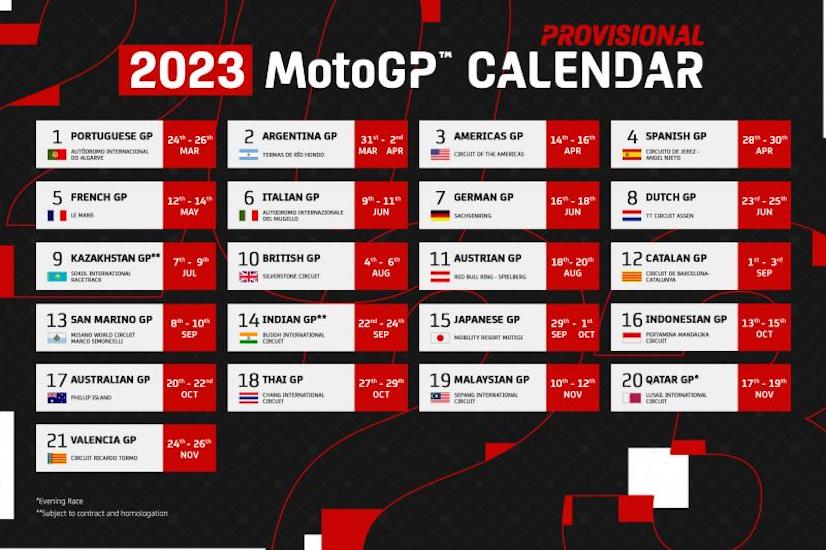 The wait is over and the 2023 provisional calendar can now be announced, with more races and more countries than ever before. Competition begins in Portugal at the stunning Autodromo Internacional do Algarve in March before the Championship heads to Termas de Rio Hondo and Austin, TX, for the Americas GP, kicking the season off in style.

From there, it’s back to Jerez as the European leg begins, with the classics coming thick and fast: Le Mans will host the 1000th Grand Prix before the paddock returns to Mugello, the Sachsenring and Assen.

Kazakhstan is set to debut in July ahead of a second break in the middle of the season, with the Central Asian country becoming the 30th country to host a motorcycle Grand Prix since 1949 – and Sokol International Racetrack the 74th venue to stage a premier class race.

VIEW FROM ABOVE: A lap of Sokol International Racetrack

From there the paddock returns west for the British and Austrian GPs, ahead of a new date for the Catalan GP at the Circuit de Barcelona-Catalunya as the event moves to September. The paddock then bids farewell to Europe in Misano ahead of another flyaway stint, beginning in another new country fresh for 2023: India.

Buddh International Circuit’s debut will make it the 75th venue at which the premier class have raced, and India becomes the 31st country to host a motorcycle Grand Prix. From there, the paddock heads further east to Japan and the classic Motegi before a weekend free to gear up for a triple-header.

India has seen its first ever Grand Prix added to the 2023 MotoGP™ calendar, and you can see what’s in store with a lap of the track!

The season ends with a thriller of a triple-header: from Malaysia the journey back west begins, with Qatar hosting the penultimate race of the season under the floodlights at Lusail as the venue welcomes the sport back to the Middle East. Then, to round out the season with its classic final fiesta of the year, the Circuit Ricardo Tormo brings the competition to a close back in Europe.

The full schedule for the 2023 MotoGP™ season

Check out where the paddock is visiting, and when, as next season’s calendar has been released!