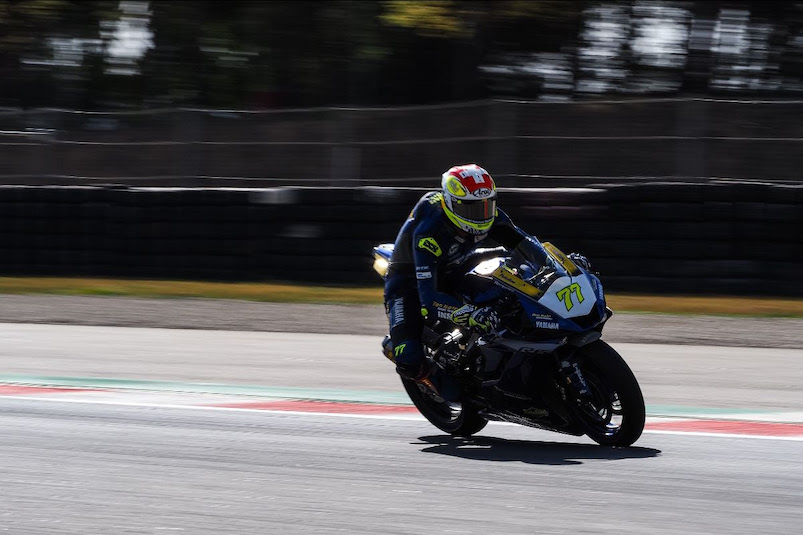 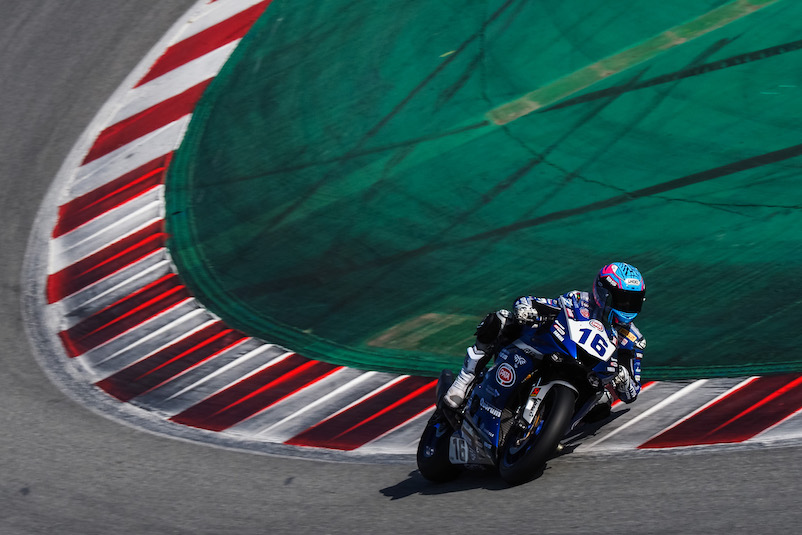 It was a tight affair throughout the two-day FIM Supersport World Championship Supported Test at the Circuit de Barcelona-Catalunya with rookie sensation Dominique Aegerter (Ten Kate Racing Yamaha) ending the second day at the top of the timesheets, taking over from Jules Cluzel (GMT94 Yamaha)

Aegerter posted a lap time of 1’44.220s with just a few minutes to go in the session to go quickest overall for the second day, fending off the challenge from Cluzel who had been top throughout the morning session and most of the afternoon session too.

Cluzel’s teammate, Federico Caricasulo, was fourth on the second day despite losing most of the afternoon session following a crash at the final corner of the circuit. Aegerter’s teammate, Galang Hendra Pratama, had a difficult day following a technical issue in the morning session and he finished the day down in 18th place.

2019 World Champion Randy Krummenacher (EAB Racing Team) was fighting for top spots on the timesheets as he adjusted to his new team for the 2021 campaign, posting a time that was around six tenths off Cluzel’s best for the day and third for the day, with Finnish rider Niki Tuuli (MV Agusta Corse Clienti) saving his best until last to go fifth overall for the day.

Tuuli’s late effort knocked rookie Luca Bernardi out of the top five with the Sammarinese rider in sixth despite a crash at Turn 3 in the afternoon session; the rider losing valuable track time but still putting in impressive performances in the test across both days as he prepares for his rookie campaign.

Raffaele De Rosa (Orelac Racing VerdNatura) finished in seventh for the day following a strong afternoon showing, putting in a lap time of 1’45.408s to finished in sixth in the afternoon session and seventh overall for the day, losing ground with Krummenacher leaping up to fourth. Teammate Leonardo Taccini finished in 20th place ahead of his WorldSSP Challenge campaign in 2021.

De Rosa’s former teammate, Federico Fulugni (VFT Racing), finished in eighth place after a strong test for the Italian rider at his new team; one of a handful of riders to be adjusting to new surroundings in 2021. His teammate, Davide Pizolli, was 15th for day two as he returns to WorldSSP for the first time since 2017.

Estonian rider Hannes Soomer was the lead Kallio Racing rider on Tuesday as he finished inside the top ten with new teammate Vertti Takala in 15th place; the pair looking to push on after Kallio Racing’s strong end to the 2020 campaign. Manuel Gonzalez (Yamaha ParkinGo Team) claimed a top ten finish on the final day of testing as his adjustment to new machinery continues.

It was another impressive day out on track for Swede Christoffer Bergman (Wojick Racing Team) with 11th, fending off the challenge from Marc Alcoba (Yamaha MS Racing) and Maria Herrera (Biblion Iberica Yamaha Motoxracing) in 12th and 13th respectively. On the other side of the MS Racing box, Pawel Szkopek crashed in sector two not long after the green flag was shown again after Caricasulo’s crash, bringing the session to a halt for a second time, with the Polish rider finishing last in the classification for the second day.

Luigi Montella (Chiodo Moto Racing) was the only rider who took part in both days to not improve their lap time on Tuesday, finishing the day down in 16th place, two tenths clear of the returning Michel Fabrizio (Motozoo Racing by Puccetti) who was 17th. Fabrizio’s teammate, Shogo Kawasaki, was one of three riders who only took part on Monday, with Steven Odendaal (Evan Bros. WorldSSP Yamaha Team) and Danny Webb (WRP Wepol Racing) missing out due to injury.