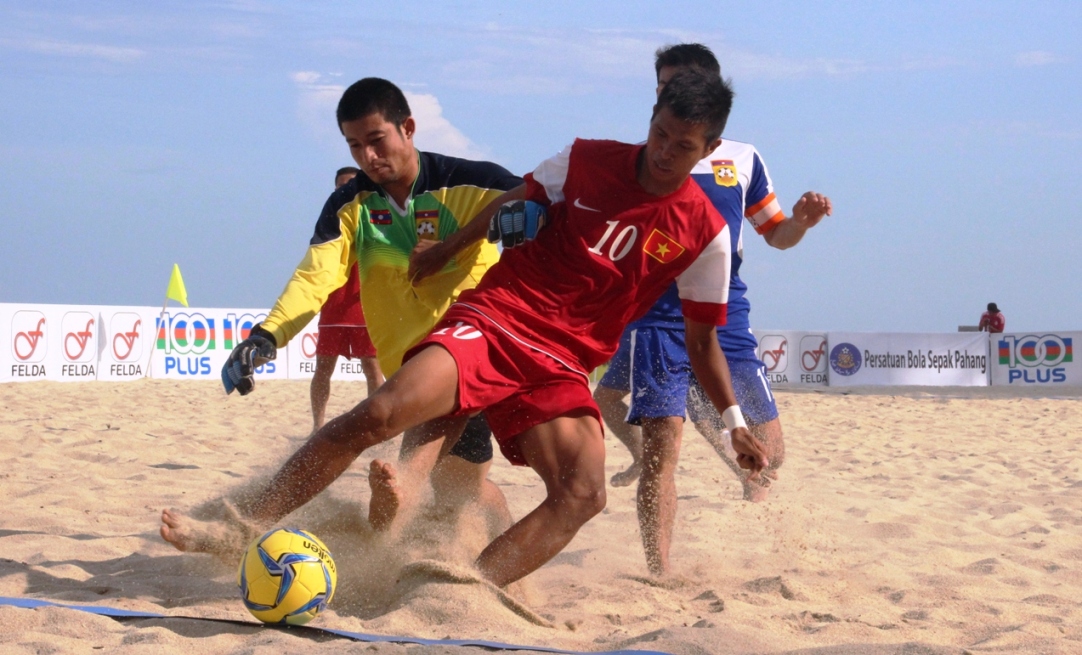 Hosts Malaysia will take on Vietnam in the final of the AFF-Felda Beach Soccer Championship in two days when they each overcame their opponents with identical 3-2 score lines in their respective semi-finals matches.

In the match that was played at the idyllic Teluk Chempedak beach here in Kuantan, the Malaysians were a lot more cautious in their match against favourites Thailand who had not dropped a single point en route to the final four. Both teams battled to a scoreless draw at the end of an exhilarating first period.

By contrast, the home team revealed apparent weaknesses when they were done in by Laos in the group stage. But this afternoon, despite trailing by a goal down in the second period when Tanandon Praracha struck in the 11th minute, the Malaysians fought back with the equaliser through Mohd Hasrol Ali in the fourth minute of the third period.

Thailand again went in front through Tanandon in the tenth minute as the Malaysians then pulled up off Khairul Azizi Nowawi in the last minute of the third period to push the game into extra-time.

And just when Thailand thought that the game will be decided through penalties, a freekick was converted into goal by Alias Halin in the final 33 seconds of the three minutes extra time when the ball took a bounce over Thai keeper Chukiat Chimwong.

“It was not an easy game by any means,” said Malaysian coach Wan Adremy Indera Wan Adnan, whose team will miss the service of Mohd Jamil Daud in the final after the latter was red carded late in the game.

“We had to be more patient against a very talented Thai side. We were lucky at times and that is what we need to produce again in the final.”

In the second semi-final, Laos paid the price of losing focus when they fell to a 3-2 loss at the hands of Vietnam. The Vietnamese struck in the early goal through Bui Tran Tuan Anh in the third minute to set the pace even though Laos replied off Thinnakone Vongsa in the 10th minute.

The Laotians who had set a perfect record in the group stage then went on to put their noses in front through Chiu Nonmany in the tenth minute as they grew in confidence as the match progresses.

But in the third period, some lackadaisical defending allowed Tuan Anh to complete his hat-trick with two more goals in the second and third minute as Laos became increasingly under pressure to grab the equaliser which never came.

“It was a difficult game,” said Vietnam coach Dang Quoc Hung. “The final against the hosts will be even harder.”