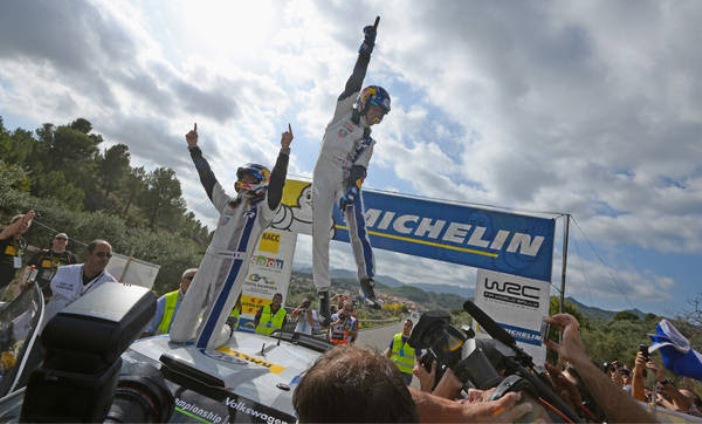 World champions*: Ogier/Ingrassia out of reach after seventh victory of the season

Eleven victories in one season: another record for Volkswagen in the WRC

Ogier ahead of Latvala and Mikkelsen: three Volkswagen drivers in front at the end of the season*

A big day for Sébastien Ogier and Julien Ingrassia. A big day for Volkswagen. With their victory at the Rally Spain, the old world champions have been crowned the new world champions*. After their seventh victory of the season, the 23rd of their career, the French duo cannot be caught in the overall standings of the FIA World Rally Championship. Not even by their team-mates Jari-Matti Latvala/Miikka Anttila (FIN/FIN), who with second place in Spain clinched the tenth one-two victory for Volkswagen in the WRC and staged a thrilling battle with their team-mates for the rally win. Going into the WRC finale at the Rally Great Britain, Ogier/Ingrassia have extended their lead over Latvala/Anttila to 31 points. Only 28 of those can be reduced in three weeks’ time. In the “mini final”, Andreas Mikkelsen/Ola Fløene also achieved an early result with seventh place in Spain – no one can push Andreas Mikkelsen out of third place in the drivers’ standings.

The crowning glory: Ogier/Ingrassia new kings of the rally world

World champions in the drivers’ and co-drivers’ standings for the second time in a row: Sébastien Ogier and Julien Ingrassia are only the fourth duo since 1977 to have successfully defended their title. This made the ninth time of popping champagne corks for Ogier and Ingrassia this season all the more special on the podium at the Rally Spain: Seven victories and two second places secured them the early title victory. In 2013 Ogier and Ingrassia won the titles in the drivers’ and co-drivers’ standings with Volkswagen. They are now the eighth duo to be added to the list of double world champions. Before them Walter Röhrl, Juha Kankkunen, Miki Biasion, Carlos Sainz, Tommi Mäkinen, Marcus Grönholm and Sébastien Loeb achieved more than one world championship title.

Icing on the cake: The battle of the season was the battle for the Rally Spain

Sébastien Ogier and Julien Ingrassia’s team-mates didn’t exactly make it easy for them to defend the title before the end of the season. Jari-Matti Latvala/Miikka Anttila kept up the pressure until the finish line. It was clear going into the Rally Spain: If Ogier finished before Latvala, the title would be decided. If it was the other way around, the concluding Rally Great Britain would be the grand finale. An appropriately thrilling duel developed right up until the final day. While Latvala/Anttila lost 36.6 seconds on gravel on Friday, on the following two days on asphalt they reduced this to 11.3 seconds bit by bit.

It’s all in the mix: Gravel and asphalt make for a unique challenge

138.54 kilometres on gravel, 234.42 on asphalt – the Rally Spain is a real challenge for drivers, co-drivers and teams alike. Besides needing a good feel for the gravel, total precision on asphalt is required – without any time for the drivers to adjust. Also typically Spanish: On the gravel stages on Friday the clouds of dust stirred up hung around in the windless conditions between the hills and limited visibility. On Saturday the special stage “Escaladei” that was driven twice was a focal point of the Rally Spain. In unusually warm temperatures, the 50-kilometre longest stage pushed the asphalt tyres to their limits.

Record for Volkswagen: eleven victories in one WRC season

Twelfth rally, eleventh victory – with the success at the Rally Spain, Volkswagen secured another top spot in the FIA World Rally Championship (WRC) rankings. Eleven victories in one season equals Citroën’s previous two best results (2005 – eleven out of 16 rallies; 2008 – eleven out of 15 rallies). One rally before the end of the season and Volkswagen has already achieved the highest winning ratio in WRC history. At least eleven out of a possible 13 victories means a rate of 84.61 percent – a solitary top score.

The mechanics’ performance at the Rally Spain was also record-breaking. On Friday evening they modified the Polo R WRCs from a gravel to asphalt set-up in less than 75 minutes. Exactly how much effort is required, a task usually completed in an hour, is illustrated by the number of individual components that were swapped. The mechanics swapped a total of 13 components that are made up of 1348 parts on each car – making a total of 4044 on all three Polo R WRC. The Rally Spain is the only rally on the WRC calendar that is held on both gravel and asphalt, and the service on Friday evening is the longest that is scheduled for the season.

14 of 17 special stages won, 20 additional top 3 times achieved – Volkswagen added more successes to their statistics at the Rally Spain. The number of special stage victories now stands at 327 out of a possible 463. With regard to top 3 times, the number increased to 751 out of a possible 1313 since first competing with the Polo R WRC at the Rally Monte Carlo in 2013. For Volkswagen it was the 21st rally victory in 25 WRC appearances and the 39th and 40th podium spots.

Bonus points are particularly appealing to the Volkswagen drivers. Bonus points, which are awarded to the top three for the drivers’ and co-drivers’ standings, have gone to drivers of a Polo R WRC 43 times on 24 power stages. At the Rally Spain, Jari-Matti Latvala/Miikka Anttila bagged the three points for the best time, one went to Andreas Mikkelsen/Ola Fløene.

Quotes from the day 03 at the Rally Spain

Sébastien Ogier, Volkswagen Polo R WRC #1
“It’s a fantastic feeling to become world champion for a second time! I’m over the moon, it was a real battle to defend the title. In particular, my team-mate Jari-Matti Latvala showed an incredibly strong performance in the last few months. Now Julien and I have a great sense of happiness and relief. Big thanks to our fantastic team at Volkswagen. Not just for giving us a fantastic car throughout the season. But also for the unique solidarity that we have. It doesn’t matter whether things are going well or badly – the team stands by every driver crew and that is extremely motivating. I’m happy and proud to be part of this team. Today we will have a big world championship party, that much is clear!”

Jari-Matti Latvala, Volkswagen Polo R WRC #2
“Congrats to Sébastien Ogier and Julien Ingrassia, they showed a strong performance here in Spain and deserve to be world champions. My co-driver Miikka and I tried to keep the fight for the title open for as long as possible. Unfortunately we lost too much time on gravel on Friday for us to be able to make up the deficit on asphalt. I was very happy with our performance on asphalt, but we still have some work to do on loose gravel. We’ll deal with that when we are next testing, but first the whole Volkswagen team will party hard this evening.”

Andreas Mikkelsen, Volkswagen Polo R WRC #9
“First I’d like to congratulate my team-mates Sébastien Ogier and Julien Ingrassia on winning the title. They prevailed despite Jari-Matti Latvala and Miikka Anttila not making it easy for them. Hats off to them for that performance too. With regard to my own rally, I intended to do more than finish seventh. However, I’m happy with the result. A flat tyre on Saturday cost me more than two minutes on Saturday. If that hadn’t happened I might have made it onto the podium. It was unlucky. Then all that was left was for me to fight Thierry Neuville for sixth place. In the end we lost that battle because we were too late starting the final stage and received a ten second time penalty. But at least we got a point in the power stage – for Ola, who is still fighting for third place in the co-drivers’ standings.”

Jost Capito, director of Volkswagen Motorsport
“A worthy winner of a fantastic battle throughout the season. Sébastien Ogier and Julien Ingrassia are deserved old and new World Rally Champions*. They withstood the pressure from Jari-Matti Latvala and Miikka Anttila perfectly, managed their advantage cleverly, and emerged victorious from this battle. That deserves the utmost respect. All three drivers showed an outstanding performance, unfortunately Andreas Mikkelsen and Ola Fløene were a bit unlucky on Saturday and lost more than two minutes through no fault of their own. With eleven victories in one season, Volkswagen has set a new record. That’s thanks to the whole team, on site, in Hannover and in Wolfsburg. All in all a great day for Séb, Julien and Volkswagen.”

… the most beautiful dents imaginable for chassis 21. In Spain this particular Polo R WRC was used for Sébastien Ogier and Julien Ingrassia for the sixth time this season. One of its highlights: the Rally Australia. The World Rally Car had a lot to put up with there – seven team members celebrating on its roof after Volkswagen secured the manufacturers’ title* in the WRC. Although the roof was fixed properly afterwards, you can still just about see the dents. Talking about today: New dents were added thanks to Sébastien Ogier/Julien Ingrassia’s second title.

And then there were also …

… 150 employees from the Volkswagen plant in Pamplona/Spain. The body in white for the Polo R WRC, on which the World Rally Cars are based, is made in Pamplona. Invited by Volkswagen Spain, the employees attended the twelfth race of the FIA World Rally Championship (WRC) season in their home country and saw their three Polo R WRCs in action.