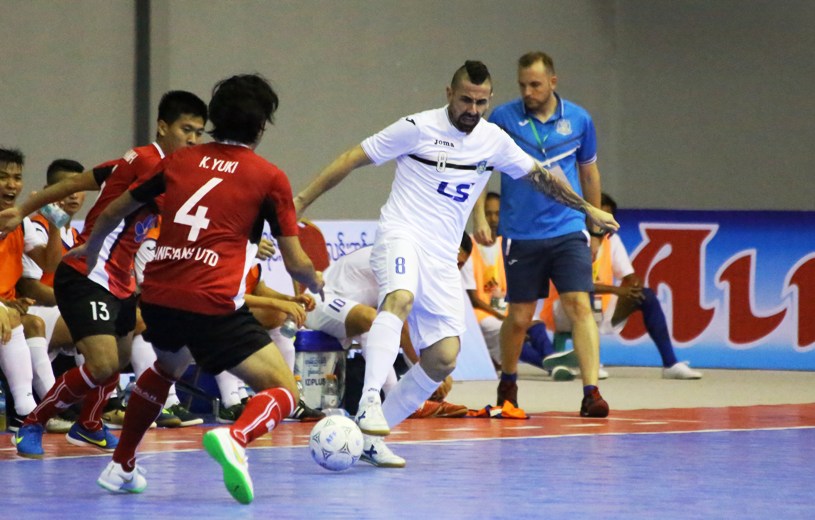 Thai Son Nam, powered by several national players, were full of firepower and they unleashed it on their hapless opponents. They broke down the Lanexang defence in the very first minute through Nguyen Bao Quan.

The Vietnam club continued to reel in the goals and at the break were comfortably leading 8-3. By the end of the game, they walked away with a 14-4 win to top the group.

Lanexang, who bravely battled their rivals to the end, did well to squeeze in goals through Nidnilanh  Chanchaleune in the fourth and 26th minutes and Chansamone Phommalivong in the 18th and 19th minutes.

In an earlier match, Myanmar Imperial College (MIC) FC and Indonesian club, Black Steel, shared points after an intense battle in front of a capacity crowd at the Wunna Theikdi Sports Complex Indoor Stadium on the opening day of the AFF Futsal Club Championship here today.

MIC FC, who were third in last year’s inaugural AFF club tournament, did not waste anytime and immediately attacked their opponents. They surged forward in waves and had a few good shots, but nothing that rattled Black Steel keeper Muhammad Iksan Rahadian.

Black Steel then grabbed the lead in the 17th minute through Panji. To the delight of the 3,000 fans, MIC FC quickly leveled the score through Aung Aung the next minute. The hosts tried to double the score but were let down by poor finishing.

MIC FC skipper Kyaw Soe Moe said the team defended well but could not finish off the chances they had to win. “We must work on our finishing for the next match,” said Soe Moe.

In the women’s category, Khon Kaen FC walked away with a crucial opening victory in an all-Thai battle against Bangkok FC today. Although they did not get a good start, Khon Kaen pushed hard and stormed away with a 4-1 win.

Bangkok FC missed a great chance to snatch the lead and in the process score the opening goal of the tournament. Bangkok FC were awarded a penalty early in the game, Pacharaporn Srimuang’s kick however was pushed out by keeper Pannipa Juijaroen.

The miss would prove costly for Bangkok FC who would eventually lose the game. Had they converted the penalty, the outcome could have been vastly different.

A few minutes later, Jenjira Bubpha smashed her shot against the right post, it was to be the first of many more strikes from Khon Kaen.

Khon Kaen’s efforts paid off handsomely when they blasted two goals within two minutes. Prapasporn Sriroj knocked the first in the 23rd minute with Vasinee Pakthongchai coming through with another in the 24th minute.

Prior to that, Vasinee netted the opening goal of the tournament in the 14th minute. Orapin Waenngoen added a fourth for Khon Kaen while Jenjira scored for Bangkok to put the final score at 4-1.