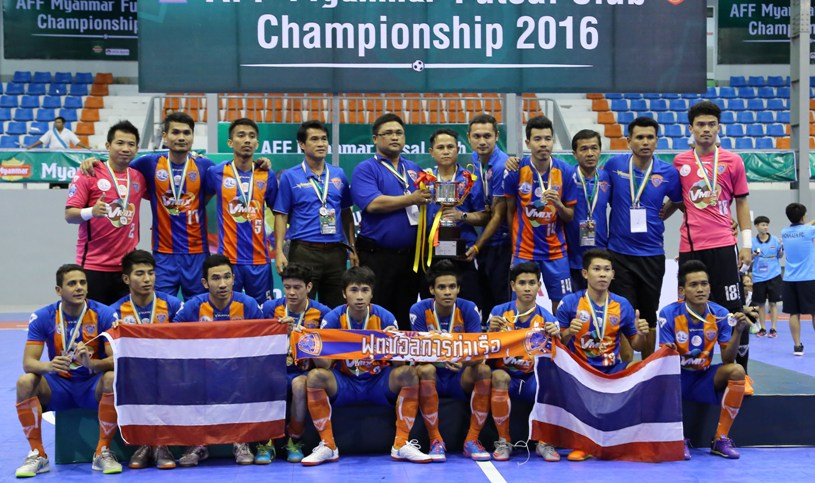 Thaiport were trailing by two goals after nine minutes and looked in danger of being dethroned. But the Thais soon composed themselves and took the fight to their rivals.

The skillful Thiago Mora de Olivera was the toast of the Thai team when he blasted a brace in the second half including one which was probably the best goal of the tournament.

“There are many good teams here and the competition has been tough. We wanted to win … it’s very difficult but now everything is ok. We are very happy to be champions again,” said Thaiport FC coach Thiago Olivera afterwards.

The first half was a thriller with both sides unleashing their all at each other. Both teams did not want to waste time and try and get the goals in as soon as they could.

Despite the two teams going flat out, the first goal only came in the ninth minute from Thai Son Nam. Nguyen Minh Tri raced through, turned and let loose a whicked grounder which caught the defence off.

Thai Son Nam added a second a minute later from a smashing half-volley from Yunusov Artur who perfefctly connected a corner kick which Olmo Campana Saul cooly flicked to his teammate.

A few minutes on, Thaiport got back at their rivals when Rattikun Plongghirun, who was lurking at the far post, easily turned in off a low cross from Marcos de Mendonica

Four minutes into the second half, Pornmongkol, off a corner kick, set-up Chaivat Jamgrajang who whipped in directly in. A minute later, off a similar corner kick, Olivera’s thundering volley rocked the crossbar and dropped into goal.

Olivera was soon celebrating again when he dashed down the right and blasted his shot into goal to gibe Thaiport a 4-2 lead. In the last few minutes Ngo Ngoc Son fired a sizzler which came off Lertchai Issarasuwipakorn and turned into goal.

In the men’s category third-fourth playoff, Myanmar Imperial College (MIC) FC laboured to a 7-5 come-from-behind victory to give hte home fans much to cheer for. With no representatives in the final, finishing third was a tremendous result for the hosts.

But the win did not come easy as Black Steel from Indonesia were just as intent on taking the bronze home. Black Steel, one of the more exciting teams here with their fast pace and nippy moves, snatched the lead after six minutes and made it 2-0 in the eighth minute.

MIC FC stormed back and levelled the score at 2-2. But a minute before the break, Jhon Gotlief Geisler Rumbruren blasted Black Steel ahead for a slender 3-2 lead.

The battle was furious as both sides gave their best in the last match of the tournament. After more goals on both sides, MIC eventually prevailed 6-5 to claim the bronze.