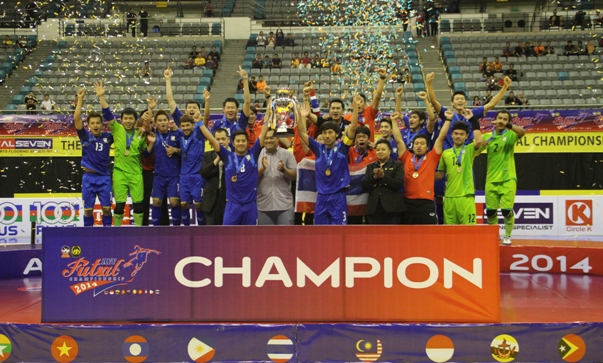 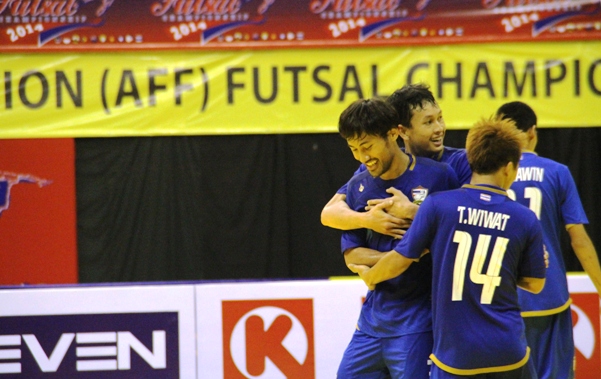 Thailand made it a perfect 10 when they wrested the AFF Futsal Championship here today for a record-breaking tenth time in the history of the tournament.  The Thais, despite not having several of their top stars that featured in the FIFA Futsal World Cup here, were simply too good and defeated Australia 6-0 in the final at the Malawati Stadium this evening.

In what was a repeat of last year’s final which featured the two same teams, Thailand took advantage of two quick goals in the first six minutes of the match to dictate the flow of the final. With Australia having to play catch up for the better part of the final, the Thais exploited the situation and launched quick counter-attacks to add on to their tally.

After a two-goal lead in the first half, with goals from Piyapan Ratana and Jetsada Chudech, in the fifth and sixth minute respectively, Thailand scored their remaining goals through Piyapan (23rd), Wanlop Ponsomsua (28th), Konghla Lakka (36th) and Sorasak Poonjangreed (40th).

“This is the first time that we have competed without the stars and these players showed a lot of promise,” said Thai coach Vic Hermans after the match. “It was a very good final but the more important factor is where do we go from here.

“There is a tournament in China in December and I think that we should particiapate in that one as part of the preparation for the AFC Futsal qualifiers next year.”

In the first half, Thailand shot ahead with two quick strikes in the first six minutes of the game which left the Aussies scrambling to get back into the game. Despite the lead, the Thais did not slow down and continued to pile on the pressure.

It was Thailand right from the start and after several minutes of trying, managed to break through to score the opener in the fifth minute, courtesy of a shot from Piyapan Ratana. The Aussies had hardly settled down when Jetsada Chudech increased the score a minute later. The goal marked Jetsada’s return to action after sitting out a one-match suspension.

For the record, the AFF Futsal Championship was held for the first time in 2001. Besides Thailand, the only other country that has won the tournament was Indonesia in 2010.

In the third-fourth placing play-off earlier today, Vietnam defeated Indonesia in a penalty shootout after both teams were tied at 2-2 at fulltime. In the ensuing shootout, Vietnam won 3-1 to finish third overall.