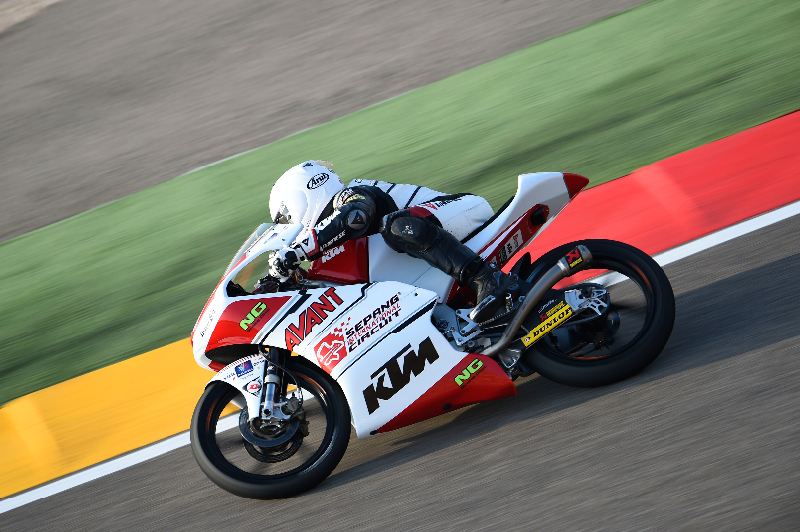 Hafiq Azmi will start the fourteenth round of the Moto3 World Championship tomorrow from row ten of the grid. The young Malaysian secured the 28th position after attaining his best time of the weekend on the penultimate lap of the qualifying session, clocking in at 2:00.329.

The final free practice of the weekend was not an easy one for the SIC-Ajo Team rider, as he found himself not entirely comfortable on the bike. Hafiq Azmi did not manage to lower his time from yesterday at the MotorLand Aragon circuit, and finished 29th fastest on the session with a lap of 2:01.143.

“It was a difficult day for me. I felt good on the bike, but I didn’t feel too confident on the track. Yesterday I could lap fairly consistently, but today was much more difficult for me. I’m still happy for the excellent work done by the team -they are helping me a lot. We started a little behind, but I hope to find a good race pace in the warm-up tomorrow and have clear ideas for the race. The start will be important to gain as many positions as possible” said Hafiq Azmi.

The qualifying session however saw the rookie improve on his best time which he realized during the FP2 session on Friday. Hafiq Azmi managed his best lap of the weekend on his penultimate fast lap attempt, just a few minutes before the end of the qualifying practice. His laptime of 2:00.329 puts him 28th on the grid for tomorrow’s race.

The third Moto3 World Championship round on Spanish soil will take place tomorrow at 11:00am local time, where a high chance of rain is forecasted.