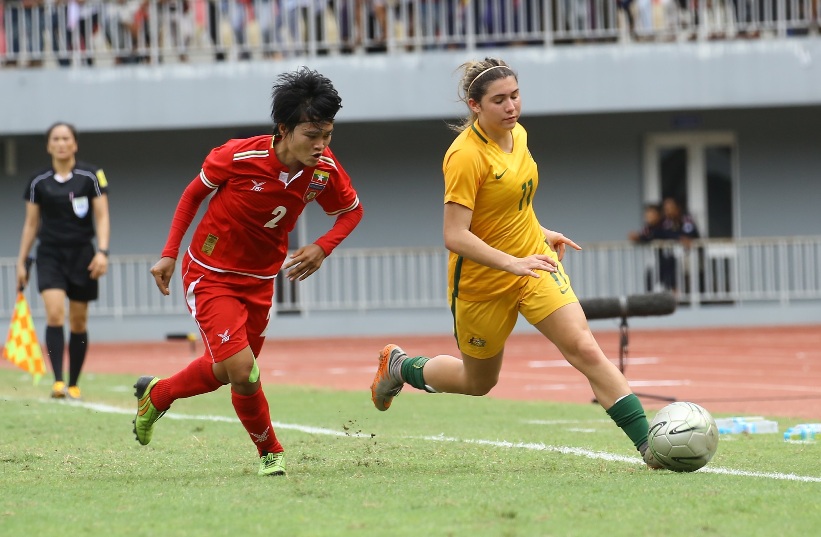 Despite so narrowly losing out on a place in the final, hosts Myanmar overcame the disappointment of missing out on a grand finish to defeat Australia Under-20 1-0 in the third-fourth placing playoff at the Mandalar Thiri Stadium this evening.

Win Theingi Tun was the star of the Myanmar side today. May Thu Kyaw crossed into a packed box and the ball bounced off another player before Theingu Tun headed in at the far post.

What was also surprising today was the fan turnout. While the turnout was nowhere close to the 31,000 that attended the semi-finals two days ago, a diehard bunch of over 1,500 Myanmar fans made sure the home team were decently supported.

Myanmar had the bigger share of the possession and had several solid chances to move ahead. But apart from the effort Theingi Tun, all the other attempts failed to find their intended mark.

The Aussies also had several attempts but failed to get their shots in. This was Myanmar’s first win against Australia here. In the earlier group match, both teams were tied at 1-1.  Myanmar in fact did not lose any matches in regulation time. They fell to Vietnam in the shootout.

Myanmar coach Roger Reuners said after the match that he was happy with the performance of his players.

“We had a few more chances to score today. I was happy with the way the girls played, I said at after the last game that their transition from defence to attack was important and they did this well today. Our defence was strong. We did not lose any matches here, so I’m happy.”