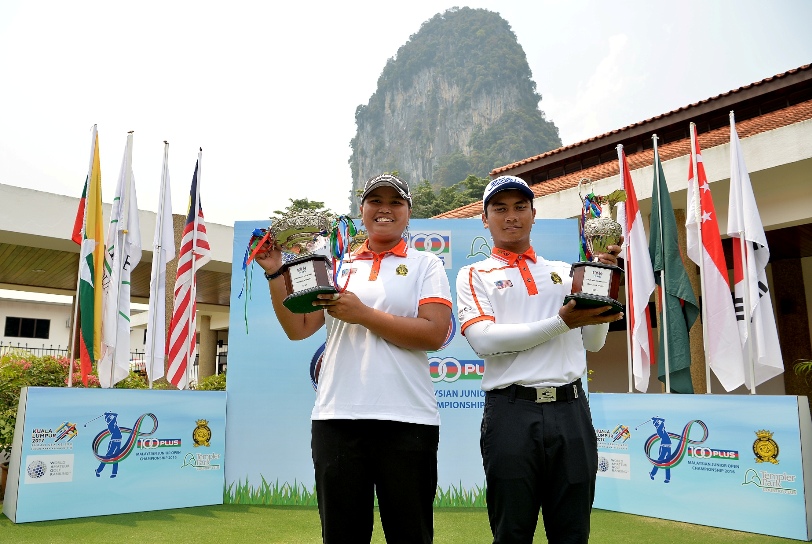 Muhammad Afif Muhd Fathi and Qistina Balqis Azhar stayed true to form to capture their first ever crown of the 100PLUS Malaysian Junior Open Gold 2016 here at the Templer Park Country Club.

But while Qistina Balqis were never in danger of losing the girl’s title following her consistency from day one, Muhammad Afif had to muster all that he could on the final day of the meet to fend off the challenge of fast improving Galven Kendall Green, who nailed a fabulous 67 on the final day.

Afif’s birdie at the 18th saw the MGA player returning a one-under 71 on the final day for a three day total of 210 as Galven came in second with 212 and Khavish Verman Varadan, also with 212.

“I was under a lot of pressure the whole day long especially from Galven. I was surprised that he managed to card a five-under but I was determined not to lose this,” said Muhammad Afif.

“It is good to win but this is just the beginning as I have a tournament in Taiwan next with Daeng (Abdul Rahman).”

Afif had started the morning on the right note with two birdies in the very first hole and the fourth. But then he began to wobble somewhat when he let slipped two consecutive bogeys at the eight and the ninth.

Going into the back nine, Afif could not control his game at the start with a bogey at the 13th before he recovered with two crucial birdies at the 14th and 18th.

On the other hand, Galven proved that he is not far behind his better-known sibling Gavin when he returned a 67 on the day to add to the 69 on the first and then a 70 on the second day of competition for a three-day total of 212 – just two strokes adrift of the winner.

In the meantime, Qistina Balqis proved that she was just too good this week when she recorded yet another one-under par 71 for a three-day total of 213.

While Qistina made some mistakes at the start with two bogeys at the first and then the fourth hole, she came back to hit three birdies on a trot at the 5th, 6th and 7th.

A bogey into the back nine saw Qistina returned with an eagle at the 12th for her final score. Her 213 after 54-holes was 12 strokes ahead of second-placed Nur Syazani Amalia Shahzan who finished the meet with 225.

“It is the biggest win yet in my career and winning this 100PLUS tournament will definitely put me in a better frame of mind for the next championship,” said Qistina Balqis.

With Nur Syazani finishing second, the third spot went to Zulaikah Nurziana Nasser who carded a 227.