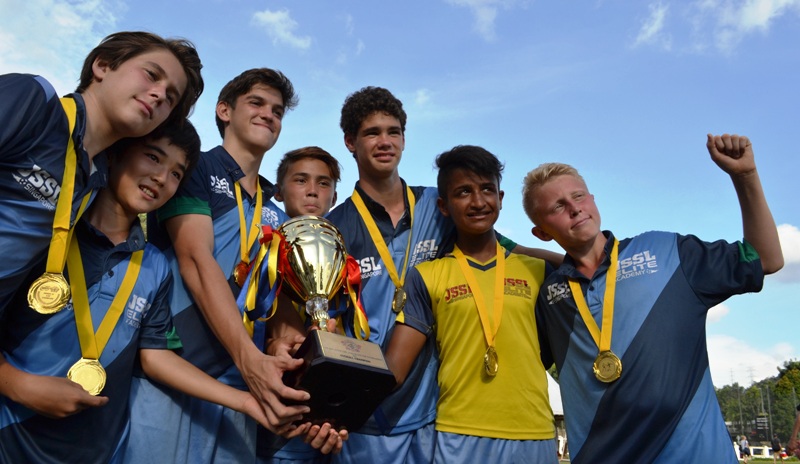 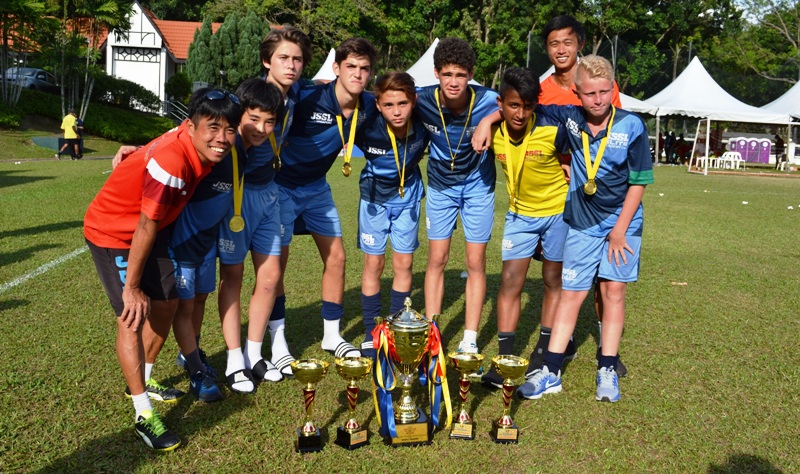 Junior Soccer School League (JSSL) Singapore almost made a clean sweep of victories in the 13th edition of the Dato’ Chu Ah Nge International football tournament this evening (Sunday) at the Royal Selangor Club Sports Annexe in Bukit Kiara, when they wrested four of five titles at stake.

JSSL wrested the Dato’ Chu Ah Nge challenge trophy as overall champions for their triumph in the Under-10, Under-12, Under-14 and Under-16 and runner-up in the Under-8 age group categories.

They have won the overall trophy for the third consecutive year.

The Dato’ Chu Ah Nge Challenge Trophy is presented to the team with the highest cumulative points at the end of the tournament, where teams collect points for their finishing in each age-group category.

JSSL’s only lost in one of the five finals they entered when their Under-8 team  JSSL FC 2 team lost in the final to ATB Tun Razak by a solitary goal in a sudden-death play-off, where it was 3 versus 3. Mohd Hadif Muhd Nur was the hero for ATB.

In the Under-10 category, JSSL FC 2 defeated Subang Jaya’s Titan United in sudden death playoff after fulltime ended in a scoreless draw. In the exciting final it was the effort of goalkeeper Krish Shah who made a solo effort from his goal to the opposite end to set it up for Alex Darby to slot home the winner.

Penang’s Assumption FC who were in two finals – Under-12 and Under-16 – had to settle for second spot when JSSL defeated them in both finals. JSSL 2 defeated Assumption from Penang by a solitary goal respectively in each category.

Host Royal Selangor Club (RSC) Harimau in their only final in the Under-14 category, were denied victory when JSSL 2 defeated them with two goals from Max Mc Coy.

However, RSC had some consolation when Miguel Wenzel bagged two individual awards – Best Player and Top Scorer (8 goals) in the Under-14 category.

“It was so close to complete a clean sweep but yet it slip away. We could hav set a rare record in the tournament. In any case, I think it is still a record having qualified for all five finals,” said Harvey Davis, the managing director of JSSL and head coach of the football school.

“We have also won the overall Dato’ Chu Challenge trophy for the third consecutive year and bagging ten individual awards is also a big achievement of sorts,” said Davis who has been bringing his teams for the last nine years.

“In the early years it was CIMB YFA who used to dominate this tournament, but over the years we have worked hard to rise.”

JSSL has 1,000 players in their academy and 250 player are elite players who train four times a week, while the rest train over the weekend.

Two players from JSSL, Ben Davis has graduated from the Dato Chu tournament to join the Fulham Under-18 team, while last year’s Most Valuable Player of the tournament, goalkeeper Felix Goddard, has joined Manchester City’s Under-14 team.

A total 80 teams comprising local teams and overseas teams from Indonesia, China, and Singapore and 1,000 players competed in this two-day fun-filled football carnival for honours in the Under-8, Under-10, Under-12, Under-14 and Under-16, categories.

Several ex-internationals were present yesterday to lend support and motivate the young players and among them were Datuk N. Thanabalan, Datuk Santokh Singh and Teo Yit Huat.

Earlier in the afternoon RSC hosted children from the Damai Chempaka Children’s Home for lunch and presented the sports shoes as part of the club’s Corporate Social Responsibility.