Home International American Paez clings on to lead at Aboitiz 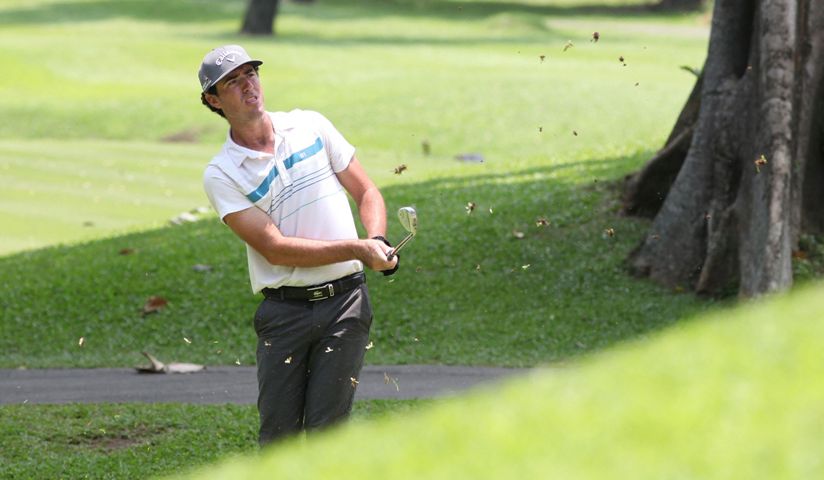 American Nicolas Paez inched closer to his maiden Asian Development Tour (ADT) title after battling to a two-over-par 74 to maintain his one-shot lead in the penultimate round of the Aboitiz Invitational on Friday.

Paez traded three birdies against five bogeys to remain in control with a three-day total of five-under-par 211 at the US$100,000 ADT event while 2012 ADT Order of Merit champion and former winner Jay Bayron of the Philippines lurks in second place following a similar 74.

Olympic-bound Gavin Green of Malaysia signed for the day’s best score of 68 to sit four shots off the pace in third alongside American Blake Snyder, Sweden’s Malcolm Kokocinski and local veteran Antonio Lascuna at the Wack Wack Golf and Country Club’s East course.

Paez got off to a fumbling start with a bogey-birdie-bogey from the second hole and dropped three more shots in the next eight holes before fighting back with two birdies on his way home.

“I wasn’t hitting it too well. I had some trouble with the green speed today but I managed to stay in it and not try to change anything. My driver was giving me problems in the middle of the round and it’s normally the strength of my game. I held on tough in there and managed to gain two birdies in my last six holes,” said Paez, who turned professional in 2013.

“I finished fairly strong so I feel good heading into the final round tomorrow. I was just trying to stick to my game plan out there and didn’t want to think about being in the lead. I just try to keep it simple and play the best golf I can,” added the 27-year-old Californian.

Bayron, a three-time winner on the ADT but not since 2012, stayed in the thick of things after battling tooth and nail alongside playing partner Paez.

“I couldn’t find my rhythm today. My driver and irons were not as good today too. My highlight was on the second hole. I hit a poor tee shot but recovered well with my second shot and managed to save par when I holed my putt from inside eight-feet. I still believe I have a very good chance of winning tomorrow,” said the 37-year-old Filipino.

Green, who will be representing his nation in the Olympic Games next week, looked poised for another good showing in Manila, where he had earlier claimed his career’s third ADT title in April.

“This is the best round I’ve played so far this week. It’s my first time here at Wack Wack and I actually haven’t touch my clubs for 10 days before coming here so I am happy to put myself in contention. It’s also good to get back my groove a little bit before heading to Rio for the Olympics next week,” said the 22-year-old Malaysian, who fired six birdies against two bogeys.

A victory this week will earn him playing rights on the premier Asian Tour for the remainder of 2016.

“It’s a tough course. I don’t think I have much advantage on this course being a long-hitter but I managed to keep it in play. I am still able to hit drivers on the par-fives here which is nice. I just managed to make some putts today and I hit about 15 greens. I will stick to my game plan tomorrow. Things can get out of hand quick especially when the wind picks up here,” Gavin added.