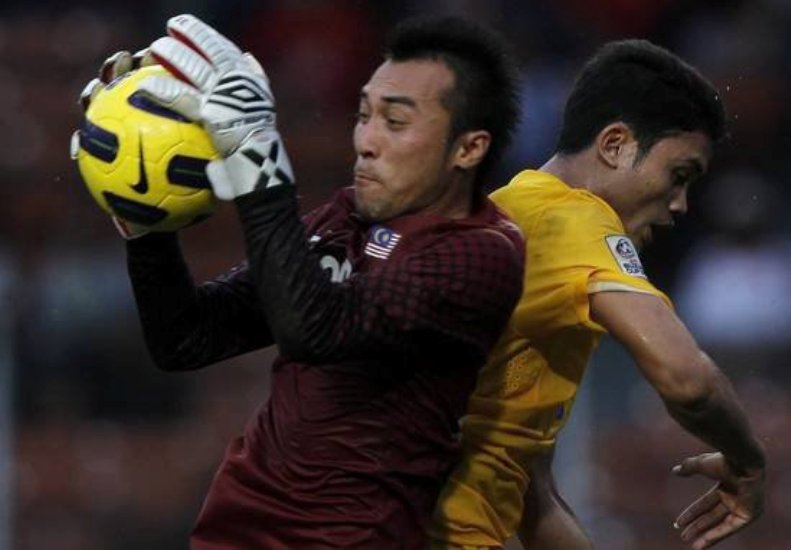 * Malaysia embark on a journey of hope

KELANTAN’S Khairul Fahmi Che Mat is still the national number one goalkeeper in the country and will keep goal for Malaysia in their opening match in Group B in the AFF Suzuku Cup 2014 tournament at the Jalan Besar Stadium in Singapore on Sunday.

The seasoned hand in the national team and Malaysia’s hero in 2010 when Malaysia won their first ever Suzuki Cup under coach Datuk K. Rajagobal  has been given the nod over former Selangor custodian Farizal Marlias and third choice Khairul Azhan of Pahang who won a grand double as the Best Goalkeeper and Most Valuable Player in this year’s 100PLUS-Astro-FAM national football awards.

“Fahmi is the first choice and he will keep goal when we play Myanmar in our opening match,” said national chief coach Dollah Salleh who has been battling injuries and Malaysia below par performances in friendly matches – defeats that many feel are signs of disaster for Malaysia.

“He (Fahmi) is experienced and right now is the obvious choice based on his performance, both, in training and friendly matches. Fahmi is a vital cog in the team and as the last line of defence he holds the edge over the Farizal and Khairul Azhan.”

Malaysia are drawn in Group B with defending champions Singapore, three-time winners Thailand and qualifier Myanmar. Group B matches will be played in Singapore. Vietnam, the 2008 winners are in Group A together with Indonesia, Philippines and qualifier Laos and will host the group matches in Hanoi.

Malaysia’s journey began on Friday afternoon when the team left for Singapore with national chief coach Dollah Salleh stamping voice of confidence as critics continue to lambast his choice of players and even his support staff.

However, the former international has taken all into his stride and reiterated that “Malaysia’s chances are as good as any others” in the much awaited biennial championships which is often dubbed the “The Asean World Cup”.

Malaysia have won the Suzuki Cup once and Dollah believes there are no reasons why the nation cannot make the semi-finals from the group. For the former international what counts is what happens in a tournament proper and not results of friendly matches, especially when he was still identifying the team – not forgetting that time was against him.

The FA of Malaysia must take a big share of the blame for this. If only the national football body has taken immediate steps to fill vacuum after Rajagobal’s contract was not renewed. And as usual it was another merry go round when the domestic league still ‘SUFFERS” from the perennial disease of postponements and changes at the whims and fancies of the competition committee.

Let us throw our wholehearted support behind Dollah Salleh and the team. Many may say the writing is on the wall for the team’s failure but in Dollah’s own words “it is not impossible” to achieve success in the Lions den.

After Myanmar, Malaysia face Thailand on Nov 26 and Singapore on Nov 29. The match against the Thais will be played the at Jalan Besar Stadium and against Singapore at the new National Stadium in Kallang.