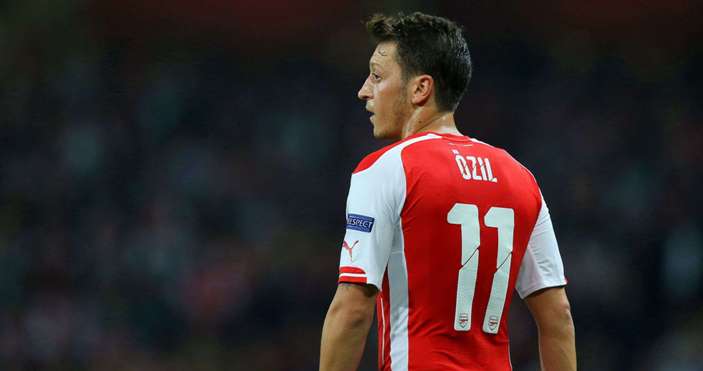 Mesut Ozil has delivered a damning assessment of Arsenal’s season by admitting Arsene Wenger’s side have “screwed up” in their Premier League title challenge.

Wenger’s team go into their game with Watford at the Emirates Stadium on Saturday 11 points adrift of Leicester with a game in hand on the leaders.

The chances of them closing that gap, and overhauling second placed Tottenham as well, are slim, adding to Arsenal’s sense of regret after being regarded as favourites to be champions for long periods in the campaign.

Ozil believes the Gunners are not out of the title race, but his claim the club should have challenged more strongly reflects the views of many of the club’s supporters, some of whom have voiced their frustration at Wenger’s management in recent weeks.

“Looking at our season so far, we have to be honest and admit that we screwed up ourselves,” Ozil said.

“We did not play to our potential in the games against the so-called smaller teams. You immediately get punished for that in the Premier League.

“But we still have a chance of winning the title. We have to hope Leicester and Tottenham slip up and then make the most of it.”

Ozil also admits he would like to pull off an unlikely triumph to reward his manager.

“I would be delighted for Wenger if we win the title. He played a major role in my decision to join Arsenal. He was desperate to sign me,” he added.

“Everybody knows he is an extraordinary manager. He is always hungry for success, has a lot of experience and always takes his time for the players. He helps players develop.”

Arsenal’s victory at Everton immediately before the international break was only their second success in nine games in all competitions and they will have to produce a dramatic upturn in form if they are to increase the pressure on the top two.

Jack Wilshere and Tomas Rosicky have returned to full training but neither midfielder will be available to face Watford.

Gunners goalkeeper Petr Cech has an outside chance of returning but Aaron Ramsey and Mathieu Flamini will definitely miss out, although Wenger is hopeful the pair will return next weekend.

Quique Sanchez Flores believes his Watford side will have to contend with a fired up Arsenal side hell-bent on revenge.

Flores’ team inflicted a shock when they dumped holders Arsenal out of the FA Cup at the quarter final stage last month.

The 2-1 win at the Emirates came as a surprise given Watford’s poor league form after winning just twice this year.

“This is a completely different competition, scenario and match. But they will want revenge,” Flores said.

“We will find a very good team and players and we will need to be at our best to win.

“It’s a harder game now than we faced in the FA Cup. We are expecting a tough opponent and match.”

Mid-table Watford are all but safe but are in danger of allowing their Premier League season drift to a close.

Flores insists he won’t let his side go through the motions in the run-in and focus solely on their Wembley semi-final date with Crystal Palace.

“We need to recuperate our energy that we usually play in during matches,” he said. “We have to forget what happens in the future with the FA Cup.

“The league is our objective and it’s dangerous to focus on one match to play in three weeks.” – Agence France-Presse