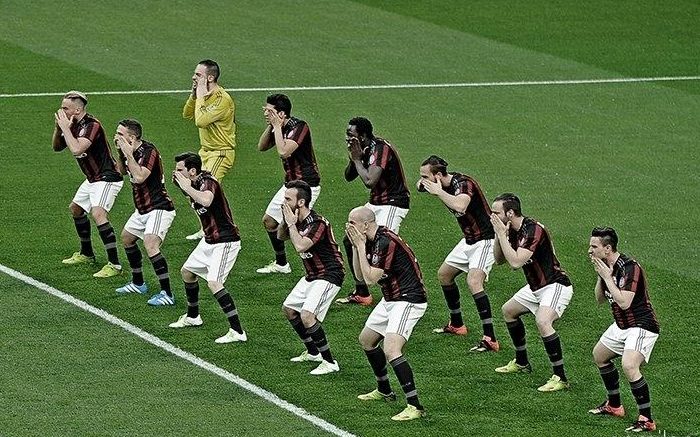 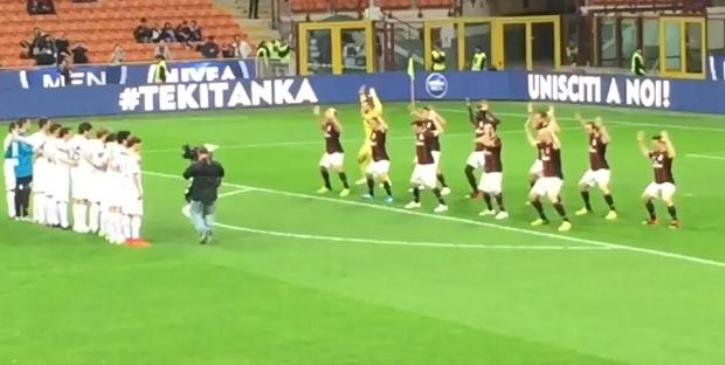 Struggling Serie A giants AC Milan were left red-faced amid a social media backlash that mocked the club for a bizarre pre-match ‘Haka’ ritual dance prior to a Serie A game on Thursday.

Seven-time European champions Milan hosted relegation-haunted Carpi at the legendary San Siro stadium looking for a win to boost their bid to qualify for next season’s Europa League.

But fans were left baffled in the lead-up to kick-off when two ‘teams’ of players — dressed to look like AC Milan and Carpi — appeared on the pitch.

After both teams ran down the end of the pitch, the ‘Milan’ team proceeded to perform a Haka — the ritual war dance usually performed by New Zealand’s All Blacks prior to their rugby games.

With electronic advertisement hoardings blazing the message: ‘Men, this is your ritual’, it quickly became apparent the ‘players’ were actors and the dance all part of a publicity campaign for a well-known men’s face cream.

Several of Milan’s players currently appear in television adverts for Nivea cream, although Thursday’s display did little to smoothe the concerns of fans amid yet another disastrous season for the club.

Indeed, Milan fans around the world voiced their digust at the depths to which Milan, and football, has plummeted. Owner Silvio Berlusconi is actively seeking a buyer for either a majority or minority share in the club.

In a series of posts on the micro-blogging site Twitter fans unleashed their fury.

Another, @88NTaylor said: “AC Milan doing the Haka last night man. Jesus wept ???? I am cringing now can’t imagine how bad it must have been in the stadium.”

Milan’s failure to beat a team currently struggling to stay in Italy’s top flight was the bottom of the barrel for disgruntled fans of a team that will miss the Champions League for the third year in succession. – Agence France-Presse