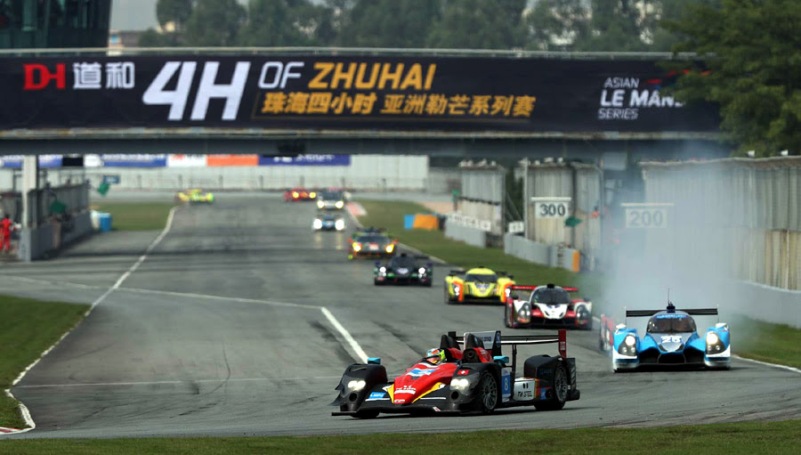 In general the start of of the Asian Le Mans Series 2016/17 at Zhuhai/China was a real success, providing full grandstands, a lot of interest of the numerous local fans and a full grid of 28 cars clearly showed the rise of this winter championship since last season.

But for Swiss Team Race Performance Team it was anything else but a pleasant and successful start: A lot of bad luck caused last year´s title winner having to return home without any points in spite of a really good performance of team and drivers.

Already during the first free practice the team suffered from an engine failure, even as the Race Performance Oreca LMP2 had been fitted with a brand new Judd engine. With the new power unit things turned to the better when Stuart Moore and Giorgio Maggi looked promising during the other free practices as well as qualifying.

The Race Performance LMP2 was the fastest LMP2 car on track for most of the weekend, even if the result in qualifying on Saterday only happened to be P3.  „The rain for sure did not help us at all there”, Maggi stated. “For sure in the dry we would have been able to do much better.”

During the first hour of the four-hour-race the team always kept P1 or P2, until bad luck hit for the first time, coming from the Algarve Pro Racing Ligier JSP2 Judd number 24, who hit the Race Performance Oreca with a much-too-aggressive move from behind and took it off track – receiving a drive-through-penalty for the action soon after.  But double damage was already done: First it took a few laps to  repair the car in the pits which took away all chances for victory from Maggi and Moore,  second the cost of the damaged parts for the team will be around 20 000 Euro.

Nevertheless the two Race Performance drivers re-took the race and managed to improve to P8 in the general classification and to R4 in the LMP2 category with only very short time to go. But during the last lap the left front disc exploded and sent Stuart Moore into the gravel bed, where he got stuck – a very sad end to his first race for the team.

Actually not much damage was done to the car, but as in most other long distance race categories the ALMS rules say that a car has to cross the finish line to be classified. Which meant no classification and therefore no points at all for Race Performance in the race that was won by the Jackie Chan Racing Oreca 03R Nissan driven by WEC experienced Gustavo Menezes and Ho-Pin Tung…   Very disappointing of course for Moore, who otherwise made a successful debut in the fast Oreca03 Judd number eight.

“Corner speeds are really high, but the LMP2 is a fantastic race car I felt immediately comfortable with”, said the 20-year-old. “It´s really a pity, we would have been able to fight for victory here in Zhuhai, but I am already looking forward to the next race in Japan.“

Of course team principal Urs Meier war heavily disappointed as well: “For most of the weekend we were the fastest car on track, also during the race. We had already managed to get a decent lead when we were hit by the number 24 Ligier. They got a penalty for that, but that did not really help us at all as due to the long time it took to repair the car we had already lost a chances for a podium finish. Now we will be focussing at the next race from 2nd to 4th of December at Fuji/Japan.