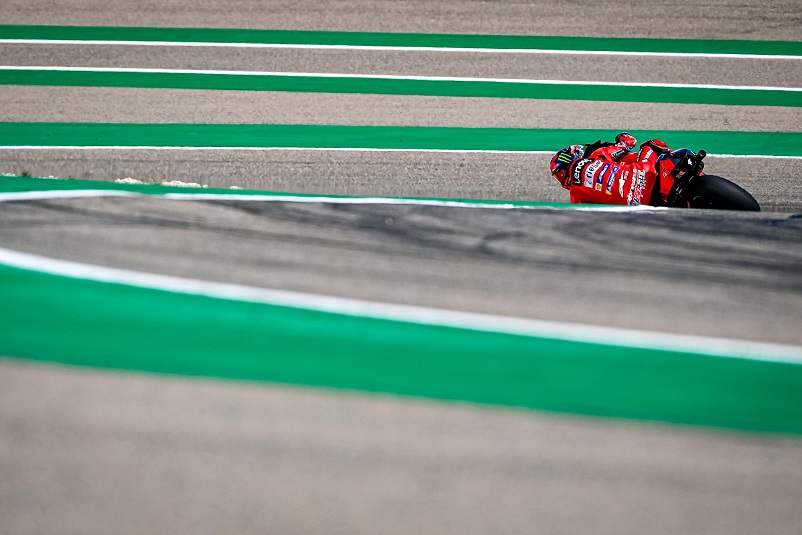 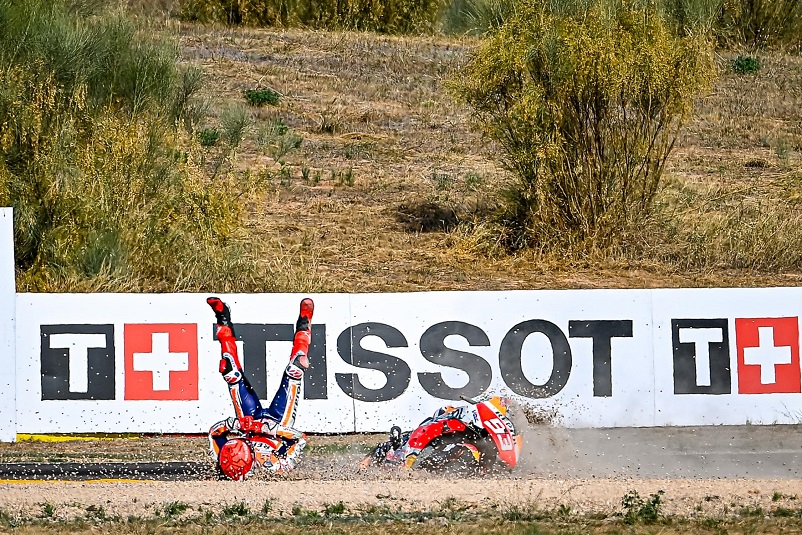 For the first time since the 2018 Aragon GP, there will be two factory Ducatis leading the pack off the line after Francesco Bagnaia (Ducati Lenovo Team) set a blistering new all-time MotorLand lap record to beat teammate Jack Miller to pole position at the Gran Premio TISSOT de Aragon.

A barnstorming Q1 unearths a shock

After a scintillating Saturday morning session that saw the top 14 split by just 0.4s, there were some big hitters competing in Q1. Third in the Championship Johann Zarco (Pramac Racing) was the early pacesetter thanks to his 1:47.327, with Brad Binder (Red Bull KTM Factory Racing) occupying second ahead of the second set of flying laps. Alex Rins (Team Suzuki Ecstar), 2020 MotorLand race winner, needed to find time if the Spaniard was to progress into Q2.

It was a manic end to Q2 with every rider improving, but the top two remained the same. Zarco and Binder flew through into the pole position shootout, with Rins having a disastrous session. It was P10 for the Suzuki star, which means a P20 grid slot for Sunday’s race.

Reigning Moto2™ World Champion Enea Bastianini (Avintia Esponsorama) – in his debut MotoGP™ Q2 session – set the first real benchmark of the session but two of his Ducati colleagues soon went P1 and P2. Ducati Lenovo Team’s Bagnaia and Miller were sitting pretty at the summit before Marc Marquez then placed himself in a Bologna bullet sandwich, but the number 93 was 0.2s off Bagnaia. Then, rookie sensation Jorge Martin put his Pramac Racing Ducati on top with a 1:46.878, before Quartararo did something we see very often: P1 in Q2.

The Frenchman’s time was a 1:46.727 – a whisker away from the all-time lap record – and as the riders peeled into pitlane before heading back out for a final pole position attack, it was Quartararo leading a trio of Ducatis in the form of Martin, Bagnaia and Miller, with Marc Marquez and Joan Mir (Team Suzuki Ecstar) P5 and P6 with four minutes to go.

Pecco came out swinging on his second run and thumped in a new lap record. A 1:46.322 was now the time to beat, Bagnaia’s incredible lap was 0.405s faster than Quartararo’s. And on the latter’s first attempt to beat Bagnaia, a mistake was made at Turn 12. Meanwhile, Bastianini shoved his Ducati into P6 to demote Mir to P7.

Mir then returned the favour on his last lap to grab P6 though, and just behind the number 36, Marc Marquez climbed to P3. Quartararo got round to get another lap under his belt and through the first two sectors, he was up. However, El Diablo lost time in the latter half of the lap but still managed to improve and go P2 – but not for long. Just behind Quartararo on the road was Miller and the Aussie leapfrogged Quartararo to make it a factory Ducati 1-2, which saw Marc Marquez shoved down to P4.

Marc Marquez missed out on a front row start by just 0.017s, but a P4 start for the FP4 pacesetter is a good result. Martin didn’t improve on his first run time and slipped to P5 at the end of the session, nevertheless another superb effort for the rookie on home soil, as Aleix Espargaro (Aprilia Racing Team Gresini) leaves it late to grab P6.

That Espargaro lap saw Mir slip to P7, certainly not a disaster for the 2020 World Champion who looks good in race trim once more. Pol Espargaro (Repsol Honda Team) couldn’t replicate his Silverstone Saturday heroics, it’s P8 for the Spaniard ahead of Bastianini – who claims his best MotoGP™ qualifying result in P9 – and Zarco. Takaaki Nakagami (LCR Honda Idemitsu) claimed P11 ahead of Binder, the latter didn’t have a fresh soft tyre to use in Q2.

So, Pecco blows the competition out of the water in Q2, but FP4 showed that there’s a few contenders for Aragon’s 2021 crown. Can Ducati take victory on a track they struggled at tremendously last season, will Quartararo rise highest once more or can Marc Marquez return to the top on a happy hunting ground? Find out at 14:00 local time (GMT+2) on Sunday afternoon. 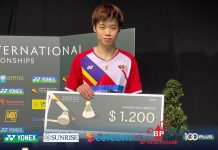