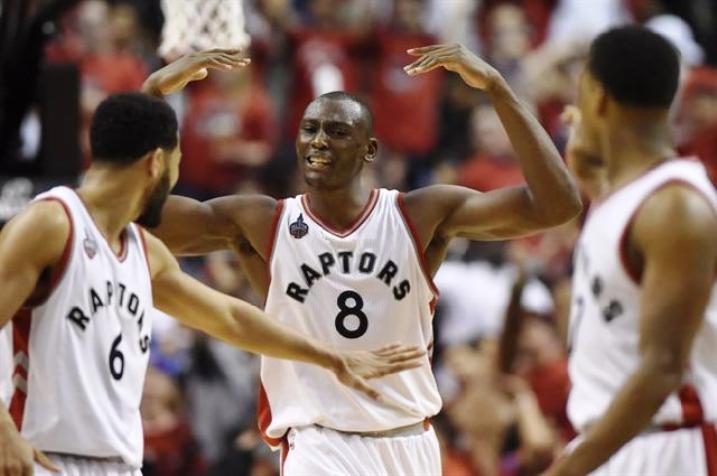 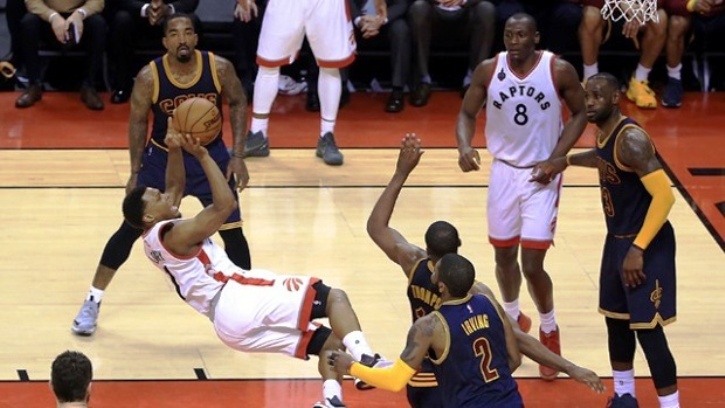 Cleveland’s 10-game playoff win streak was snapped one shy of the NBA record but the Cavaliers still lead the best-of-seven Eastern Conference finals 2-1 with game four Monday at Toronto.

A Raptors team that was humbled twice at Cleveland sent a message that they were not going to be swept out like the Cavs’ prior foes.

“It says a lot about our guys’ character and resiliency,” Raptors coach Dwane Casey said.

“It was aggression. It was a must win for us. We needed it,” DeRozan said. “When we play like this, good things happen.”

The series survivor will face either defending champion Golden State or Oklahoma City in next month’s NBA Finals.

Democratic Republic of Congo 2.06m centre Biyombo matched Dwight Howard and Hakeem Olajuwon for the most rebounds in an NBA playoff game since 1984.

“It was amazing, 26 rebounds, protecting the rim — he was big time. Without him we probably wouldn’t get this win,” DeRozan said.

“Bismack did a great job grabbing rebounds and keeping them off the boards. He was a monster. He kept us going. He gave us a chance to get out in transition.”

Biyombo also added seven points and four blocked shots, igniting roars from the Canadian crowd as he wagged his finger in the style of retired NBA star Dikembe Mutombo after batting aside Cleveland shots.

“He gives us that confidence and energy and rim protection,” Toronto’s Kyle Lowry said. “He gets the crowd into it. We feed off that energy. There’s no substitute.”

The Cavaliers made only 28-of-79 from the floor, a woeful 35.4 percent, and hit only 14-of-41 3-point attempts while being outrebounded 54-40 — much of those troubles stemming from Biyombo’s big night.

“Biyombo gave them a big lift. He came out and played well,” Cavaliers coach Tyronn Lue said. “He did a great job of protecting the paint, making some great rebounds and blocking shots. He just had a great game.”

“They played an exceptional game,” James said. “We didn’t play our game and they made us pay for it.

“We’ve got to go back to the drawing board, not fix everything but a few things, and play better on Monday.”

Cleveland’s Tristan Thompson was humbled by Biyombo inside but Lue was not pointing fingers.

“When you shoot 35 percent there’s a lot of rebounds available and he’s the biggest guy on the floor,” Lue said.

“They were kicking our butts so he should have the right to wave his finger — until we do something about it.”

Biyombo scored six consecutive points after Cleveland pulled within 85-77 in the fourth quarter to doom any comeback ideas.

Lowry scored 20 points and Cory Joseph came off the bench to contribute 14 as well as tough defense on Cleveland guard Kyrie Irving, who with forward Kevin Love was crucial in carrying the load in Cleveland’s two wins.

“Sometimes it’s good to get kicked in the teeth,” Love said.

Toronto led 27-24 after the first quarter and a 22-7 Raptors run late in the second quarter produced a 60-42 edge before the Cavaliers trimmed their half-time deficit to 60-47.

“To start the game we weren’t as physical as we should have been, understanding they were going to play with a lot of speed, a lot of force,” James said.

The Cavaliers pulled within 70-65 late in the third period, but the Raptors extended their margin to 80-70 entering the fourth quarter on a 3-point buzzer beater by Joseph and stayed in command to the end.

“They just outplayed us,” Lue said. “They came out with their back against the wall and they fed off the energy of the crowd.