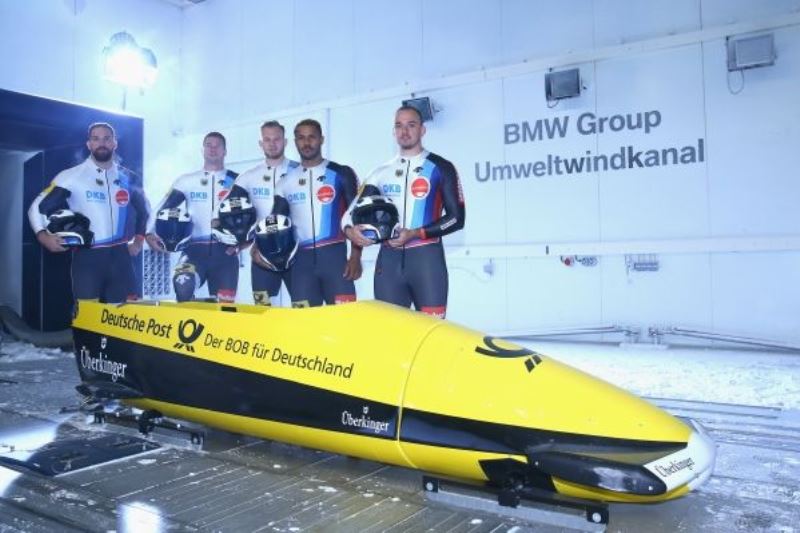 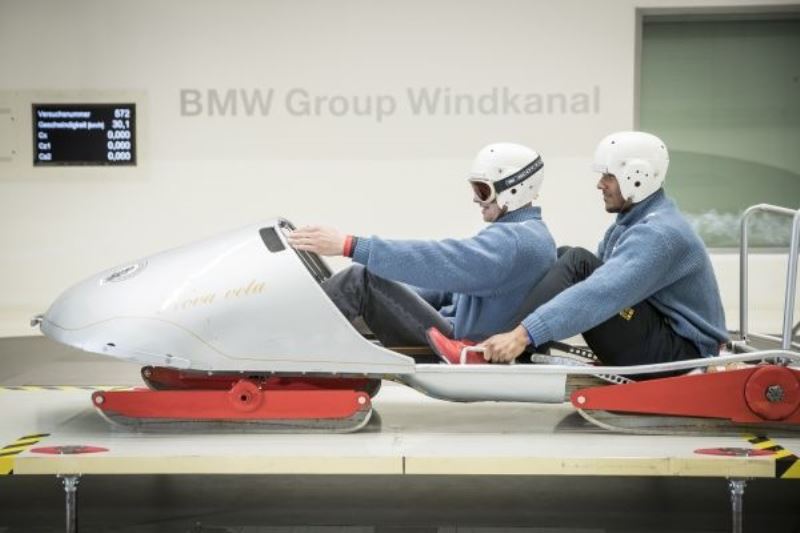 Chasing the crucial hundredth of a second in the ice channel, the BMW technology transfer from car manufacturing made a valuable contribution

The German Bobsleigh and Sled Sports Federation (BSD) athletes have a score to settle at the Olympic Games in Pyeongchang (KOR) in February 2018. Four years ago, the successful bob athletes came away without a medal.

At the three world championships that followed, Germany returned to winning ways and appears to be ready for the Olympics. BSD technology partner BMW was also involved in the development of the sporting equipment. A whole host of BMW engineering expertise is incorporated into the sleds: aerodynamics, ergonomics and structural analysis.

As the long-standing premium and technology partner of the BSD, BMW supports the association with the development and optimisation of the sleds. BMW brings its extensive expertise from car manufacturing, as well as its unique infrastructure. In the BMW Group’s aerodynamic test centre and in the wind tunnel, the BSD is able to test and optimise the sporting equipment, as well as consult with the BMW aerodynamics experts.

BMW also provides important expertise on carbon technology. In the area of CFRP (carbon-fibre-reinforced plastic) in particular, BMW has unique knowledge as the first car manufacturer to make use of the material carbon in mass production.

Bobs are manufactured from carbon, a material with which BMW is very familiar; BMW demonstrates its expertise not only in car manufacturing and motorsport, but also in the America’s Cup, the most challenging sailing competition in the world. Thomas Hahn, who is head of the BMW technology transfer, has spent many years working on the construction of the high-tech racing yachts for two-time America’s Cup winner ORACLE Team USA.

He knows the challenges and the potential of carbon. The aerospace engineer uses his specialist knowledge to support bobsleigh builder Johannes Wallner, who manufactures the 2-man and 4-man bobs for the reigning world champion bob teams Lochner and Friedrich.

“First, we measured and digitalised the bob, and optimised it using computer simulation,” explained Hahn. “To produce the prototypes, we used a precision mill to manufacture a negative mould that will then be used to bring the carbon fibres to the exact desired positions. This precision form guarantees that the test, measurement and race results are transparent and comparable. Which means the sleds produced can be reproduced identically.”

The positions of the three pushers require different qualities. For example, two requires more power, four requires more speed and a higher step frequency. In the 4-man sled of Francesco Friedrich, this position is held by former decathlete Thorsten Margis, who is an imposing 1.92 metres tall. He needs more space to position himself as flat as possible in the bob to reduce air resistance. The position of his seat needed to be adjusted for this.

Head coach René Spies said: “Over the summer we optimised the Wallner bobs for the teams Friedrich and Lochner. Many ideas for improving the aerodynamics of the sleds and for the seat positions were developed and implemented. The valuable tests in the BMW wind tunnel enabled us to confirm the positive results and get that last hundredth of a second for our Mission Gold. A big thank you goes to BMW for this.”

Hahn said: “Changing the seating positions is nowhere near as trivial as one might think. Such optimisations change the centre of gravity and the handling, among other things. But we are very pleased with the result. Identifying and implementing the optimum compromise is a challenge that has to be mastered every day in car manufacturing.”

The seating positions of the athletes have a huge influence on the aerodynamics. The strict regulations allow only very restricted options for optimising the sleds. “The aerodynamic losses related to the crew and shape of the sled need to be minimised,” said Lochner. “The wind tunnel of the BMW Group is invaluable for getting the last modicum here. We need to scrape together every hundredth of a second that we can find so that we can celebrate a gold, silver or bronze medal again at the Olympic Games.”

Friedrich confirmed this: “The aerodynamics are crucial in the 4-man sled in particular. The BMW wind tunnel is extremely high-tech. We were able to take a lot of measurements and try out various options within a very short time, which we probably couldn’t have done anywhere else. It is fantastic.”

The sophisticated infrastructure of the BMW Group’s Research and Innovation Centre (FIZ) in Munich, which the BSD has access to, contains one of the largest and most innovative wind tunnels in the world. It facilitates wind speeds of up to 300 km/h. And, thanks to enormous computing capacity, various aerodynamic models can be calculated within a very short time. “We can optimise the bobs here in exactly the same way as we optimise our cars,” said Holger Gau, BMW expert for 3D simulation methods.

“We look at turbulence, analyse pooling regions and use appropriate shape changes – or changed seating positions – to try to minimise resistance.” A final test before the Olympic Games showed that the aerodynamic measures achieved a reduction in air resistance of up to six percent. In theory, this should make the sleds a tenth of a second faster per run. However, compared with the test laboratory, factors such as weather and track conditions, as well as the sliding line, are significant in the ice channel.

Like in the car development process, the majority of the work is first done on the computer. And the BMW Group has first-rate equipment for the virtual tasks as well. “We use high-performance software tools to evaluate the aerodynamics of the combination of the bob and the team, and to optimise this virtually. Then the verification and fine-tuning take place in the wind tunnel,” explained Gau. “It’s all about finding the optimum way to interlink the advantages of both worlds – digital and real-time in the wind tunnel.”

And the potential is by no means exhausted. In the BMW Group’s energy test centre (EVZ), three thermal wind tunnels and two air-conditioned chamber test beds can simulate snow, rain, cold, heat and even altitude. The same facilities that make the BMW vehicles more efficient in a variety of climatic conditions provide the winter sports athletes and their sporting equipment with controlled test conditions, which are like those they will really experience in the ice channel. BMW hereby makes another contribution to BSD continuing their success at the 2018 Olympic Games.