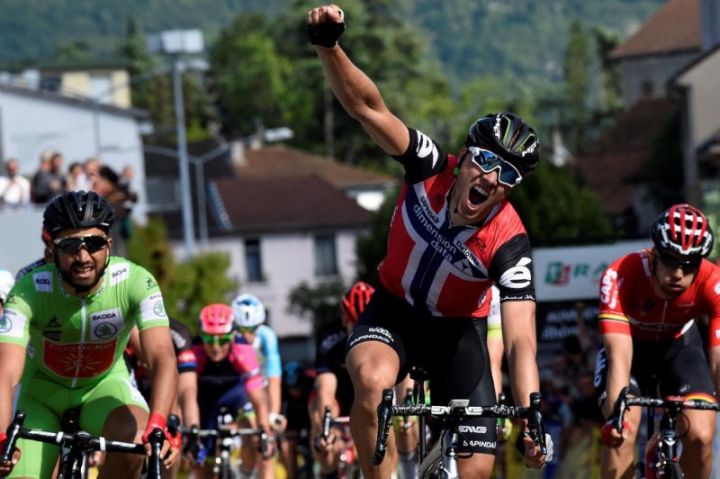 Edvald Boasson Hagen stormed to victory in a thrilling bunch sprint on stage four of the Criterium du Dauphine on Thursday, after a flat but windy 176km run from Tain L’Hermitage to Belley.

Belley-born Maxime Bouet of Etixx-Quick Step led a three-man escape from early on and eventually launched a doomed final assault from 13km out, his solo effort being reeled in on the streets of his hometown with 3km to go.

Overall race leader Alberto Contador maintained his lead but only by four seconds as Sky’s Chris Froome climbed to second ahead of Richie Porte at six seconds in third.

There had been a moment of panic in the speeding peloton just over 2km from the line, when three riders were caught in a nasty high speed fall that shook up the finish.

Apart from the fall, Thursday was a day for the GC contenders to relax in the peloton ahead of three days in the mountains where the winner will place himself as favourite to win July’s Tour de France.

On Friday the race continues with a 140km run to a summit finish at the Alpine ski station at Vaujany, which culminates with a 6.4km climb at a 6.5 percent gradient.

Results and standings after stage four of the Criterium du Dauphine, a 176km run from Tain-L’Hermitage to Belley on Thursday: