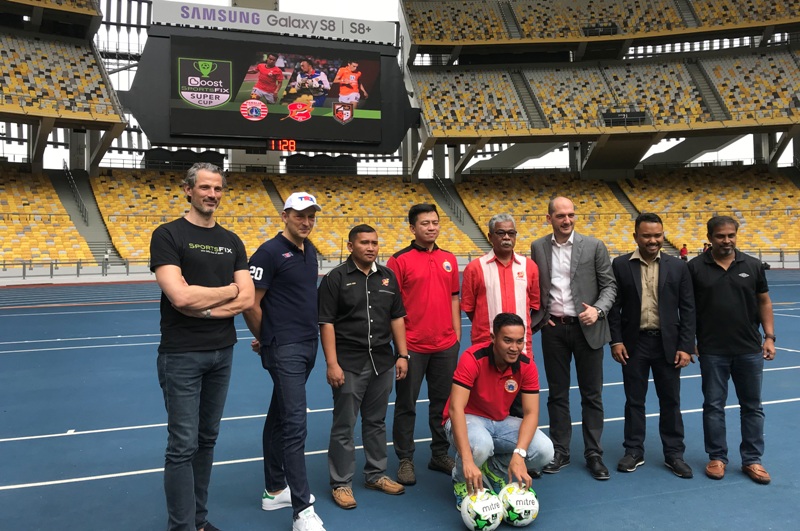 The newly-renovated National Stadium at Kuala Lumpur Sports City (KLSC), has been chosen as the venue for the inaugural Boost SportsFix Super Cup which will see three premier professional clubs from across the region do battle.

It is the first football action at the National Stadium after it was heavily renovated for the recent 29th SEA Games.

“We are excited to see Malaysia’s National Stadium utilised for football. We are confident the National Stadium will provide football fans with a premium experience that will rival any stadium in the world. We look forward to hosting the teams and their fans,” said Azman Fahmi, CEO of the Perbadanan Stadium Malaysia.

“Through this inaugural Boost SportsFix Super Cup, our aim is to create a premium football tournament by bringing top teams from across the region together,” said Marcus Luer, Group Chief Executive Officer of Total Sports Asia.

“TSA’s role in this event is very unique as we on one side working closely with Perbadanan Stadium Malaysia (PSM) on the commercial side of KL Sports City and we are also behind the SportsFix OTT (over-the-top) platform. As such, we are proud to bring top notch football to the fans in the best Stadium in the country as well as on SportsFix, the best digital Sports Stadium in Malaysia. We are also delighted to see digital mobile wallet, Boost join us in supporting this event.”

Kelantan FA or the Red Warriors are well known in Malaysia, having won the fabulous treble – the Malaysian Super League, the FA Cup and also the Malaysia Cup in 2012. They have added on various other accolades in recent years and will be looking to provide a fierce challenge for the domestic silverwares in Malaysia in 2018.

Persija Jakarta is considered the best-supported club in Indonesia with their fans fondly called “Jakamanias”. The team finished 4th in the Gojek Traveloka Liga 1 and is hoping to perform even better next season and the management sees the Super Cup as an important part of their preparation. The team has a strong Fan base in Malaysia too and expects their Jakamanias to show up in full force for their matches.

Ratchaburi FC finished sixth in what many believe is the toughest league in ASEAN, the Toyota Thai Premier League and will be a tough challenger for Kelantan and Persija.

“The long-term objective for our new event is to feature teams from across the world and bring teams here of the Leagues which we are featuring regularly on SportsFix.tv. With Italian Serie A, Chinese Super League and K League also a regular feature on SportsFix, the tournament will only get bigger and better. We expect to have Club teams from several other countries participate in the future. For now, we are sure that all three teams from the Malaysian, Indonesian and Thai League will fiercely battle to not only take home the inaugural Boost SportsFix Super Cup but also garner the purse of USD10,000,” added Luer.

The inaugural tournament will be presented by the mobile payment system from Axiata, Boost and SportsFix, ASEAN’s first OTT platform that delivers live and VOD sports content. SportsFix will be streaming all games live on its SportsFix.tv platform.  Boost customers will be able to purchase tickets to the matches as well as register online for SportsFix thru the Boost App.

“After launching  our SportsFix platform in Malaysia this year, the Boost SportsFix Super Cup 2018 is the next logical step for us as we are rolling out our services in Indonesia, Thailand and other ASEAN markets next year. SportsFix is young and mobile-centric. There is no better way to engage with our fans than establishing our own events and creating unique content for our fans. What Netflix or iflix do in creating their own entertainment content, we do it in sports!” commented Carl Kirchhoff, CEO of SportsFix.

Axiata Digital Services, Chief Strategy Officer, Zoran Vasiljev added “Boost is thrilled to be partnering with SportsFix in supporting the Boost SportsFix Super Cup football tournament.  Boost is a new mobile e-wallet that will revolutionise the way people pay in today’s digital world. Our partnership with SportsFix will see us deliver both streaming and live events content to over 20 million football fans in Malaysia”.

Football fans have the chance to experience the games live at the impressive National Stadium at KL Sports City. Tickets, will go on sale on 13 December 2017, are priced from RM 10 (Students) to RM15 to RM120 for adults and are available via http://sportsfixcup.com/

* all games played at Malaysia’s National Stadium, KL Sports City.  Each team plays each other once, 3 games in total (Round Robin Format)