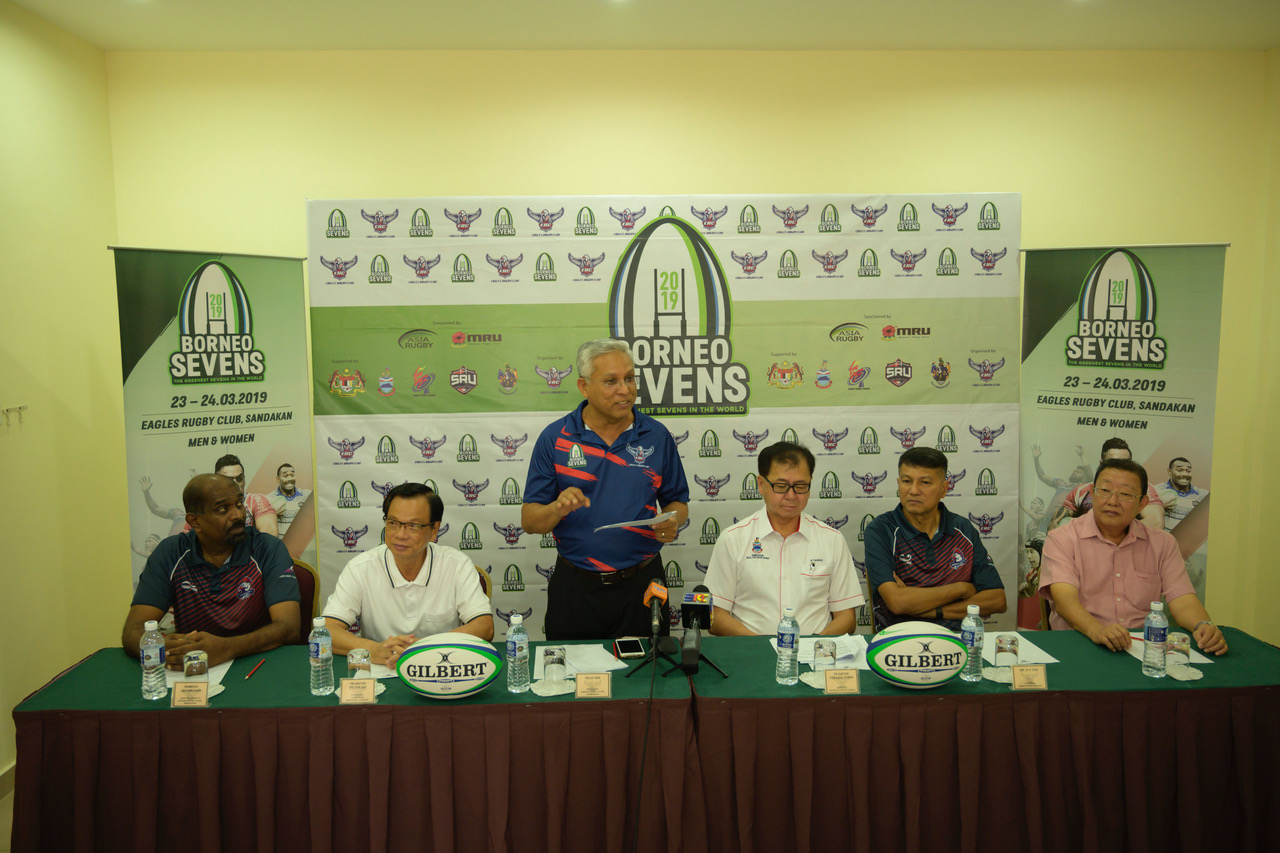 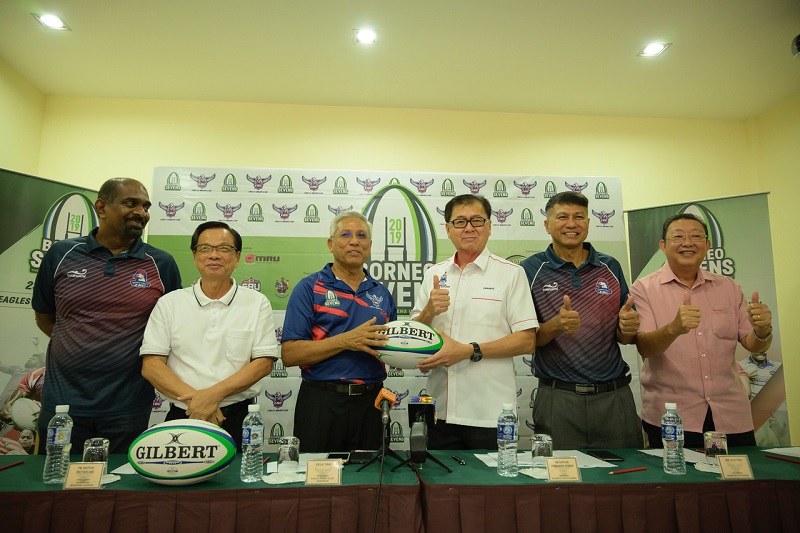 The Borneo Seven International Clubs Rugby tournament to be held at Eagles Rugby Club on the 23rd and 24th March continues to raise its standards every year and internationally recognised.

Today the Sabah Minister of Youth and Sports YB Datuk Frankie Poon at the Press Conference to announce the details of the tournament, praised Eagles Rugby Club for their dedicated efforts in successfully bringing such a high level tournament to Sabah, particularly Sandakan.

From a humble beginning in 2001, 18 years ago, when local rugby aficionados first mooted the idea of organising a rugby tournament in Sandakan to give locals a chance to test their competition skills, it was also one of the events of the Sandakan Festival which was a month-long festival organized by the Sandakan Municipal Council to promote Sandakan as the Nature City of Sabah.

Today the tournament has earned world-wide recognition and is sanctioned by Asia Rugby, the governing body of the game in Asia.

In 2008 a major change was made when it was decided to forgo initial Tens format and use the Sevens format instead. This was successfully implemented in 2009 and the rest is history and the tournament is now popularly known as “The Greenest Sevens In The World”, in view of the fact that it is played in Borneo, and of lush tropical forests.

“Over the years, the majority of the big international sports events have been held in Kota Kinabalu, probably due to the convenience of more direct international flights and more accommodation options.

However, I believe that the infrastructure in Sandakan has now developed sufficiently to handle even the biggest events. It is therefore fair that Sandakan should now get a fair share of hosting these prized sports events for our locals to enjoy. It is good to see that rugby is leading the way,” said Datuk Frankie.

Datuk Frankie said that as the Minister of Youth and Sports for Sabah, he desires to see Sabah producing great athletes and sportsmen who will bring sports glory to Sabah and Malaysia.

“With Sabah Rugby Union and Eagles Rugby Club undeniably among the pioneers in implementing the latest techniques and modules in the science of sports development, I can foresee a good future for the game here. In fact, the Sabah Rugby fraternity has set a pace and standard in sports development that should be emulated,” he said.

He also expressed his confidence that the victory of the Sabah men’s team at the 2018 Agong’s Cup is an indication that greater things are on the way. So too with the Sabah women’s team which won the SUKMA gold medal without conceding a single point throughout the tournament.

Datuk Frankie congratulated organizing chairman Velayuthan Tan, the club and Sabah Rugby president, for his dedication to the game and putting Sabah in the international map.

Also present at the Press Conference was Datuk Peter Hii, the President of the Sandakan Town Council.

The Minister also expressed his confidence that Sandakan Municipal Council, will be able to bring even greater development and progress to Sandakan so that it could stand head and shoulder along with other major towns in the region as a hub for sports tourism.

Vela in announcing that the women’s event will continue said: “We are continuing with the women’s event this year due to popular demand. Some very strong women’s teams are coming, including defending champions, the Hong Kong Dragons. Two top ranked women’s team from Japan will also be coming to challenge their peers for the coveted women’s crown. In the men’s category, our host touring team, the Borneo Eagles, will also be trying to regain the Cup title which was won by the Australian Iconz Rugby Team last year. “

“Eagles Rugby Club is delighted to be able to play hosts to all teams and officials from near and far. I would like to thank all of them for their support of this tournament. Being a club with our own touring team, we know how difficult and costly it is to send a team to take part in tournaments, especially to overseas events. Therefore, we really appreciate their effort in coming all the way to Sandakan and to our club – The Home of The Eagles,” said Vela.

“The Borneo 7s has moved up to a level where it is recognised by Asia Rugby,” added Vela who was among those who initiated the inaugural event.

“With the tournament getting the nod from Asia Rugby, we can expect even stronger foreign teams participating. We are confident that rugby in our country Malaysia and particularly in the state of Sabah will progress to a stage where it will earn its place as a “core sport’ in Malaysia. In fact, I would say the game has already taken firm root and is all set to further flourish,” said Vela.

Russia will be making their debut in the tournament which sees 13 countries participating.

During the last 17 years, the tournament has so far proudly hosted renowned international teams such as Daveta (Fiji), Marist St. Joseph (Samoa), Aotearoa Maori Club (New Zealand), Penguins International (UK) as well as those from Singapore, Dubai, Kenya, Australia, South Africa, Belgium, Chinese Taipei and the Philippines. Reigning champions Iconz Rugby Team from Australia will be back to defend the men’s crown this year.

The elite Sabah teams such as the Sabah Eagles (state team), the OSCA/Warriors, KK Sharks as well as host team ERC Borneo Eagles have all tasted action at this tournament.

“We want local sports fans to be given the chance to witness top class rugby. We want the game to be revitalized here in Sabah, particularly Sandakan. The Borneo 7s will have a very positive impact especially for school children.  When they see top class action it will sharpen their appetite for the game and goad them towards striving for greater excellence,” Vela said.

Vela, who is also the deputy president of Malaysia Rugby and a committee member with Asia Rugby, expressed his determination to help lift the standard of rugby in Malaysia to greater heights.

Vela expressed his sincere thanks and appreciation to the Sabah Government for supporting rugby. He specially thanked Sabah Chief Minister YAB Datuk Seri Panglima Haji Mohd Shafie Apdal for his support and appreciation of the Sabah Team that recaptured the prestigious Agong’s last year.

Vela also thanked all sponsors and donors for their generous contributions that have made the tournament possible.
To gain more support for the game and promote the tournament to a wider audience, the organizers will again be providing free ‘live streaming’ of the event.

The teams competing in this year’s tournament are as follows: