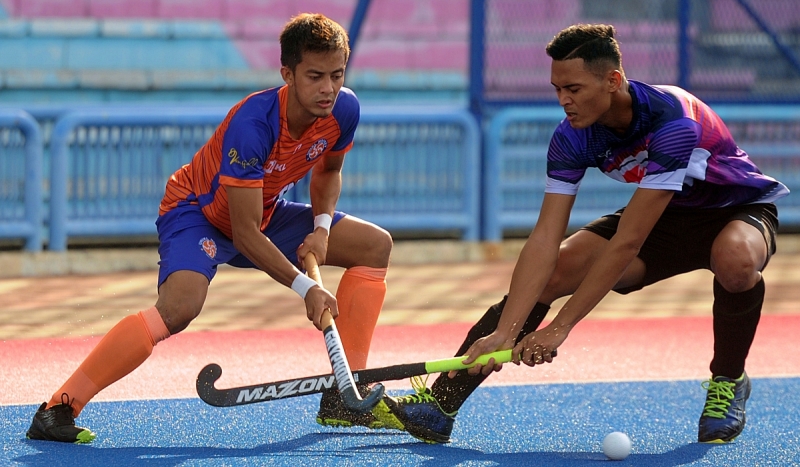 Universiti Kuala Lumpur (UniKL) buried the brouhaha of last weekend on the field antics by overzealous players and stayed focused en route to a 7-0 victory against Universiti Teknologi MARA (UiTM) in the TNBMHL Premier Division match at the Tun Razak Hockey Stadium today.

Going by present form and rankings, the Premier League defending champions enjoyed a stroll in the park against UiTM whose shoulders are burdened by weight and expectation of stopping their opponent’s potent attacking machinery and unbeaten run.

“I think this was a great game for the youngsters in the team who did a good job. I’m very impress with them especially the way Farhan (Mohd Zain) came strongly to score the seventh goal,” said UniKL coach Arul Selvaraj. UniKL have now earned nine points from three matches.

“David Harte just arrived and obviously we have to leave him out. Overall the team is jellying well and I’m happy at the movements coordinated in this game,” he added.

UniKL took a 4-0 lead going into the first half interval. Drag-flick specialist Muhammad Razie Abdul Rahim opened accounts with a penalty corner conversion in the second minute, Faridzul Afiq extended the lead in the seventh minute, Dutchman Roel Bovendeert made it 3-0 in the 13th minute and Izwan Firdaus netted the fourth goal two minutes before the end of the first half.

The 2019 TNB Cup runners-up started the match without Australian Kieran Govers while their No 1 goalkeeper Harte from Ireland arrived from Dublin hours earlier and will only see action on Friday against TNB Thunderbolts. Govers, however, seems in his jovial self and look well on the road to recovery following a not-so-serious head injury suffered in the Charity Shield match last week.

The second half was again dominated by UniKL as they earned two consecutive penalty corners early in the game but blew away chances with scrappy play in the semicircle.

But it was not long before they went 5-0 ahead through Faridzul’s brace in the 45th minute, Bovendeert scored the sixth in the 49th minute – his second goal of the day while youngster Muhamad Farhan Mohd Zain sealed it with a superb field goal.