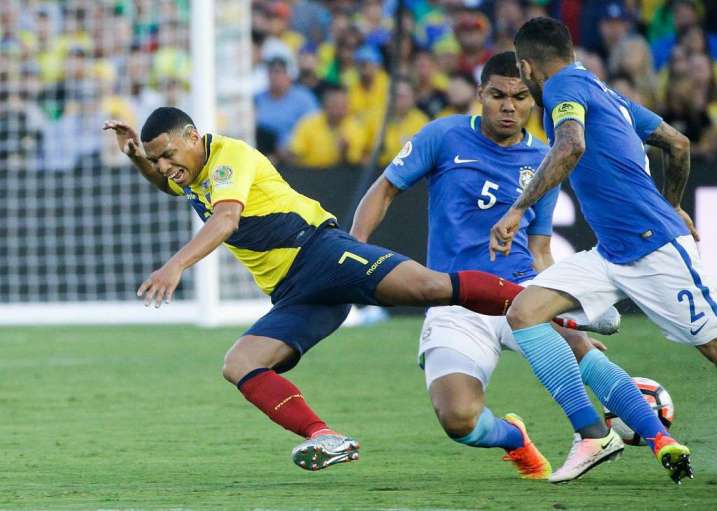 A controversial refereeing decision spared Brazil’s blushes at the Copa America Centenario on Saturday as the five-time world champions opened their campaign with a goalless draw against Ecuador.

Ecuador looked to have taken a sensational lead at the Pasadena Rose Bowl midway through the second half when Brazil goalkeeper Alisson fumbled a cross from Miller Bolanos into his own net as he stooped to gather at the near post.

But as Ecuador’s bench and players celebrated, the match officials whistled for a goal kick, after ruling that the ball had gone out of play shortly before Bolanos crossed into the six-yard box.

Replays of the incident appeared to suggest the ball was fractionally still in play and that Brazil had been saved from a losing start to Group B by an officiating error.

Brazil’s players left the field to scattered boos from the 53,158 crowd at the Rose Bowl, scene of the South American giants’ 1994 World Cup final triumph.

“I saw it 25 times on video just now and the ball never went out completely — maybe 65 percent but not completely,” said Ecuador head coach Gustavo Quinteros.

“The linesman is so sure of himself even though he is 50 metres away,” the Bolivian complained.

Brazil manager Dunga said he hadn’t been close enough to judge whether the goal should have been allowed.

“From the angle I was at it was difficult to see if the ball went out,” Dunga said.

“The players who were closer said it did.”

In the day’s other Group B game, Peru got off the mark with a 1-0 victory over Haiti in Seattle which saw striker Paolo Guerrero surpass Teofilo Cubillas as his country’s leading international goalscorer.

Guerrero, 32, the top goalscorer in the past two editions of the Copa America, headed home his 27th international goal in the 61st minute at CenturyLink Field, home of the Seattle Seahawks NFL team.

The win was just about deserved for Peru, who created the better chances but struggled to break down a well-organized Haiti defense.

Peru looked to be cruising to three points but had a scare in the dying seconds when Haiti’s Kervens Belfort somehow headed wide from close range with the goal at his mercy.

The Peruvians now face Ecuador on Wednesday while Brazil travel to Florida to play Haiti in Orlando at the Citrus Bowl, the venue for the other game on Saturday, a drab 0-0 draw between Costa Rica and Paraguay in Group A.

The match kicked off in sweltering late afternoon temperatures of around 92 degrees Fahrenheit (33 degrees Celsius) and the energy-sapping conditions contributed to a lacklustre spectacle.

Paraguay’s Argentine coach Ramon Diaz slammed the decision to schedule kick-off at a time when temperatures are known to be at their most fierce.

“It was crazy to play at the time we played,” Diaz told a post-game news conference.

“I would have liked them (the organisers) to take into consideration the players themselves, they are the main part of the show after all,” he added.

“The kick-off times should be made with players in mind. I know there are commitments with TV and so on but the conditions took their toll,” he added.

Most professional club games held in Florida during the summer, including those of local Major League Soccer team Orlando City, are scheduled for the mid-evening when temperatures have dropped.

Asked if he had ever been involved in a game played in such conditions, Diaz, who performed in Argentina, Italy and Japan during his playing career said: “Never. I really think the players should be respected.” – Agence France-Presse