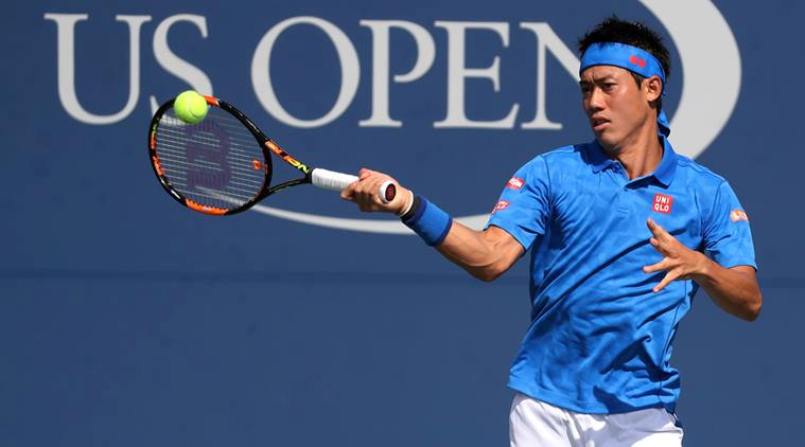 Kei Nishikori stunned Andy Murray to reach the US Open semi-finals, holding his nerve in a breathtaking final set to move two wins away from becoming the first Asian man to capture a Grand Slam singles title.

Japanese star Nishikori clinched a dramatic 1-6, 6-4, 4-6, 6-1, 7-5 comeback triumph in a shade under four hours against the Wimbledon and Olympics winner and 2012 US Open champion.

Waiting for the 26-year-old next will be either 2009 US Open champion Juan Martin del Potro or third seed Stan Wawrinka.

“It was so exciting on the court but I tried to stay calm. It was really tough,” said Nishikori after reaching only his second Slam semi-final after his runner-up spot in New York in 2014.

“He’s a great returner, there were lots of up and downs. I didn’t start well.”

In a match which featured 17 breaks of serve, Nishikori prevailed for only his second win in nine matches against the world number two.

His win came just three weeks after losing to Murray in the Olympic semi-finals.

Murray looked to be in control at two sets to one ahead and carving out a break point in the third game of the fourth when a loud gong-like sound burst from the malfunctioning public address system in Arthur Ashe stadium.

It thudded around the stadium and echoed eerily beneath the roof which had been closed due to rain midway through the second set.

Umpire Marija Cicak ordered the point to be replayed much to the irritation of the Briton who lost his composure and the next five games as an acrobatic Nishikori levelled the tie.

Murray refused to blame his defeat on the incident.

“Definitely I would say to 4-1 I didn’t play a good game after I got out of the change of ends, and then he held pretty comfortably the next game,” said Murray.

“But after that, I don’t think so. There was a lot of time.”

The phantom noise emerged again later in the set and Murray’s mood was not helped when a startled butterfly flew around the court, causing great merriment when it obstinately clung to the net.

The butterfly was removed in the changeover but Murray’s black mood refused to budge as he carried on a running debate with the umpire and himself.

Nishikori broke for 1-0 in the deciding set and backed it up for 2-0 before Murray stopped a seven-game losing streak to hold.

Murray, with his focus suddenly rebooted, broke back for 2-2 against the man he had defeated in the Olympic semi-finals.

But back came Nishikori, stunning his rival to break again for 3-2 before holding for 4-2 as both men thrilled with a series of big hits, subtle touches and exhausting athleticism.

Nishikori surrendered the advantage again, giving up a 40-0 lead in the eighth game and missing an easy volley as Murray came back for 4-4.

The Briton was soon 5-4 up but Nishikori, showing nerves of steel, held and took victory when Murray blinked first in the 12th game, burying a backhand in the net.

“I think definitely under the roof he was able to dictate more of the points. He was playing a bit closer to the baseline than me and taking the ball on a little bit more,” said the second seed.

Later Wednesday, world number 142 del Potro will bid to become the lowest ranked man to reach a Grand Slam semi-final since number 237 Vladimir Voltchkov made it to the last four at Wimbledon in 2000.

The 2009 champion, whose career was almost derailed by a series of wrist injuries, tackles third seeded Wawrinka, who is chasing a third semi-final place at the US Open in four years.

Wawrinka hasn’t beaten del Potro for eight years while the 27-year-old Argentine knocked him out of Wimbledon in the second round this year.

Munoz soars with eagles to lead at Zozo Championship @ Sherwood