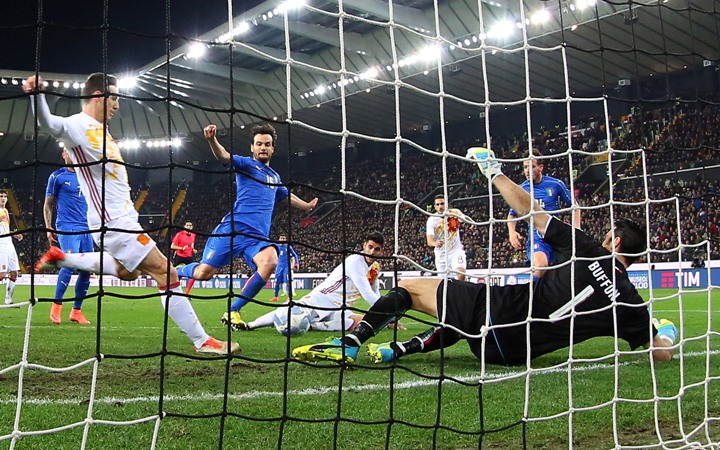 Football went back to business on Thursday but a series of Euro 2016 friendlies were played out against a sombre background following the Brussels attacks and the death of Dutch legend Johan Cruyff.

In Prague, where the Czech Republic hosted Scotland, there was a minute’s silence to remember the 31 people killed in Brussels and to honour Cruyff who lost his battle with lung cancer at the age of 68 on Thursday.

A minute’s silence was also observed for the Brussels victims in Cardiff where Wales faced Northern Ireland and in Udine where Italy met defending European champions Spain.

Meanwhile, Cruyff was remembered in Rotterdam where Feyenoord and Sparta halted their friendly game for a minute’s applause in the 14th minute.

Cruyff famously wore the number 14 for Ajax and the Dutch national team during his playing career.

Italy went looking for revenge for their 4-0 defeat to Spain in the Euro 2012 final and were well set when Lorenzo Insigne ended David De Gea’s six-game cleansheet run in the 67th minute.

In Prague, Scotland, playing in pink, took the lead against the Czech Republic after 10 minutes through Ikechi Anya.

The Watford winger beat Tomas Koubek in the Czech goal after being put through by Ross McCormack.

McGregor was called upon again in the second half to keep out the Czechs who face Spain, Turkey and Croatia in the Euro finals in France in June and July.

Scotland failed to qualify for the Euros and are building for their 2018 World Cup qualifiers.

Substitute Simon Church scored an 89th-minute penalty as Wales snatched a 1-1 friendly draw with Northern Ireland in a pre-Euro 2016 sparring contest in Cardiff.

Craig Cathcart put the visitors ahead on the hour, but Church, who is on loan at Aberdeen from Milton Keynes Dons, won and scored a late spot-kick to stretch his side’s unbeaten series of matches against Northern Ireland to eight games.

Wales, who will be playing in a first major tournament since the 1958 World Cup, are grouped with England, Russia and Slovakia in France.

Ukraine enjoyed a 1-0 win against Cyprus in Odessa after Shakhtar Donetsk midfielder Taras Stepanenko scored the only goal.

Ukraine are in the same group as Germany, Poland and Northern Ireland at Euro 2016.

Cenk Tosun scored both goals as Turkey beat Sweden 2-1 in Antalya with defender Andreas Granqvist replying for the visitors eight minutes from time.

Sweden are in the same pool as Belgium, Italy and the Republic of Ireland in the finals in the summer.

They were without star striker Zlatan Ibrahimovic who was rested by coach Erik Hamren although he is expected to play against the Czech Republic next Tuesday.

Iceland, who will feature in France alongside Austria, Portugal and Hungary, slumped to a 2-1 defeat against Denmark who failed to make the finals of a tournament they won in 1992.

Nicolai Jorgensen scored both of the Danes goals at Herning in the 50th and 54th minutes.