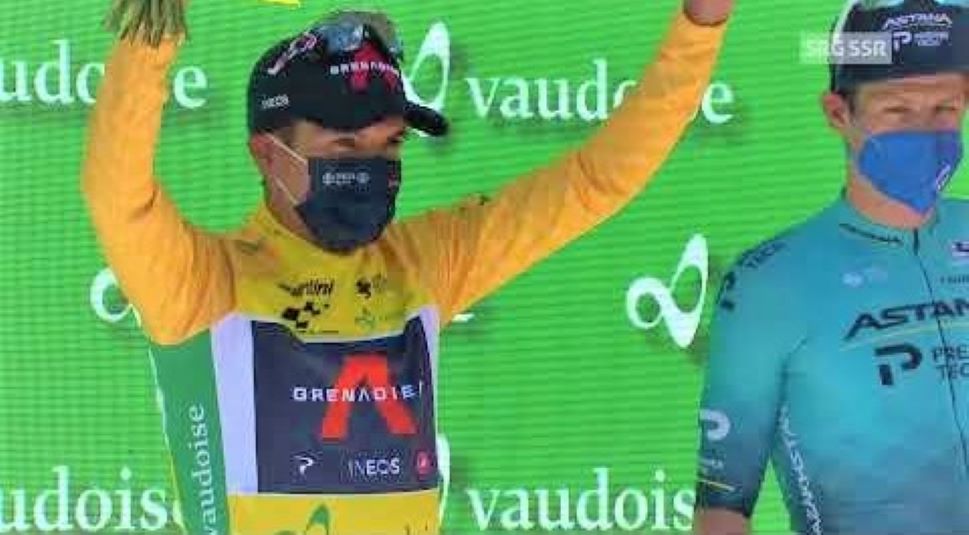 With Richard Carapaz (INEOS Grenadiers), the strongest climber of the pack has won the 84th Tour de Suisse. The Ecuadorian rider won with a bonus of 17 seconds over Colombian rider Rigoberto Uran (EF Education – Nippo). The final stage in Andermatt was won by young Swiss rider Gino Mäder (Bahrain).

During the final sections of the Tremola climb, Mäder launched his pursuit on Michael Woods (EF Education – Nippo) who was in the attack. He bridged up with the Canadian rider on the descent towards finish town Hospenthal. Mäder easily won the two-man sprint without coming off the saddle. “Of course I’m super happy. I started this last mission with the goal to do well. That worked out very well”, said the young pro who already made a name for himself by winning the sixth stage in the Giro d’Italia.

With Mäder’s success and the stage wins from Stefan Küng (in Frauenfeld) and Stefan Bissegger (in Gstaad), with the latter also winning the points classification, it wasn’t just a Tour de Suisse but also a Tour from the Swiss. The Swiss pro rider generally rode very aggressively thus living up to the reputation of the Swiss’ national stage race.

During the queen’s stage on Sunday the overall leader, Richard Carapaz, passed the Tremola test. Both runner-up Rigoberto Uran and Danish rider Jakob Fuglsang (Astana) attacked the leader but Carapaz answered swiftly. It should be mentioned that Carapaz was able to rely on an extremely strong INEOS Grenadiers team. Edward Dunbar, for example, stayed with his leader until the finish line in the stage over the Gotthard pass. Team-mates Pavel Sivakov and Rohan Dennis did valuable pacing work up until halfway up the Gotthard climb.

Carapaz showed a first sign of his potential to become the overall winner of the Tour de Suisse during the mountain top finish in Leukerbad. During the 6th stage, the first of two Alpine stages, the Ecuadorian rider kept his rivals in check.

Only during the time-trial over the Oberalp pass he showed some sign of weakness, making the tension mount ahead of the final stage. Carapaz, winner of the 2019 Giro d’Italia, is a worthy winner of this Tour de Suisse. The South American rider will now switch focus to the Tour de France where he’ll be one of the spearheads together with Geraint Thomas and Richie Porte. – www.tourdesuisse.ch