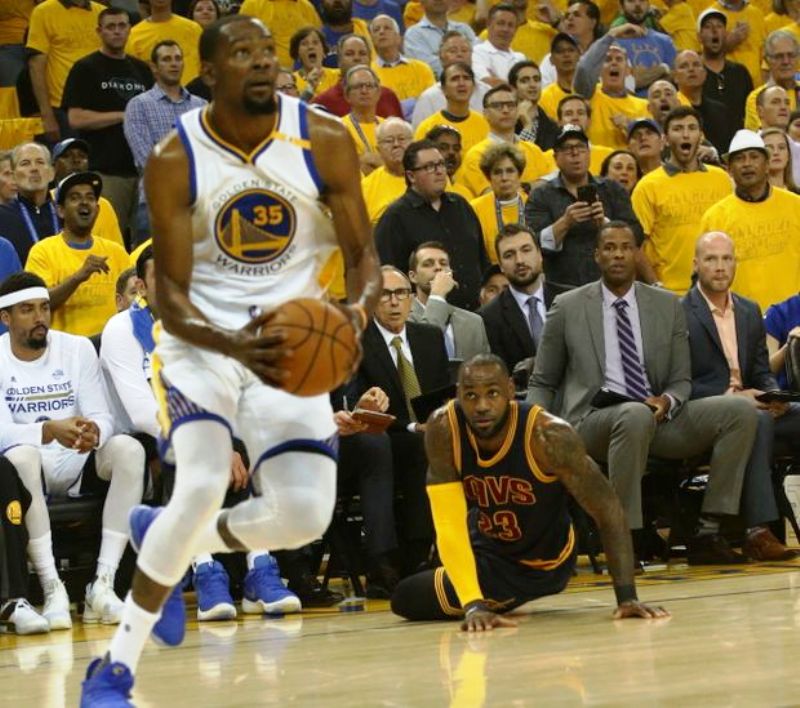 LeBron James and Kevin Durant will be banging bodies in Sunday’s second game of the NBA Finals, with defending champion Cleveland vowing to get physical after dropping the opener to Golden State.

“You have to be the first one to hit,” said Cleveland coach Tyronn Lue. “You have to bring a physicality to the game and we weren’t as physical as we needed to be. We have to do a better job of being on bodies and bringing the contact.”

Warriors forward Durant scored 38 points, many of them on unchallenged slam dunks, in sparking Golden State’s 113-91 triumph to launch the best-of-seven title series.

“I’m pretty sure that won’t happen tomorrow,” Durant said Saturday. “They’re going to be way more aggressive. They’re just going to muck the game up and be physical. We have to come out and be even more physical than we were in game one. We definitely have to be better.”

Foul trouble could become an issue when contact increases, but the Cavs plan to walk the fine line between hard-nosed play and over-the-top bumping and grinding.

“We won’t dirty up the game. We just play physical,” Cavaliers guard J.R. Smith said. “Some people don’t like physicality.”

Cavaliers star James, in his seventh consecutive NBA Finals, said being more physical “has always been something we talk about so we look forward to seeing what we can bring.

“You need to be more aggressive. You need to have a better attitude — if it were that easy, we would all do it. It’s not that simple, especially when you’re going against such a well-oiled machine in Golden State.

“I’ve seen a lot of great teams and they rank right up there.”

Cleveland will try to disrupt 3-point sharpshooters Stephen Curry and Klay Thompson and deny slam dunks to Durant, who seeks his first title after moving from Oklahoma City last July.

“They’re going to try to amp up the physicality,” Warriors acting coach Mike Brown said. “They’re going to grab a little bit more and knock us off our routes and do what they can to disrupt whatever we try to do offensively.

“We’ve played teams in the past that have been real physical with us, so we feel like we’ll be OK.”

Brown is filling in for Steve Kerr, who has missed the past 11 playoff games with issues from a 2015 back surgery. His status for Sunday is uncertain.

“I have to bring more energy,” the Canadian said. “It’s going to be a wrestling match down there and you have to make it tough for them and just try to wear them out, just take it to another level.

“Playing against the Warriors, you can’t just play hard. You have to play hard to a level where it’s past the thermostat. It’s like a boxing match. You have a lot of rounds and tomorrow is round two.”

“This is definitely going to be a track meet,” Iving said. “We’ll be locked in. The focus level will definitely be at an all-time high.”

Physicality will be there too, Irving said.

“We definitely have to come out with that if we have any chance,” he said. “But the team that’s going to win that battle is who can sustain it for the longest.”

As Cavs reserve Richard Jefferson put it: “The formula is there. We just have to execute it and not panic.”

Cavs forward Kevin Love grabbed 21 rebounds in the opener and will be a key body inside.

“Physicality being brought to the series is going to be huge for us in setting the tone,” Love said.

Warriors inside man Draymond Green said his team is ready for what Cleveland will bring.

“That’s definitely a focus, not only prepare for theirs, try to meet and exceed it,” Green said. “We have to continue that if we want to win the series.”

“When you have that margin of victory, they will let the game go a little bit further as far as contact,” said Warriors reserve Andre Iguodala. “You expect it to be physical and having to play through it.” – Agence France-Presse