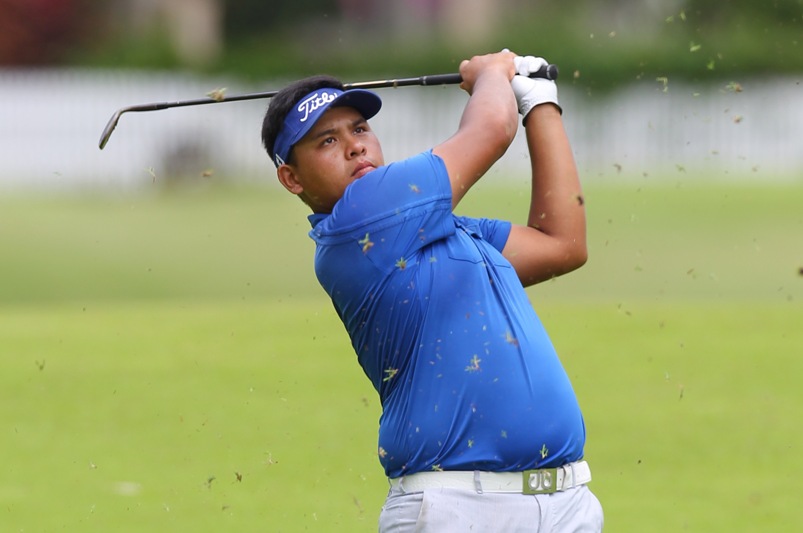 Thai prospect Chanachok Dejpiratanamongkul took advantage of his impeccable short game to sign for a solid eight-under-par 62, grabbing a share of the opening round lead with Australian Martin Dive at the Singha Phuket Open on Thursday.

The 23-year-old Chanachok, nicknamed ‘Tap’, fired one eagle and seven birdies against a bogey to match the efforts of Dive, who returned with a flawless round highlighted by one eagle and six birdies, in the two million baht (approximately US$58,140) event, co-sanctioned by the Asian Development Tour (ADT) and the All Thailand Golf Tour.

Pawat Prachoomsrisakul of Thailand, who turned professional just three days ago, trailed by one shot in third place on his own while a host of players, including in-form Mitchell Slorach of Singapore, Malaysia’s Arie Irawan and South African Mathiam Keyser, shared fourth following matching 64s at the highly-rated Laguna Golf Phuket.

Chanachok came in tied-27th at the Asian Tour Qualifying School in January to secure his playing rights for the 2017 season. He had been impressive in three starts on the region’s premier Tour so far, finishing tied-15th in Chinese Taipei last month and tied-10th on home soil last week.

“My short game was really good. I had two chip-ins today. I chipped in from 20 yards for eagle on the ninth and on the difficult par-three 16 from 15 yards for birdie. I took advantage of all the par-fives too. I putted really well,” said Chanachok, who turned professional in 2015.

“This is my first time playing this course actually. I saw the leaderboard but I just stick to my game plan and didn’t think too much. It’s still early days but I am pleased with the way I started. I hope I can play the same way tomorrow and continue to stay focused,” Chanachok added.

Playing in his first year in Asia and only his fourth appearance on the ADT this week, Dive has enjoyed a superb season so far on the secondary circuit, winning the season-opener in Malaysia in January and securing a top-five finish, also in Malaysia, last month.

He sits in second place on the Merit rankings with a current haul of US$10,183. A top-five finish on the Order of Merit at the end of the season will earn him playing rights on the Asian Tour in 2018.

“I played pretty steady. I had a great save on the second hole after hitting a poor shot into the hazard on the right, with the ball plugged on a hill. I managed to get up and down to save par there and gained back a big momentum heading into the round,” said Dive.

Dive highlighted his round with a six-footer eagle putt on the seventh hole after finding the green in two with a five-iron from the middle of the fairways. He followed up with three birdies in-a-row from 14 to put himself atop the leaderboard.

“I stayed very positive and managed to play pretty nicely. I putted quite well and I didn’t get into any trouble after the second. I played with no expectations today. I just gave myself some good opportunities for birdies on the greens,” added the 31-year-old Australian.

The opening round of the Singha Phuket Open was suspended at 9.45am local time due to heavy rain before resuming an hour later.

Leading round one scores: