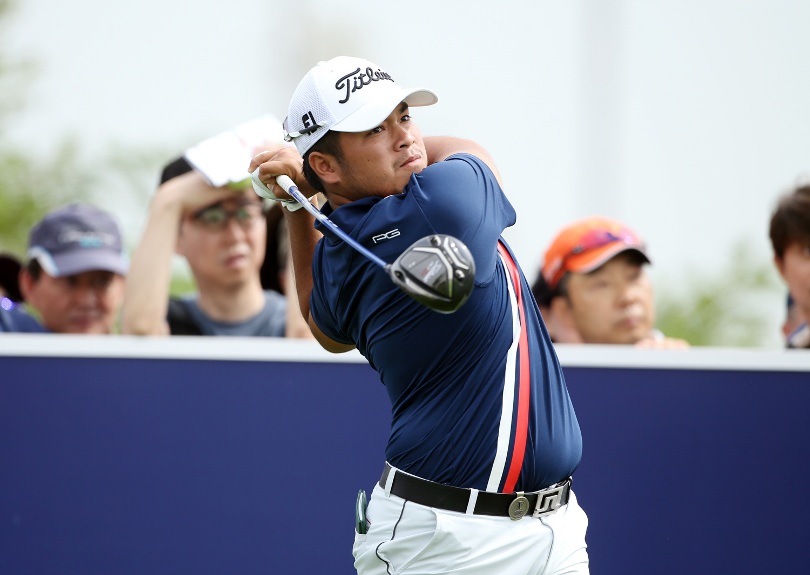 Thailand’s Thitiphun Chuayprakong conjured another magical performance with a flawless five-under-par 66 to stand on the verge of another Asian Tour victory after the third round of the Shinhan Donghae Open on Saturday.

Thitiphun will head into the final round of the KRW 1.2 billion (approximately US$1 million) event holding a two-shot advantage over Korea’s Taewoo Kim after he compiled a three-day total of 16-under-par 197 at the Bears Best Cheongna Golf Club.

Asian Tour rookie Scott Vincent of Zimbabwe continued his sensational run with a 68 to take outright third place while India’s Gaganjeet Bhullar is tied for fourth with Korea’s Byeonghun An and South Africa’s Jbe Kruger on 202 total.

Playing alongside An, who is the highest ranked player in the field this week, Thitiphun showed he is also an accomplished player in his own right.

The Thai ran out in 32 with four birdies on holes two, four, six and nine before adding another on the par-four 11 to sign for a bogey-free 66.

“I felt very good about my round today as I was confident. There was a little bit of pressure playing alongside Ben as the huge crowd were cheering him on.

“But overall it was a good experience. I’m very proud of myself as I showed that I could handle these pressures,” said Thitiphun, who earned his breakthrough at the Asian Tour season opening event in Bangladesh.

While Thitiphun was a figure of consistency and confidence, Vincent is hoping for divine intervention after enjoying a fairy-tale run at the Shinhan Donghae Open which is seeing the return of the Asian Tour as its new sanctioning partner along with the Korean PGA.

“I will just pray and hope I can settle those early nerves. It’s going to be there tomorrow, I know it and I’m just going to calm myself down as much as I can,” said Vincent.

Despite dropping two shots on the ninth and 10th holes, Vincent remains optimistic of emerging as the dark horse.

“I played well and I hit only two really poor shots all day. Apart from that, it was really solid. Not too much to be disappointed about as I’m still in the mix,” said Vincent.

Bhullar is hopeful his power drives will surge him towards a grandstand finish as he goes in search of his sixth win on the Asian Tour this week.

“I always think driving is one important aspect of the game and apart from that, it’s all about putting. And it all depends on whether you can give yourself opportunities inside 10-feet.

“The goal was to give myself more birdie opportunities and that’s what I did. I’ll try to repeat what I’ve been doing all week,” said Bhullar.

Defending champion An had a round to forget after he returned with a 70, marred no less by a double-bogey seven on 14.

“It was a disappointing round. I hit lots of fairways today and didn’t miss any shots until the 14. I hit a wayward shot and the second one was a disaster. I should have got more birdies.

“I still got one more day and I’m only a couple behind. So I still have a chance. I just got to keep grinding and the result will come,” said the world number 38.

Sponsored by the Shinhan Financial Group for the past 32 years, the Shinhan Donghae Open last featured on the Asian Tour schedule in 2002 and will be the last major tournament on the KPGA schedule.

Leading scores after round 3 of the The 32nd Shinhan Donghae Open being played at the par 71, 6933 Yards Bear’s Best Cheongna GC course (am – denotes amateur):