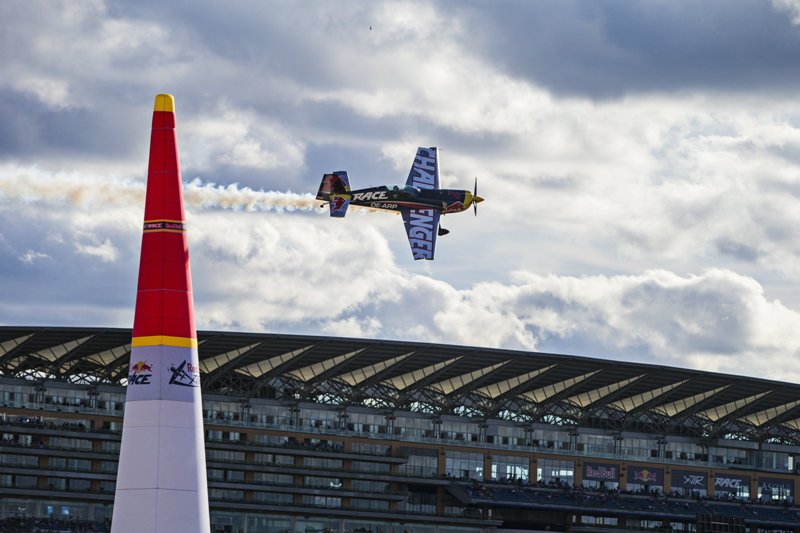 Pilot Cristian Bolton will mark a motorsport first for his native Chile on 1-2 October 2016, as he becomes the first pilot from the South American nation to fly in the Master Class that competes for the Red Bull Air Race World Championship.

As the official stand-by pilot for the 2016 world championship season, Bolton – who has earned seven Challenger Class podiums including third-place honors in the 2015 Challenger Cup final – got the call from race organizers with the offer of a Master Class seat for the Red Bull Air Race debut at the USA’s iconic Indianapolis Motor Speedway.

Before his three seasons in the Challenger Class, Bolton was a Lieutenant Colonel in the Chilean Air Force, where he earned the Top Gun Award, became Chief Instructor at the Air Force Academy and Tactical Fighter School and served as Squadron Commander and Leader of the prestigious Escuadrilla de Alta Acrobacia Halcones (aerobatic demonstration team).

Having piloted more than 4,600 hours in a variety of aircraft, today Bolton is a Certified Flight Instructor teaching aerobatics in Chile and the USA. He’s recognized by the Fédération Aéronautique Internationale as the top Chilean aerobatic pilot and is one of the leading aerobatic performers in all of Latin America. He holds advanced degrees in engineering, military aeronautics and human resources.

Bolton’s new assignment is one any pilot would face with mixed emotions. The Chilean – who earned the Master Class Superlicense required to participate in the Master Class in December 2015 – is filling the slot that became vacant when the beloved 2008 Red Bull Air Race World Champion Hannes Arch of Austria lost his life in a helicopter accident on 8 September 2016.

“I think these weeks have been very difficult for every person related with Red Bull Air Race. All our thoughts are toward his family, friends and [partner] Miriam,” Bolton states. “I was fortunate to know him since 2014 when I entered the Challenger Class. I can only emphasize his warmth, his vision of life – and vision not only in regard to this sport – his charisma and his boundless energy to achieve new goals. For me he is a true aviator and an example to follow.”

Joining the Master Class late in the season is a tough assignment, and not only because Bolton will be taking on the world’s best pilots on the most technically challenging racetrack setups. In the Challenger Class, pilots share the same standardized raceplane and the focus is on learning as individuals, with competition just one part of their growth under expert guidance.

Competing in the Master Class is like the highest level in any motorsport – a team effort. In a matter of a few weeks, Bolton has had to find a cutting-edge raceplane and customize it to his flying style, as well as assemble and guide his team. One of the top technicians in the sport, Arch’s own former team member Nigel Dickinson, is on board Team Bolton to work on the pilot’s Edge 540 V2 raceplane, and experienced communicator Dianne Louwrens joined as Team Coordinator.

“The Challenger Class is the perfect school to become a Master pilot; building on my personal experience, it has allowed me to train, learn and achieve greater efficiency as a racing pilot, and now be able to tackle this new challenge.” Bolton says. “I want to express my appreciation to the organization for all the support I have at this moment, and also to Dianne and Nigel for their confidence in this project we are creating.”

The October race in America’s heartland will be a thriller for Red Bull Air Race fans worldwide: Not only is it the first time the ultimate motorsport series in the sky has taken off at the track famed as The Racing Capital of the World, but as the seventh of eight races on the calendar, the fight for the 2016 championship has come down to a breathtaking struggle between two pilots: Germany’s Matthias Dolderer and Australia’s Matt Hall.

“It’s an honor to race at this true icon of motorsport in the United States,” Bolton declares. “I´m proud to represent my country as the first Chilean in this competition, and I also feel a huge sense of responsibility and pride in representing an entire continent – Latin America – in this demanding sport.”?

Tickets for the Red Bull Air Race stops in the USA are on sale now – including the planned debut of Chile’s Cristian Bolton at Indianapolis Motor Speedway on1-2 October 2016. For information on tickets and all the latest, visitwww.redbullairrace.com. To download editorial content visitwww.redbullairracenewsroom.com

About Red Bull Air Race:
Created in 2003, officially a world championship in 2005, the Red Bull Air Race has held over 70 races and is watched by millions of fans. The Red Bull Air Race World Championship features the world’s best race pilots in a pure motorsport competition that combines speed, precision and skill. Using the fastest, most agile, lightweight racing planes, pilots hit speeds of 370kmh while enduring forces of up to 10G as they navigate a low-level slalom track marked by 25-meter-high, air-filled pylons. In 2014, the Challenger Cup was introduced, giving new pilots the chance to develop their low-altitude flying skills. Throughout more than a decade of innovation, one thing has remained the same: the Red Bull Air Race World Championship is the ultimate motorsport series in the sky.