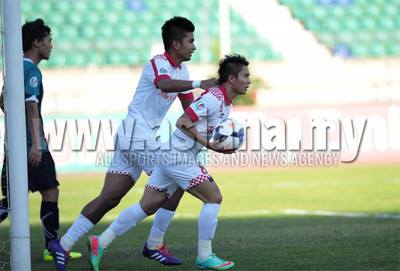 FLASHBACK: Kelantan were at the end of a heavy defeat against Yangon United despite scoring three goals. Picture courtesy of Asiana.my
LOSING 5-3 to Myanmar’s Yangon United in their opening Group G match in Yangon on Wednesday is not the end of Kelantan’s campaign in the AFC Cup.

Coach Steve Darby, however, is a worried man as Kelantan will resume their fight in the M-League on March 8 against defending champions Lions XII at the Jalan Besar Stadium in Singapore and the match will be played on artificial turf.

Three days later Kelantan will be at home to South China in the AFC Cup. The Hong Kong club were beaten 3-1 by Vietnam hopefuls Vissai Ninh Binh at the Hong Kong Stadium in the first match.

This is a worrying factor for the Englishman because he will only get to know who is available when his national players return on March 6– and that includes Lebanese striker Mohamad Ghaddar.

Ghaddar, former Egyptian stalwart Mohamed Shawky and Liberian hitman Francis Forkey Doe did make the trip to Yangon because of injuries. However, Ghaddar, still had to report for national duty despite nursing a hamstring injury.

“I don’t know who will be available for the Singapore trip. It’s a tough match and I need my best players to face the Lions (XII). I am keeping my fingers crossed that all those injured will recover and those who return from international assignments will not report with injuries,” said Darby.

“The foreign players in the Yangon team made the difference. Yangon had all their foreign players playing while we had only one … it had a telling effect on the team and the end result,” Darby told Sports247.my.

The Englishman is concerned with the spate of injuries which have weakened the Red Warriors considerably.

For the record Badhri, better known as Piya scored a brace against Yangon while Wan Zahrul Nizam Wan Zakaria scored the other.

Kelantan are second in the Super League with nine points – one behind new leaders Terengganu – after five matches.

“I hope that my prayers will be answered to have my best players available for the big date at Jalan Besar Stadium,” added Darby.