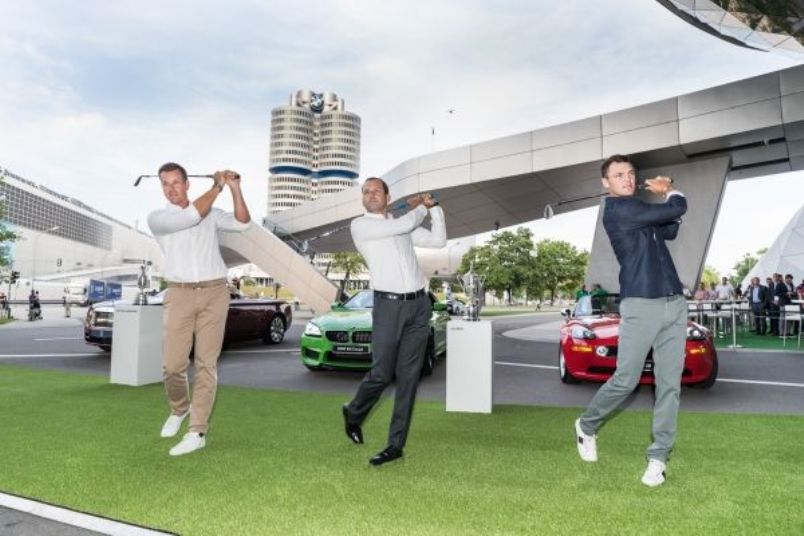 Three major winners arrived at BMW Welt in three iconic cars to kick off the tournament week with a bit of fun. The BMW Major Champion Challenge provided a dazzling opening to the 2017 BMW International Open. Who is champion of champions? This was the question that needed clearing up before the tournament gets underway.

In recognition of major winners Henrik Stenson (SWE), Sergio García (ESP) and Martin Kaymer, who are always up for a bit of fun and a challenge, tournament organiser BMW arranged the BMW Major Champion Challenge to herald the start of the BMW International Open with an engaging competition on a relaxed summer evening. Stenson won the novel chipping competition in front of BMW Welt.

Before the competition got underway, all three players enjoyed the drive from the Hilton Munich Park hotel to the Tee-Off Night at BMW World – a journey made at the wheel of three stunning cars. Defending champion Stenson, who backed up his win at the 2016 BMW International Open with a breath-taking victory at the Open Championship just a few weeks later, drove a British icon: a Rolls-Royce Dawn.

García, the proud owner of the Green Jacket, found the perfect car to go with the most famous item in his wardrobe: a BMW M6 in the BMW Individual colour Verde Mantis. Kaymer, the only German to have won the BMW International Open, opted for a BMW Z8, a classic roadster that was certain to remind him of his emotional victory at Golf Club München Eichenried in 2008.

The three players were travelling with valuable luggage. Stenson brought the Claret Jug (Open Championship) with him, García the Green Jacket (Masters), and Kaymer both the U.S. Open Trophy and the Wanamaker Trophy (US PGA Championship). The complete collection of golf’s most coveted trophies thrilled guests at the Tee-Off Night in the Double Cone building at BMW Welt, at which the groups for the following day’s Pro-Am were drawn. The guests are among the three million visitors per year who come to BMW Welt to find out more about all the brands in the BMW Group in one impressive experience world.

Sergio García: “It was great. Good fun. We enjoyed it. It’s good to be back in Munich playing the BMW International Open again. Every tournament we play is special. Obviously, the Masters is amazing, but that doesn’t mean that this week’s BMW International Open is not a big tournament or important. We come here to play the best we can and to give ourselves an opportunity to win. That’s the plan for the week. Hopefully I can do it on Sunday.”

Henrik Stenson: “We had a fun time here at the home of BMW in Munich. I’ve played this tournament many times and, of course, it’s nice to be back here as defending champion. Munich is a lovely city and BMW always puts on a great show for us. It’s a fun competition here in front of the guests. But still, it’s always nice to put it closer than not. If I can keep Sergio and Martin behind me for the rest of the week, that will be nice too.”

Martin Kaymer: “I only knew the BMW Z8 from the James Bond film, and that was a few years ago. It was very nice to get to drive it now. It is not something you see every day on the roads. The challenge was fun. Events like that are always very nice for the guests, and it is obviously a nice way for us to feel our way into the tournament a little.”