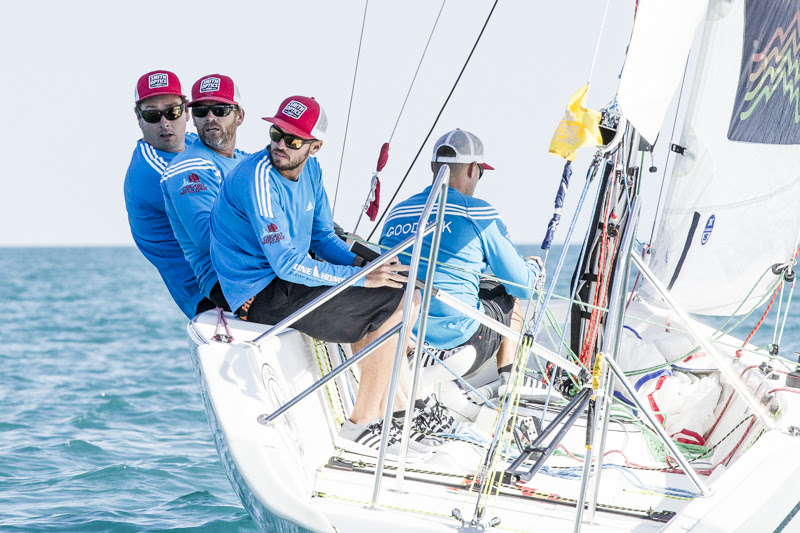 As defending champions of the Chicago Match Cup, Taylor Canfield US One (ISV) today have shown they’ve lost none of their prowess at this venue, leading the pack in Day One of the Qualifying Series on an undefeated 4-0 record. Current Tour leader Ian Williams GAC Pindar (GBR) lost his match to Bjorn Hansen Hansen Sailing Team (SWE) for a 3-1 record, a record also held by Mathieu Richard Lunajets (FRA), Phil Robertson Waka Racing (NZL) and Joachim Aschenbrenner Team Trifork (DEN).

After a morning delay awaiting a light 6-7 knot breeze to fill from Lake Michigan, six flights of this series were sailed today, with 11 remaining to complete this stage of the competition among twelve teams from nine nations.

The conditions were well-suited to the US One team, who have won not only last year’s Chicago Match Cup, but more recently the Chicago Grand Slam Grade 2 event last month.

“We have raced here for many years,” said Canfield, “but still learn something every time we race. Today we were feeling a little weak in our downwind legs, but made some adjustments based on what we saw on some other boats.”

This helped Canfield in his last match of the day against Pierre Antoine Morvan Vannes Agglo Sailing Team (FRA), where he trailed around the first top mark, but gained on the run and managed to take the lead by holding out the French team from getting to the leeward gate.

“Its still early, this is a tough crowd, but it’s good to have some points on the board,” concluded Canfield.

While the wind was light, the action was not, and several matches were decided in part by penalties assessed by the umpires. Just moments into the Williams-Hansen match, for example, an altercation after the start not only had Williams penalized but earning a red flag for a acquiring control of the match from the incident. This required him to do his penalty turn immediately, and thereby cede control of the match back to Hansen, who was able to maintain his lead and take the point.

Asked about the incident, Williams said simply “We screwed up.”

Each of these matches will be important once this stage of 17 flights is completed, as only four teams go through to the Quarter-Finals while the remainder will be determined only after a Repechage round raced on Friday.