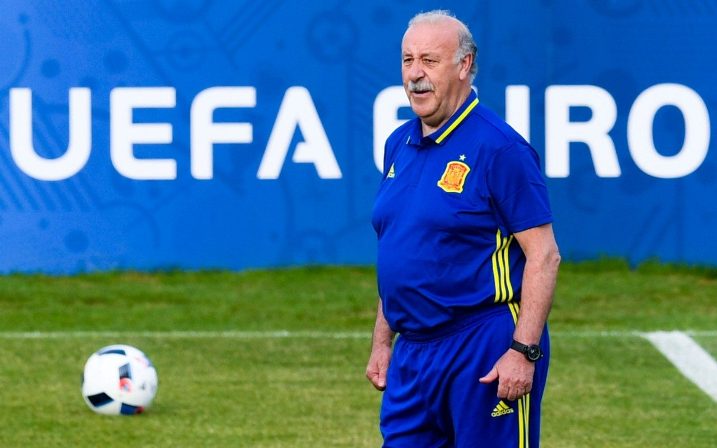 Vicente del Bosque quit as Spain’s coach after the defending champions crashed out of Euro 2016, ending one of football’s most successful managerial dynasties.

Del Bosque, 65, won a World Cup and a European Championship in a glorious era for Spanish football. He also won the Champions League twice with Real Madrid.

His legacy was tainted by Spain’s disastrous first round exit at the 2014 World Cup and now their defeat in the last 16 at the European Championship. Some of the team’s greatest players are also expected to retire soon.

“Without a doubt, I have no intention to remain as coach, but you have to be discreet,” Del Bosque told Spanish public radio RNE late on Thursday.

“No matter what the result of the Euros, I had no doubt about what my future would be.

“I have handled this issue discreetly. But it is a decision that was taken in advance.”

Spain were eliminated from Euro 2016 on Monday after a meek 2-0 defeat to Italy.

Marca newspaper said ex-Granada coach Joaquin Caparros was being lined up to take over the national team.

Del Bosque, who succeeded the late Luis Aragones after Spain’s triumph at Euro 2008, is a popular figure in Spain after guiding the national team to a maiden World Cup victory in 2010 and a second straight European Championship title two years later.

He also overcame the traditional rivalry between Barcelona and Real to maintain a united team on the international stage.

In an age of star coaches, his eight years in charge of a top national team is almost unprecedented in modern football.

Some felt a fresh start was needed after Spain’s failure to advance beyond the group stage at the 2014 World Cup in Brazil. The side lost their first two games and Del Bosque was criticised for his loyalty to the core of players who won in 2010.

The Spanish federation stuck with him, but Del Bosque’s gamble to stay in the job for Euro 2016 did not pay off.

“I had already said it. I had no doubts. It would be hard to win again,” del Bosque said.

“Maybe we did not perform well against Italy. The first stage went well. But the most difficult part would be winning again.”

He said he will remain in his post until his contract expires on July 31.

“On July 31 I will leave football. I will be available to help. I will leave the bench although I will always remain close and will want things to go well for Spanish football. If I can help in anything, I will,” he said.

Del Bosque said no one at the Spanish football federation had asked his advice regarding who should replace him.

Caparros, who has managed a host of Spanish clubs including Villarreal, Sevilla, Athletic Bilbao and Levante, told Marca: “I would be excited to manage the national team, any Spanish coach would be honoured to take this job.”

There has been no official word on del Bosque’s successor however. And among the other names tipped to replace him is former Spain under-21 boss Julen Lopetegui, Granada coach Paco Jemez and former Marseille boss Jose Miguel Gonzalez.

Del Bosque made more than 400 appearances for Real as a player and in four years as the club’s coach from 1999 won the Champions League in 2000 and 2002. He was replaced in part because he was not considered a big enough star. – Agence France-Presse