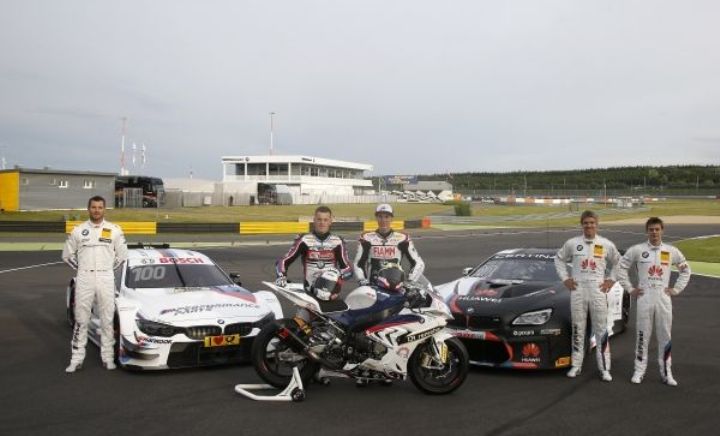 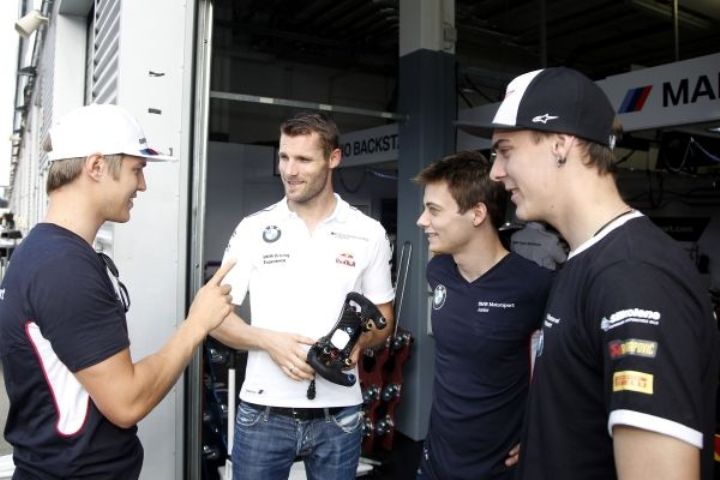 ‘Family get-together’ of BMW Motorsport programmes at the Lausitzring

At the Motorsport Festival at the Lausitzring (DE), the DTM will compete in a joint event with the ADAC GT Masters and the SUPERBIKE*IDM. Together, these series stage one of the racing highlights of the year for fans on German soil. BMW is strongly represented on all three stages. So the Lausitzring is an opportunity for a real “family get-together” of BMW’s racing programmes.

The event kicked off with a joint photo shoot on Thursday. At the EuroSpeedway, BMW DTM driver Martin Tomczyk (DE) took along his BMW M Performance Parts M4 DTM, while the BMW Motorsport Juniors Jesse Krohn (FI) and Louis Delétraz (CH) had their BMW M6 GT3, and the two BMW Superbike riders Markus Reiterberger (DE) and Mathieu Gines (FR) were there with the BMW S 1000 RR.

Then later on, Krohn, Delétraz and Reiterberger were taken on an exclusive tour of the BMW Team Schnitzer garage by Tomczyk. The “family get-together” was rounded off with a joint dinner with BMW Motorsport Director Jens Marquardt.

“The event here at the Lausitzring really lives up to its name ‘Motorsport Festival’,” said Marquardt. “It is great to see how the different BMW racing programmes come together here. DTM stars, experienced GT drivers and BMW Motorsport Juniors meet the guys on their BMW S 1000 RR. A magnificent show is put on for the fans.”

Tomczyk, who is racing in a BMW M4 DTM and a BMW M6 GT3 in 2016, and has also completed a few laps on the BMW S 1000 RR, said: “The BMW family is characterised by a great team spirit among the individual members. It is the perfect opportunity to present the DTM, GT racing and the Superbikes together here at the Lausitzring. It’s fantastic. I meet up with my BMW colleagues from the other series, and also watch the practice sessions, qualifying sessions and races when I can.”

Timo Glock added: “It is fantastic that we have everything from the DTM car through the GT racer to the motorcycle in one place at an event like this. Personally, I really enjoy meeting the BMW Motorsport Juniors, it reminds me of my own time as a BMW Junior.”

This weekend is also special to Krohn: “It is amazing to be part of this terrific show. This kind of event shows me just how large and diverse the BMW Motorsport family is. Meeting the DTM drivers in particular is always special. They are an example of the direction in which the BMW Motorsport Junior programme can take me.”

Reiterberger who, as the reigning IDM champion, contests the MOTUL FIM World Superbike Championship on the BMW S 1000 RR this season, came to the Lausitzring as a spectator and did not want to pass up the opportunity of meeting the other members of the BMW family.

“I was still racing in the IDM the last two years that we competed alongside the DTM here. Now I have the time to look at all of the different BMW activities in more detail and to talk shop at length with my colleagues in the four-wheel camp,” said Reiterberger.

“It is interesting to see the technology and the processes in the DTM and in GT racing – there are parallels with us, but also a lot of differences. I’ve got my fingers crossed for all the BMW drivers in the DTM, the ADAC GT Masters and naturally the riders in the IDM, so that we have plenty to celebrate this weekend.”