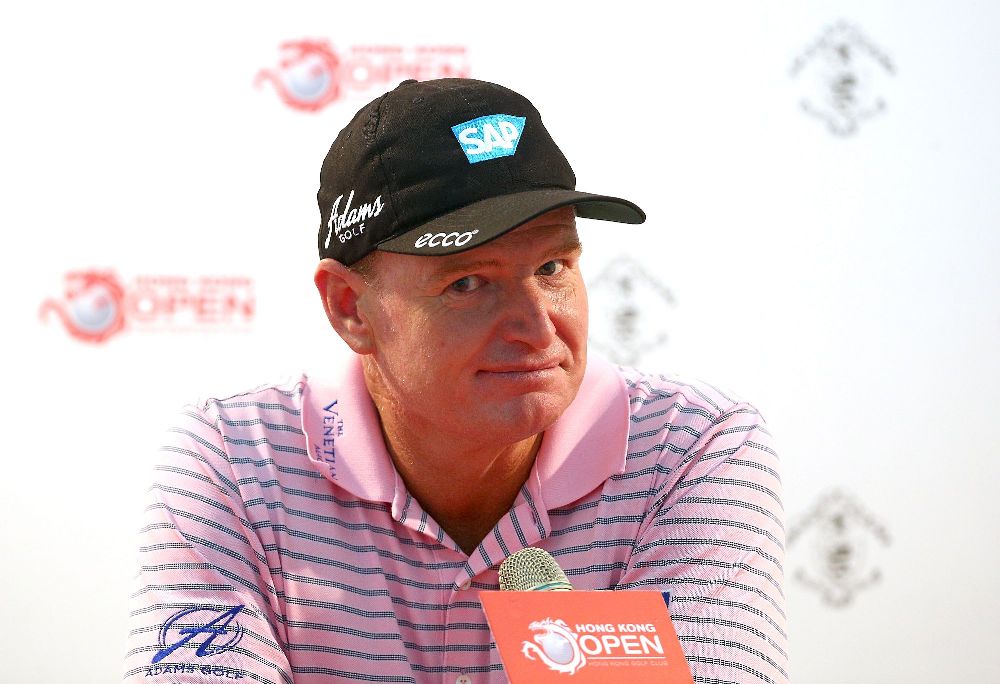 Ernie Els of South Africa aims to kick-start a four-week Asian swing by winning the US$1.3 million Hong Kong Open which starts on Thursday.

The four-time Major champion will be making his first appearance in the 56th edition of the prestigious event at the Hong Kong Golf Club before heading to Macau, Malaysia and China.

Reigning Asian Tour Order of Merit winner Kiradech Aphibarnrat of Thailand, Anirban Lahiri of India, Prom Meesawat of Thailand, who finished second last year and Nicolas Colsaerts of Belgium will also feature in the event sanctioned by the Asian Tour and European Tour.

Els, nicknamed the ‘Big Easy’, last played in Hong Kong 18 years ago and he is eager to stop Jimenez from winning the Hong Kong Open for a record fifth time.

“Miguel, I think his record speaks for itself, winning here four times.  He obviously loves the layout and knows the greens.  So I’d love to play with him over the weekend.  I know he’s going to be up there on the leaderboard,” said Els.

“I’m actually quietly optimistic about my game and quite excited about my game. But I’d love to get it going here this week and see what Miguel and the rest of the crew does out there,” added the South African, who turns 45 on Friday.

Els accepted an invitation to become an Honorary Member and International Ambassador of the Asian Tour in 2013, a title which he holds in high regard considering his close affinity to Asia.

“I can see obviously the Asian Tour growing, and golf is so popular out here, not only men’s golf but really a lot in women’s golf, as well.

“People love to play the game of golf out here, and you know, The European Tour, saw the vision, years and years ago to come out here and start getting tournaments together, co sanctioning with the Asian Tour.  I think it’s been a very positive move,” said Els.

After taking a two-week break, India’s rising star Lahiri is feeling refresh ahead of the Hong Kong Open. The four-time Asian Tour winner claimed his best result here after placing tied 12th last year and is upbeat of his chances this week.

“I’m starting to like the golf course and understanding how to play it. I needed that two-week break very badly. It was starting to get to me. I haven’t been playing golf in the last 10 days and spent a lot of time with the family. I’m relaxed and hungry to do well,” said the 27-year-old Lahiri.

Current Order of Merit leader Lipsky, who won the Omega European Masters in Switzerland last month, fancies his chances at the Fanling course.

“I really like this course. I’m excited for the week to start and I think it is one of the best courses we play on the Asian Tour. This is a place where I’m comfortable at and where I feel that I can do well,” said the Korean-American.

The 26-year-old added, “When I won for the first time, it was hard to forget about it but now I’m getting used to it and trying to stick to my routine and take care of business. I’m trying to get back to the process of getting better in my golf game.”

“I have a big goal this week because I want to finish as high as I can on the Order of Merit and qualify for the WGC-HSBC Champions and CIMB Classic,” said Kiradech, who is ranked ninth on the Merit list.

“It is going to be a tough week because the top-10 on the Order of Merit is very tight. It is going to be very interesting this week. I don’t have any pressure because of this. I’m playing well so I’m quite confident to finish high here,” he said.