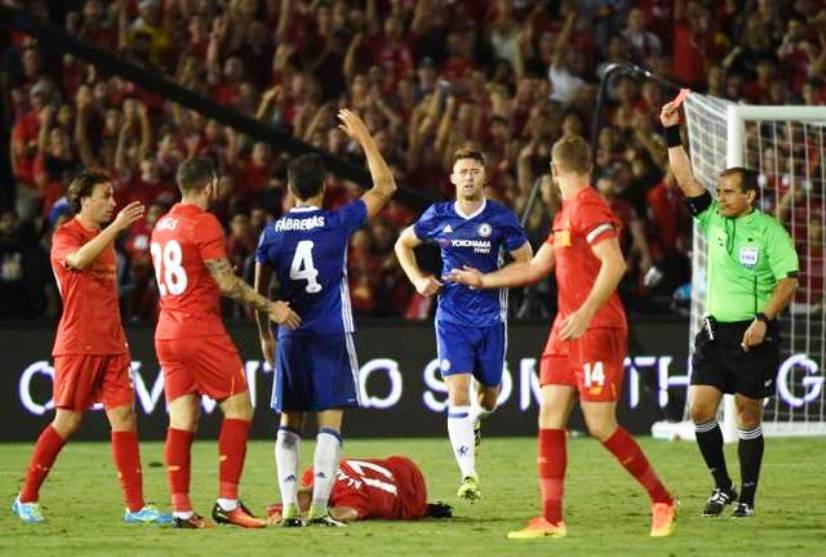 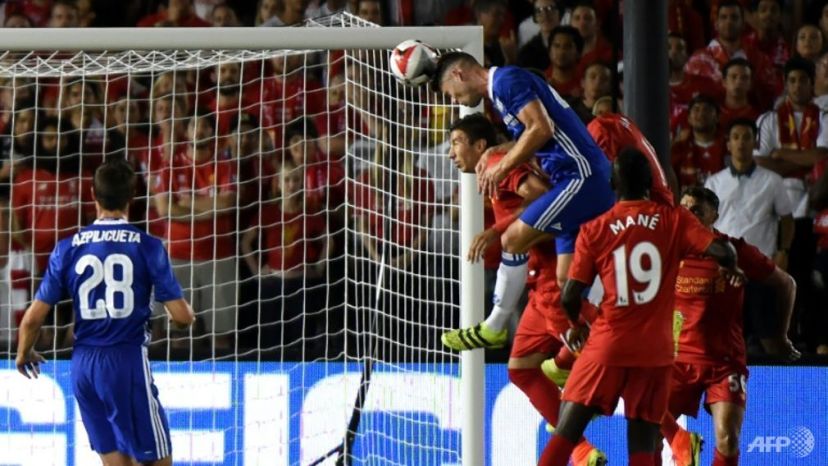 Chelsea’s Cesc Fabregas was sent off for a reckless lunge at Liverpool new boy Ragnar Klavan, overshadowing a 1-0 friendly win at the Pasadena Rose Bowl on Wednesday.

The Premier League giants locked horns in the pre-season International Champions Cup in a match which was more remarkable for its clumsy fouls than free-flowing football.

Spanish midfielder Fabregas, 29, could have no complaints as he got his marching orders in the 70th minute for sliding late into Klavan with his studs up.

By then Californian referee Baldomero Toledo had already been forced to show yellow cards to four Liverpool players — with another to come — and one to Chelsea’s Gary Cahill.

Chelsea’s new head coach Antonio Conte told reporters after the final whistle the match was more competitive than he had been expecting, apologizing for Fabregas’s foul.

“I think that in this period, the fatigue sometimes can bring a (player) to go too late,” he said.

“I know Fabregas is a good man, a good boy and is not a player to have this type of situation. I’m sorry for him, I’m sorry for the Liverpool player.”

Klopp said Klavan had escaped unscathed from the challenge but revealed that fellow recruit Marko Grujic was in hospital after receiving a knock to the head in the first half.

“He can’t remember anything… The situation’s not too cool but injuries happening in games like this in the pre-season, that’s the biggest problem.”

Klopp denied that the game had more edge than a normal pre-season clash, but added: “It was far away from a friendly game, and that’s okay.”

England defender Cahill got the 53,000 crowd going in the 10th minute when he rose above several Liverpool defenders to connect with a Fabregas corner for an all-too-simple header.

Liverpool looked the more enterprising side for much of the game, creating chances and dominating possession, but they lacked a cutting edge up front with striker Daniel Sturridge deemed unfit.

Liverpool’s best chance came in the first half when Chelsea’s Brazilian winger Willian gave away a throw inside his own half and left-back Alberto Moreno was played in down the left.

The 24-year-old Spaniard cut it back for Roberto Firmino, who got the ball stuck under his feet and couldn’t pull the trigger.

The striker had a goal ruled offside minutes later after finishing off a gorgeous exchange of back-heel passes.

Liverpool pushed for an equalizer in the later stages, but they were unable to break down a deep-lying Chelsea defense.

The International Champions Cup is an exhibition tournament involving 17 clubs playing on four different continents, all tuning up for their league seasons.

Sturridge did not join Liverpool’s traveling party to Southern California, staying at their base in Palo Alto to complete extra training sessions.

Reds fans had been hoping to see Georginio Wijnaldum after the Netherlands international became the club’s sixth summer signing following his arrival from Newcastle, but he was left out.

The £25 million ($33 million, 30-million-euro) buy is on an intense training programme designed to ensure he can match the fitness levels of his teammates, according to the Liverpool Echo.

Also missing were Belgian forward pairing Christian Benteke and Divock Origi, who are focusing on fitness after extended leave following their involvement in Euro 2016. – Agence France-Presse