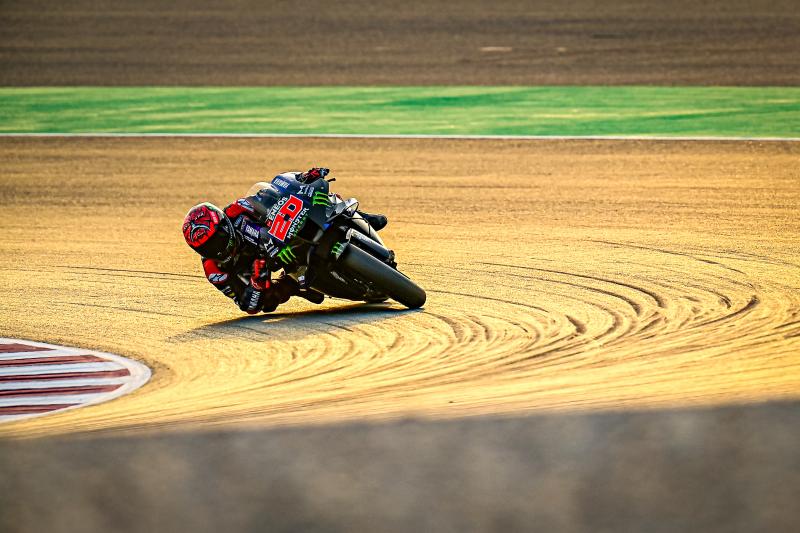 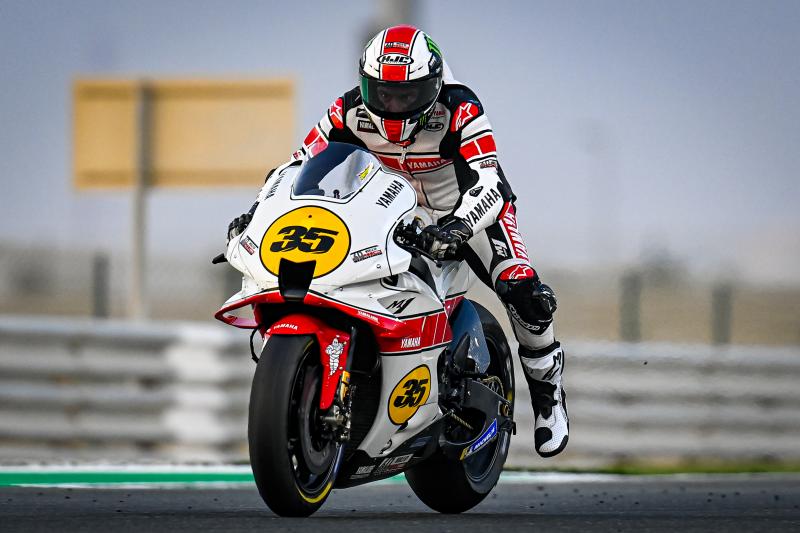 Maverick Viñales made it two Monster Energy Yamaha MotoGP bikes inside the top three as the Qatar Test revved into life on Wednesday.

Thankfully for all the riders and teams, the second leg of the Qatar Test was greeted by the best weather conditions we’ve seen since the paddock landed in Doha. The wind wasn’t causing issues, the sun was shining and the riders were rearing to get going again after Monday and Tuesday on the sidelines.

After seeing the factory riders testing the intriguing new Ducati aero, Zarco was today giving it a whirl in Losail and judging by the timesheets – if indeed his best laps were with it on – the Frenchman was feeling good. Miller was sitting top of the timesheets for quite a substantial amount of the afternoon, until Quartararo slammed in his rapid time.

So far, so good for Miller in Qatar who headed out at the end of the day, did a flying lap, went top, and pitted again. Confidence flowing on the Australian’s side of the garage. Miller said his best lap felt “mega” and described the conditions as “perfect” and he got through all the things he needed to get through on Wednesday.

Francesco Bagnaia (Ducati Lenovo Team) ended Day 3 in P9 as the third fastest Desmosedici rider on track, 51 laps were completed by the Italian and he finished 1.053s off Miller’s time. Bagnaia was concentrating on his longer run pace and made a big step compared to Sunday, and Pecco was pleased with his Wednesday’s work.

Fourth fastest Zarco was “pretty happy” with the progress being made, and the Frenchman added that the GP21 has “huge potential” – promising signs for the Bologna factory.

The other two rookies are looking great too. Jorge Martin (Pramac Racing) improved his previous best time by half a second and has been checking Miller and Zarco’s data, confirming that in “three or four corners” he could immediately go faster. Martin placed P19 with a 1:55.010, with Luca Marini (SKY VR46 Avintia) three tenths behind Martin in P22.

In the Yamaha camp on Day 3 of the Official Test, as well as Yamaha’s stunning white and red 60th Anniversary livery, a new mudguard and front fork covers were seen being tried. The reasoning is unknown to us, but it could be to create smoother airflow into the radiator to potentially increase top speed. The riders were also doing back-to-back runs on the new and old chassis to get some final confirmation on if any improvements have been made.

The factory duo strutted their stuff in the closing stages to finish P2 and P3, with Viñales completing the most laps of anyone on Day 3 at Losail. The Spaniard did suffer a crash at Turn 1 but thankfully he was unharmed, and Viñales was apparently doing plenty of practice starts at the end of pitlane – an area to work on for sure.

Overall, a good day on paper for both Quartararo and Viñales. The former said that he’s found some good pace on used tyres and he was very happy about his fastest lap on the new chassis, and his day – in general – was really good, despite Miller beating his effort.

Petronas Yamaha SRT’s Franco Morbidelli and Valentino Rossi both finished outside the top 10, the Italians were 1.1 and 1.4 seconds adrift of the best time respectively, but that shouldn’t be looked too much into. Rossi’s main concern was the rear grip on Sunday evening, and The Doctor also said that the new chassis was much closer to the 2020 one, rather than the 2019 one. An intriguing couple of days are coming up for the Iwata factory, that’s for sure. 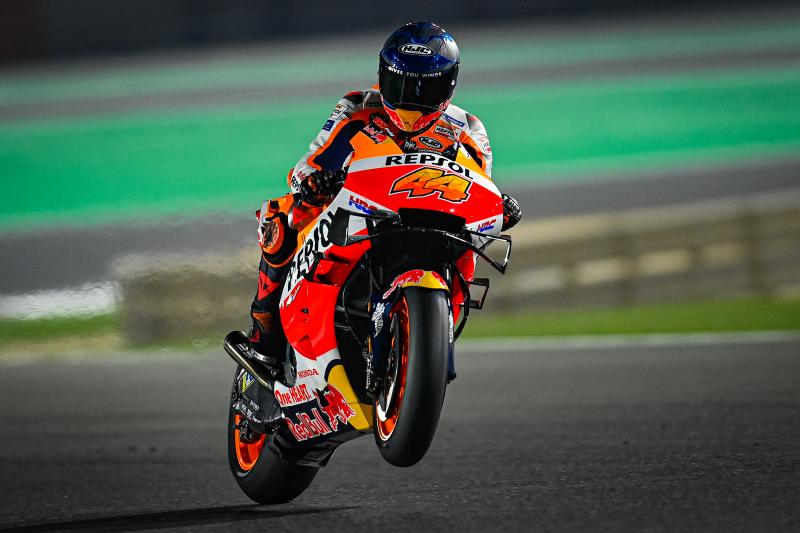 Pol Espargaro’s adaptation to the Repsol Honda Team machine continues to be seamless. The Spaniard was leading the way at midday and eventually snuck into the 1:53s on just his third day on the RC213V. Already, Pol Espargaro is nearly half a second quicker than he was on the KTM at Losail last season and just half a second shy of Marc Marquez’s all-time lap record in Qatar.

The number 44 was also seen using Honda’s carbon bonded chassis, it seems the Japanese factory have chosen this as the way forward. 53 more laps were completed by Espargaro on Day 3, another fantastic day at the office.

Stefan Bradl’s Day 3 ended early after a crash at Turn 2, the German was reported to have pain in his neck and decided to sit out the rest of the day. LCR Honda Idemitsu’s Takaaki Nakagami also crashed, as did LCR Honda Castrol’s Alex Marquez – that’s now seven crashes between them in the Qatar Test.

Nakagami was the quicker of the two and snuck into the top 10 on a day where he tested some new items, the Japanese rider reported that they were working very well in some areas. More time is needed, according to Nakagami, to confirm which chassis is the one to go with. He has a “much better” feeling on the bike than on Saturday and Sunday, teammate Alex Marquez finished P15 on the timesheets.

Aleix Espargaro and Aprilia Racing Team Gresini once again ended the day towards the summit of the times. The all-new RS-GP in the hands of the Spaniard ended the day P6, but Espargaro completed the lowest number of laps of any full-time rider – 31.

A couple of technical issues and a small crash on new tyres hampered his day, and the Spaniard is hoping for fewer problems tomorrow to complete the programme and do a race simulation. MotoGP™ rookie Lorenzo Savadori completed 39 laps to finish the day 25th, another day of valuable track time for the Italian. 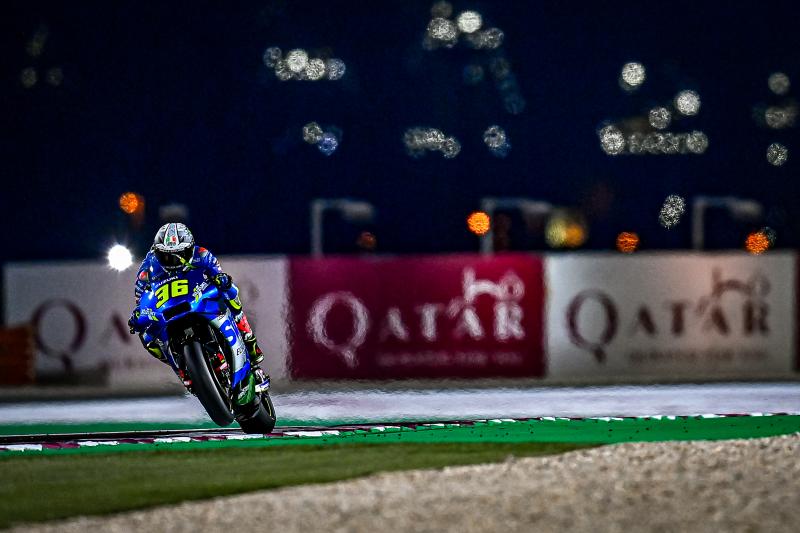 World Champions Team Suzuki Ecstar were seen with an extra set of fairings on the side of their bikes, with Joan Mir and Alex Rins claiming P7 and P8 on the timesheets. Between them, 120 laps were put into the 2021 GSX-RR as the Hamamatsu continue to rattle through their busy testing schedule in Qatar.

The big focus so far has been a new chassis and we’re still no nearer to knowing whether Suzuki have fixed their main 2020 problem – one-lap pace. It’s difficult to say whether the duo pushed for a quick lap like Miller, Quartararo, Viñales and potentially some others did, it seems like the blue machines haven’t yet shown their hand in pre-season testing.

The South African was uninjured but P20 isn’t where he would have expected to be at this stage, but Binder said he’s feeling more comfortable on the new bike and the team have a good direction to work in. A new swingarm and mudguard – that test rider Dani Pedrosa has been testing – has been spotted on Binder’s bike, with the KTM runners also using the new, skinnier fairing once again.

Tech3 KTM Factory Racing’s Danilo Petrucci and Iker Lecuona were P17 and P21 on the timesheets respectively, with Lecuona suffering a small crash at Turn 2 early doors. Lecuona is expecting Thursday will be better and admits he need more time with the bike, the Spaniard has tried many new parts during the test and wants to improve his lap time in the remaining two days.

The penultimate day of pre-season testing will be coming your way on Thursday afternoon from the Losail International Circuit, follow every lap with Live Timing from 12:00 CET. Analysis, reaction and interviews are coming up on After the Flag LIVE at 18:30 CET, make sure you don’t miss that too.