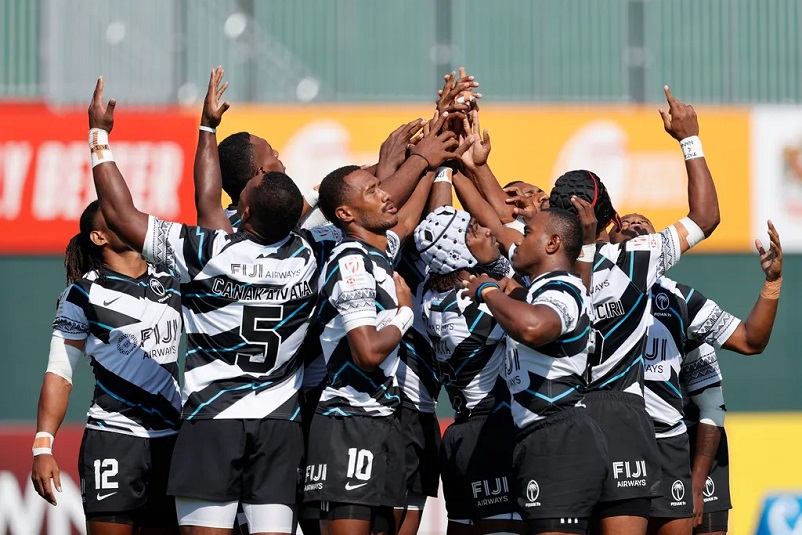 The fast-paced, end-to-end entertainment of rugby sevens returned to the international stage as the first day of the Emirates Dubai 7s showcased spectacular skills and introduced a number of new stars to the scene as the HSBC World Rugby Sevens Series 2022 began with a bang.

South Africa and Fiji raced out of the blocks as the reigning Series winners and Olympic champions won every game to reach the quarter-finals as unbeaten Argentina also won their Pool, while Australia and Great Britain got off to perfect starts in the women’s competition.

South Africa’s men lived up to expectations with a perfect start to their bid for glory on the opening day of the Emirates Dubai 7s, while Olympic champions Fiji earned a stunning late win over Australia to record a hattrick of victories.

The Blitzboks, who are aiming for a fifth Series title this season, showed their class in wins over Ireland, Japan and Great Britain that set up a mouth-watering quarter-final against third seeds Australia.

Not to be outdone, a Fijian side featuring just two players from the squad that won gold at the Tokyo Olympics defeated France and Canada before scoring a match-winning try in the final play of the game to take top spot off Australia.

New Zealand’s men’s and women’s teams, winners of their respective Series titles in 2020, are unable to participate due to Covid-19 travel complications, but there was no shortage of quality on show in Dubai ahead of a huge year for the sport, with the Commonwealth Games in Birmingham and Rugby World Cup Sevens in Cape Town coming up in 2022.

Argentina’s men went unbeaten to top Pool B and earn a place in a quarter-final lineup that was completed by Australia, USA, Great Britain, Ireland and Kenya.

In the women’s event the ten teams are divided into two pools of five teams with each team playing each other in the pool. The pool placings will decide the classification matches, with no quarter or semi-finals, meaning the teams who top their respective pools will contest the gold medal final.

Great Britain and Australia both won back-to-back matches to get off to a flyer in the women’s event, but both of the five-team pools remain wide open ahead of their completion on Saturday.

Olympic silver medallists France finished the opening day of the Emirates Dubai 7s on top of a fiercely contested Pool A, but a surprise defeat to the USA could cost them first place after Australia’s perfect start.

Fiji currently lead Pool B having played three games, but the Olympic bronze medallists 29-17 defeat to Russia in the final game of the day left top spot open to a Great Britain side that started their campaign with a pair of victories.

The USA and Spain will get the finals day action under way at 09:00 local time (GMT+4) on Saturday in a women’s Pool A match.

The men’s Cup quarter-finals begin with a clash between Pool B winners Argentina and Ireland, the best third-placed side, at 10:28 local time.

That will be followed up by a mouth-watering battle between tournament favourites South Africa and third seeds Australia at 10:50, with the Blitzboks looking to defend the Dubai title they won when the tournament was last played in 2020.

If the South Africans win their quarter-final, they will equal their best-ever World Series winning streak of 16 matches, set back in 2008-09.

Great Britain take on 2019 Dubai runners-up USA at 11:12, before the last eight clashes conclude with what promises to be a hugely entertaining meeting between Fiji and Kenya at 11:34.

The cup semi-finals are scheduled for 14:18 and 14:40, sandwiched between the semi-finals and playoffs to decide the 11th, 9th, 7th and 5th place finishers.

The bronze final is set for 18:29, before the tournament concludes with the showcase gold final at 19:26.

In the women’s event, the remaining Pool fixtures begin at 09:00 when USA will look to go joint-top of Pool A by beating Spain.

Australia’s clash with the in-form Brazilians at 09:22 promises to be an interesting watch, while there are two unmissable clashes between Pool favourites when France face Australia at 12:23 and Great Britain take on Fiji at 13:07.

The two Pool winners will face off in the Cup final at 18:56, after the conclusion of the play-offs and the bronze medal match between the two Pool runners-up at 18:07.

Australia are the only team among the 10 competitors who have previously won the Dubai title, while Canada have finished second at the last two events and USA, Russia and South Africa have all taken silver – the latter not being involved this time. – WORLD RUGBY