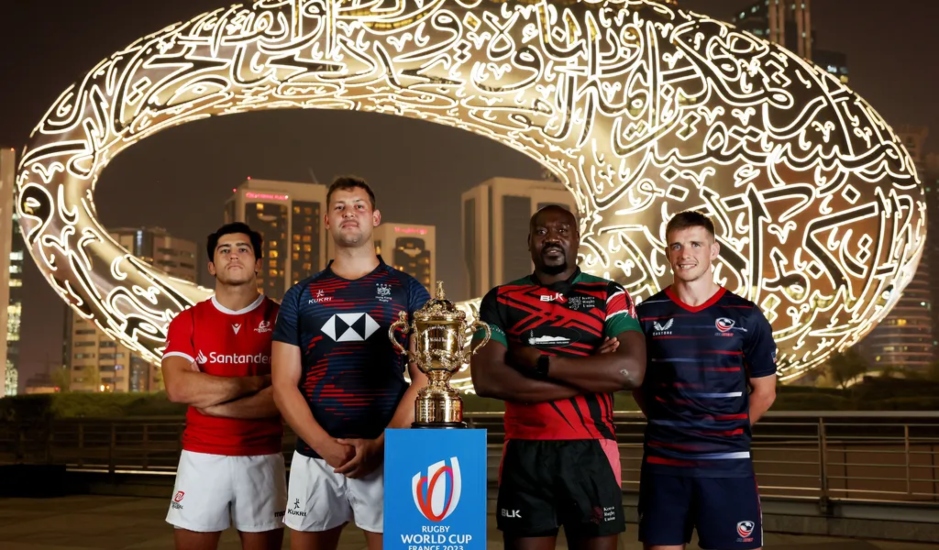 USA faces Kenya for the tournament’s opener at the Sevens Stadium on Sunday, 6 November at 16:00 (GMT+4)

Teams’ media activities are delivered in person and virtually, with full details available on the tournament calendar

Captains from the four participating teams have gathered in front of Dubai’s iconic Museum of the Future ahead of a Rugby World Cup 2023’s final qualifier, which is kicking off on Sunday 6 November at the Sevens Stadium.

Played over three match days, Hong Kong, Kenya, Portugal and USA will face each other in a round-robin format with the team accruing the most competition points securing the 20th and final spot at France 2023 and taking their place in Pool C alongside Wales, Australia, Fiji and Georgia.

USA have the richest Rugby World Cup pedigree having competed in every tournament bar one when they missed South Africa in 1995. Portugal are the only team of the other three to have appeared on the game’s grandest stage before – at Rugby World Cup 2007 – and will be hoping to book a return to France next year.

Portugal captain Tomás Appleton said: “We feel pretty confident, we have been talking about it for a long time and our objective is to qualify for Rugby World Cup. We look at these three games as three finals but we have to start with the first game against Hong Kong, we are very focused on that one. Qualifying would mean the world to the rugby community back in Portugal, they have been waiting for it for a long time. We just want to be present.”

Kenya captain Daniel Sikuta said: “It’s a great honour to be here in Dubai, it is personally my fifth time in the country having been there with the sevens. It’s a good feeling and we are very happy to take this opportunity, do our best and try to qualify for Rugby World Cup 2023. Everyone in the team is very excited, we lost against Namibia in the Rugby Africa Cup in France and this is our second opportunity to qualify so we will stick to our plan as a team. We will treat every game as a final but the first challenge is the USA. We need to be a team, in control, and take every opportunity at every minute, every second and see what happens after 80 minutes.”

USA Captain AJ McGinty said: “We feel pretty good, it is an incredible place and preparations have been very good. Qualifying means everything, as a young kid playing the game this is what you dream of. This opportunity ahead of us is a massive one, I feel privileged to be here and excited to get going. We have had five weeks to get there in camps so the mood is good, the lads have worked really hard, building confidence, and we are excited about the games ahead.”

Hong Kong Captain Josh Hrstich said: “We are super excited about the opportunity ahead, we want to make the most of it and make Hong Kong proud. Qualifying would be a dream come true, a combination of work from so many people would mean a lot to everyone. It is just around the corner, it is becoming a bit more real and the boys can’t wait.”

Fans will be able to watch the six matches live either on TV in selected markets or on the Rugby World Cup 2023 website elsewhere. Supporters already in Dubai can also come and watch the matches for free at the Sevens Stadium.