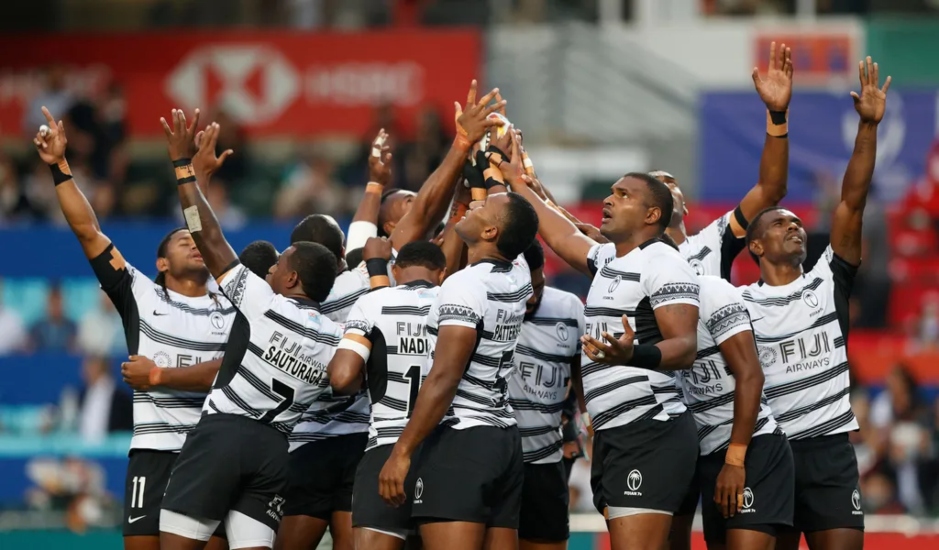 Day two kicks-off at 11:00 local time (GMT+8) with the rest of the pool phase action before finals day on Sunday

Hong Kong is the first of 11 rounds in the men’s 2023 World Series, the women’s Series begins in Dubai on 2-3 December

More than 23,000 fans were in celebratory mood as the much loved Cathay Pacific / HSBC Hong Kong Sevens returned to Hong Kong Stadium on Friday for the first time in more than three years.

As the first of 11  tournaments, Hong Kong is not only the launchpad for the men’s HSBC World Rugby Sevens Series 2023, but also Olympic qualification, with the top four teams at the end of the season securing their tickets to the Paris 2024 Games.

The players fed off the crowd’s enthusiasm with some inspired performances including reigning HSBC World Rugby Sevens Series champions Australia who ruthlessly overpowered Hong Kong 43-0 in the final match of the day, but they weren’t the only side to impress.

Samoa’s 24-0 win over New Zealand, also in Pool A, marked them down as serious contenders, while Pacific rivals Fiji looked comfortable in their second home, as they began their bid for a sixth straight Hong Kong title by racking up a half century of points against Japan.

France and South Africa top Pool B after wins over Great Britain and Uruguay respectively, USA edged out Spain to join Fiji at the top of Pool C and Argentina and Ireland both kicked off with wins in Pool D.

Australia captain Nick Malouf said: “It’s always good to get a few points in the first game, I guess, build some confidence. I thought we did really well, controlled the footy in the first half. And then when we had some passages where we had to defend well, we did that as well. So all in all a good start.

“The atmosphere in the stadium was fantastic. I think today was just an entree, I think Saturday and Sunday is going to be even bigger and better. It’s going to be heaving out there. A fantastic atmosphere to play in, especially against the home team. We have a couple of big games tomorrow and it’s going to be an interesting pool after Samoa knocked off New Zealand.”

Samoa coach Brian Lima said: “We have played New Zealand a few times and we hadn’t beaten them. For 11 of the boys it is their first Hong Kong tournament and they were looking forward to playing New Zealand. It’s a good start for the boys.”

South Africa’s Selvyn Davids said: “It’s great to be back in Hong Kong, we knew they were going to come after us, they are not a bad side at all, no team is on the sevens circuit anymore, so it was a great effort from the boys to keep fighting until the end.”

France hat-trick try scorer Aaron Grandidier said: “Credit to the team, the boys put me in open spaces and it is just my job to finish them off and luckily I could help the team to a victory.”

The HSBC World Rugby Sevens Series 2023 promises to be the most competitive and exciting Series to date with more at stake than ever before as the top four ranked men’s and women’s teams will earn Olympic qualification for Paris 2024.

At the other end of the table in the men’s competition the number of teams for the 2024 Series will reduce from 16 to 12 to equal the number of women’s teams and align with the Olympic competition structure, meaning fans can expect an intense battle to avoid relegation throughout the 2023 Series with every match and every point counting towards the final Series rankings.

Play continues on Saturday with the completion of the pool stages, before finals day on Sunday.

Saturday’s action kicks off with Ireland v Canada at 11:00 local time (GMT+8) with Match 16 – Australia v Samoa – looking like one not to miss at 14:00. The last match of the day at 18:03 is set to be a blockbuster as rivals Australia and New Zealand face each other in the final pool A encounter.

The women’s Series begins in Dubai as part of a combined event on 2-3 December 2022. – WORLD RUGBY